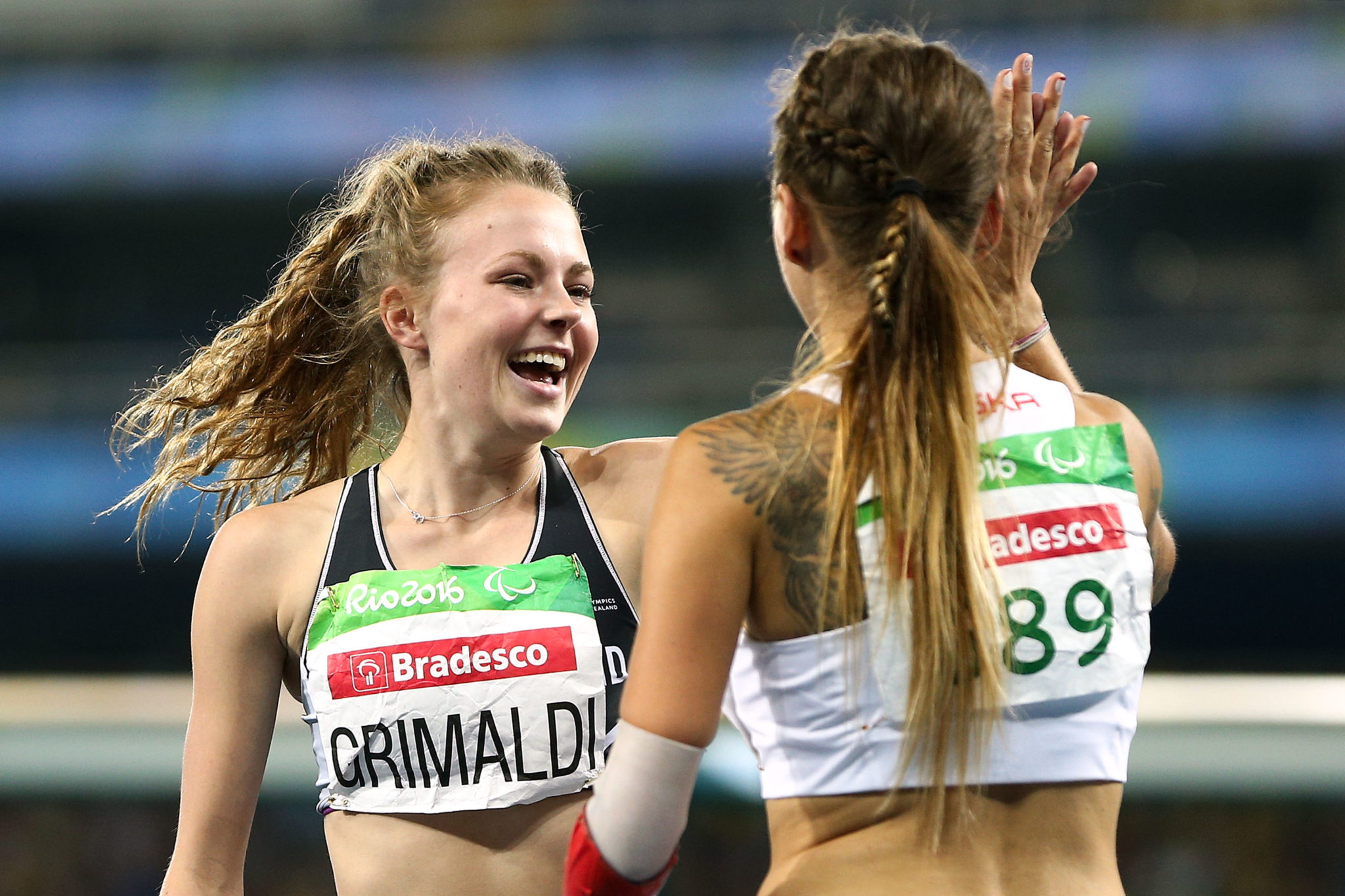 Paralympic champion Anna Grimaldi is currently in the form of her life after already snaring two national records in the F47 long jump this summer. She speaks to Steve Landells about how her challenging journey since Rio has helped forge her current success.

Before tasting very recent pleasure, it is fair comment to say Anna Grimaldi has had to endure a fair amount of pain.

At the age of just 19, the Dunedin student caused a sensation by striking an unexpected and heart-warming F47 long jump gold at the Rio Paralympics four years ago.

Yet, after that golden moment, Anna’s career stalled due to a challenging period of injury woes which impacted on her form and confidence.

But the tenacious long jumper never lost faith. Backed by a top-quality support team led by coach Brent Ward, she returned to the global podium when winning silver at the 2019 World Para Athletics Championships.

And she has recently built on that performance by twice bettering her national F47 long jump record in a sensational start to the 2020-21 domestic campaign.

“It has been a really exciting start to the season,” explains Anna, who leapt a PB of 5.68m at the Caledonian Ground in mid-October before adding a further 4cm to this mark just a few days later at the same venue.

“I wasn’t expecting to start the season quite like this. It has been really awesome because it shows the pieces are finally coming together after all the hard work I’ve put in over the past few years, which is really nice.”

To fully understand the journey Anna has undertaken, we need to first head back to the 2016 Rio Paralympics. Anna had impressed in the countdown to the Games and was targeting a medal but had not entertained the prospect of standing on top of the podium.

Yet, inside the Olympic Stadium, she elevated herself from third to gold courtesy of a dramatic sixth-round jump and national record of 5.62m.

“I don’t think I was mentally prepared for that to happen. If everything went well, I had thought about winning bronze or maybe silver, but it never crossed my mind I’d win gold,” Anna admits.

“To win the Paralympic title was like one of those out-of-body experiences. Given my age and that I was not the best athlete on paper, I even questioned whether I deserved to win.”

Taking this load and pressure into the 2017 season, at the beginning of that year she started to encounter problems with her foot.

Undoubtedly the injury limited her ability to perform to her best and she became increasingly anxious after the foot issue, which worsened during the World Para Athletics Championships pre-camp in Townsville.

By the time she arrived to compete in London for the World Championships she was emotionally drained from the experience. But, despite the acute physical and mental challenges she faced in the British capital and competing in pain, she still managed to place a creditable fourth with a best of 5.21m.

“I pushed it as hard as I could on the day and, given the circumstances, I was proud of my performance. But, although I tried my hardest, it was frustrating to finish fourth. I felt totally deflated from that trip.”

On her return to New Zealand, she underwent a scan which diagnosed a stress fracture of the navicular. Put in a cast for eight weeks and later a moonboot for a further four weeks, she was initially told the injury would take six months to heal.

However, by the following April the injury had shown little sign of fully healing and doctors advised that by the end of the month surgery would be an option.

“It was a scary process and for a while I was lingering on the edge (of undergoing surgery),” admits Anna. “But instead of surgery we took the decision to slowly return to training to see how it went.”

Wisely adopting a very gradual return to full fitness, Anna says she underwent a heap of foot-strengthening exercises as recommended by the podiatrist. She describes the process as mentally frustrating but, crucially, the injury started to heal and thanks to the help of her support crew – led by Ward and strength and conditioning coach Michael Jacobs – she managed to navigate a route through this difficult period of her career.

“Brent was amazing in that he has always made me see the bigger picture. Throughout the journey he stepped up to be so much more than a coach,” explains Anna.

“Mikey was also amazing. I had strong feelings about everything, I was always able to give an opinion. It was super important I had the long-term goal of Tokyo to work towards. This meant I didn’t have to rush things. This allowed us to put in the mental and physical preparation that otherwise we wouldn’t have had the time to do. Without that community of people I wouldn’t have been able to do it.”

Yet the road back was long. During the 2018-19 domestic season, understandably given her preparation and return from injury, she struggled to recapture her best form.

She had high expectations but describes the season as tough – more patience would be required.

“I competed really well early on but the rest of the season didn’t pan out how I hoped,” she says. “I was still recovering from the trauma of the stress fracture and the circumstances. My body was not quite there yet.”

Yet the green shoots of recovery could be seen in the middle of 2019 during a two-week period in Australia. It was here she said for the first time post-injury she could jump uninhibited. Excited, she looked confidently ahead to the World Para Athletics Championships in Dubai later that year.

Training continued to progress nicely. In pre-camp she was jumping in the 5.40ms, only for sickness to strike two days before competition.

Yet Anna was determined for the cold not to derail her ambitions. She focused on good sleep and hydration before the final to put herself in the best possible position to compete well.

Despite a world ranking outside the top three, she dispelled predictions to produce a wonderful competitive display to win silver with a best of 5.50m – just 2cm behind gold medallist Kiara Rodriguez of Ecuador.

The performance earned the construction management student a welcome return to the podium and represented rich reward after nearly three full years of struggle.

“The overriding feeling from that competition was relief,” she says.

“I had been holding on to so much tension. The weight of the last three years of training had all built up to that moment. That is the moment when I felt like an international long jumper once again.”

She describes the 2020 domestic campaign as her most consistent, including a confidence-boosting season’s best of 5.55m – within just 7cm of her national record set at the Rio Paralympics.

But the global pandemic forced the postponement of the Tokyo Olympics and a re-think of her plans.

She says her previous experience of the foot problem aided her adjustment to life under lockdown as she was once again forced to adapt and set a list of new goals. She managed to grab some gym equipment from home, had the option of training at a nearby park and took the positives out of the changing circumstances.

“My team were amazing once again and we branched out to try some different things,” she says.

“We refocused in a different way. It was a tough time but also a special opportunity to get in a full winter’s training when normally we have to peak twice during the year (for the New Zealand summer and Northern Hemisphere summer). It was also a unique chance to be around family and friends.”

A much stronger athlete both physically and mentally for her experiences since Rio, she feels all the pieces of the puzzle have come together during her dazzling early-season form.

She opened up with a stunning national record leap of 5.68m in Dunedin. Five days later, she added 4cm to the mark and, at her most recent appearance on Halloween, produced the longest leap of her career so far, breaking the sand at 5.77m – although this will not count as a record or PB due to the wind being above the allowable limit of 2.0m/s.

“In training we could tell I was in a better space than I was last year,” Anna explains.

“I was nervous before my first competition but this season has already been such a confidence boost. It has been good because I’ve had Rio hanging over for me some time now as my peak. I was aged only 19 at the time but I think the rocky road I’ve had to take since then has helped me become a better athlete. I feel like I’m on such a good path on the road to Tokyo.”

She plans several more competitions in November, concluding with the Rhythm and Jumps event in Christchurch, before taking a one-month competitive break in December to focus on training.

Anna will then look to make an impact in the new year, climaxing with the New Zealand Track and Field Championships in Hawke’s Bay in March.

“I’ve felt this huge pressure over the past couple of years to get back to my best and prove myself,” she explains.

“I feel very happy with where we are at. I’m in a healthy and happy place and preparing as best I can for 2021.”