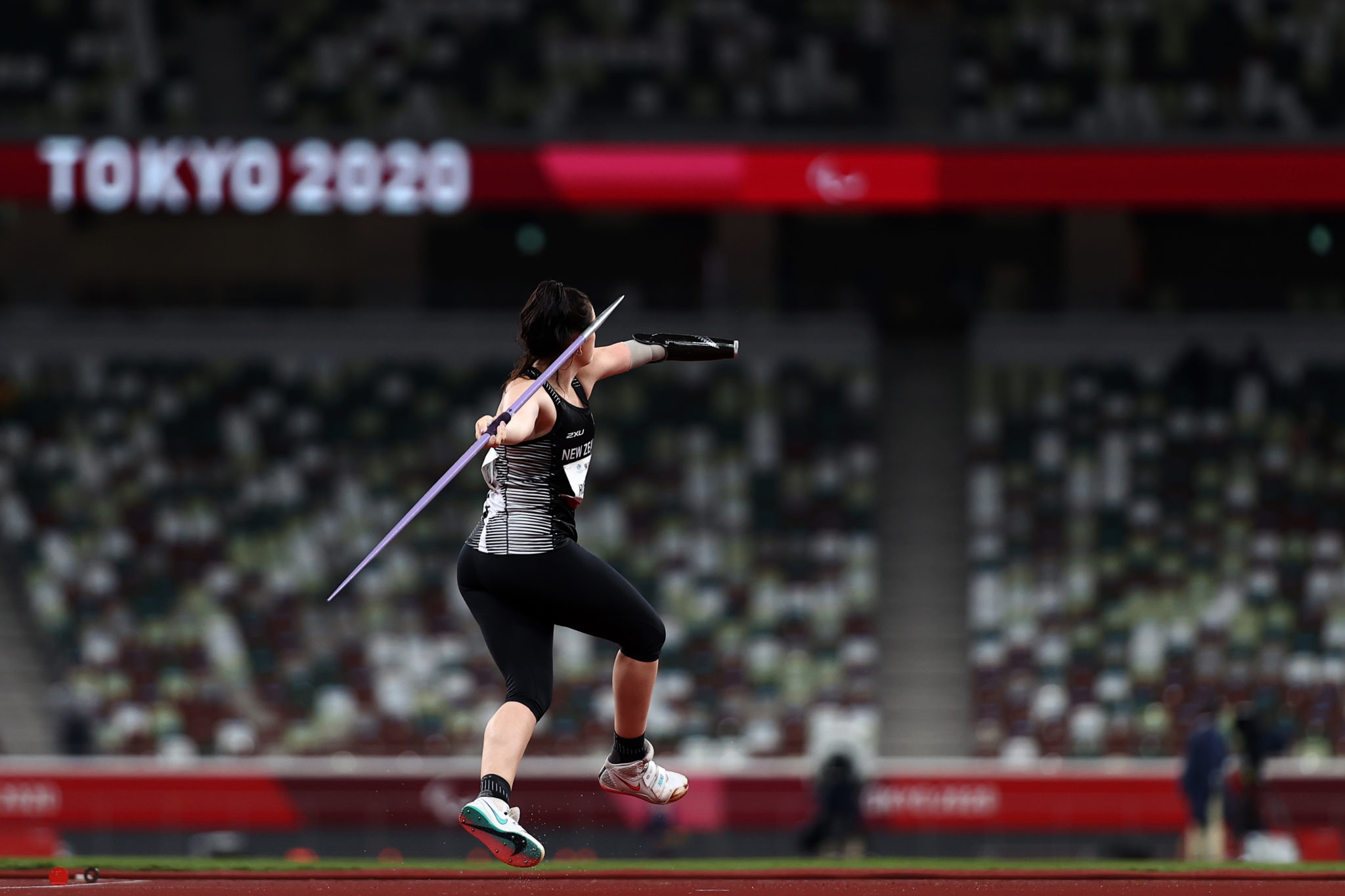 TOKYO, JAPAN - SEPTEMBER 03: Holly Robinson of Team New Zealand throws to win the gold medal as she competes in the Women's Javelin - F45 on day 10 of the Tokyo 2020 Paralympic Games at the Olympic Stadium on September 03, 2021 in Tokyo, Japan. (Photo by Dean Mouhtaropoulos/Getty Images for New Zealand Paralympic Committee) (Photo by Dean Mouhtaropoulos/Getty Images)

After a run of silver medals on the global stage, Holly Robinson is now a Paralympic gold medallist (Photo: Getty Images)

Holly Robinson claimed a thrilling gold medal with a dramatic final throw in the women’s javelin F46 at the Tokyo 2020 Paralympic Games.

With a mighty boom of the arm, the 26-year-old Dunedin-based thrower elevated herself from bronze to gold with a sixth round effort of 40.99m to earn the Kiwi her first senior global international title.

Holly has won a string of silver medals behind Great Britain’s Hollie Arnold at the Rio 2016 Paralympic Games, the 2017 and 2019 World Para Athletics Championships and 2018 Commonwealth Games, but today the proud New Zealander finally mounted the top step of the podium – a victory which was a rich reward for her determination and perseverance.

On another damp night inside the Tokyo Stadium, Holly opened with a 37.46m throw in round one to sit third behind Arnold, who launched the spear out to 39.05m, and Dutch athlete Noelle Roorda (37.71m).

In round two, the Athletics Taieri athlete improved to 38.68m but remained third overall as Roorda responded to the challenge by firing the javelin out to 38.99m.

The Kiwi, who was struggling to find her rhythm, registered a foul in round three and sought consultation with her long-time coach, Raylene Bates.

Hokitika-raised Holly improved her best of the competition by a further 7cm in round four with a 38.75m effort but slipped a little further off the gold medal pace after Arnold powered the spear out to 39.73m.

There was no change to the medal order in the penultimate round as Holly pinged the javelin out to 38.40m – although Roorda enhanced her overall distance with a hurl of 39.26m.

Running down the runway with greater intent, she connected well with the throw and the spear landed into the turf at 40.99m. Holly had leapfrogged into gold and understandably let out a roar of delight.

Roorda responded with her best of the night to move back into silver with a PB of 40.06m but Arnold could not improve with her final throw, guaranteeing an emotional gold for New Zealand.

Fighting back the tears Holly said: “Honestly, that last throw I couldn’t believe it. When I realised I’d won gold, which is something I’d wanted for so long, all the emotions came at me at once. I’m so happy and proud of myself and my team for helping get me here.

“So many times (in the past) I’d had a good throw in the final round and gone up to number one only for someone to beat me. I was just waiting for that last throw (of the competition) and once it was done, that was a moment I will never forget.”

On winning gold, she adds: “It means a lot. I’ve been fighting for it for so long. I don’t think the distance reflected where I was at or what I was capable of but I’m really proud of myself and managing to get that gold in the final round.”

The final New Zealand athlete in action at the Tokyo 2020 Paralympic Games is Lisa Adams, who lines up in the women’s discus F38 final at 10.35pm on Saturday. The Rotorua-based athlete secured gold in the women’s shot put F37 on day two of the athletics competition.