Training on a reserve directly in front of her house and at her home gym in the garage may sound like just another athlete related lockdown training story. Yet for New Zealand’s number one U20 female shot putter and discus thrower Tapenisa Havea that is just the way she likes to train both in and out of lockdown – a strategy that has proved a recipe for success for the Christchurch-based thrower. 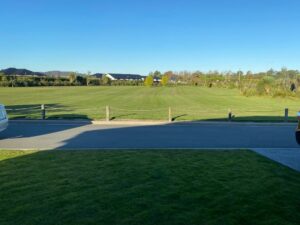 Winner of national senior shot and discus silver medals and having already achieved Athletics NZ Performance standards in both events for the World U20 Championships which takes place in Cali, Colombia in August, the future looks rosy for the latest athlete to emerge from the New Zealand throwing production line.

Coached by Timaru-based Adam Blake, the home training hub is a practical solution for Tap (Tapenisa) who often only meets each weekend with her coach.

“I live about 40 minutes from Nga Puna Wai and I like to be good with my time management,” explains Tap. “So, by training at home it makes it as quick and efficient as possible.

“At the reserve out the front of the house whenever I go training, I’ll just draw a circle and it is like boom, we can start training for shot put and discus.

“Our neighbours try and keep as far away as possible from me when I’m training there, although there is an area to the side full of plants which is where I’ve accidentally lost two discuses in the past,” she adds with a laugh. 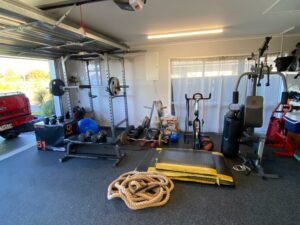 With the home gym already in place thanks to her father’s fondness for workouts her quirky approach appears to be working as personal bests of 15.97m for the shot and 53.40m for the discus attest.

Born and raised in Christchurch to Tongan parents, Tap’s sporting life began as an enthusiastic netball player before a friend of her father recommended she and her two younger siblings compete in athletics.

Taking up the advice and joining New Brighton Olympic AC, she quickly embraced the sport adding: “I initially fell in love with sprinting before taking up throwing, although in inter-club competition I was encouraged to try all events; sprinting, throwing, hurdles and long jump.”

Her naturally explosiveness, agility, power and speed lent themselves to a range of events and during her school years she excelled as not only a shot putter but also as a sprinter/hurdler.

In 2017 she finished fourth in the 100m at the New Zealand Secondary Schools Championships, a moment she looks back on with huge pride.

“That was definitely one of the highlights, it was insane to finish fourth and record such a fast time (12.49). I also won a silver medal in the U18 100m hurdles at the 2019 New Zealand Track & Field Championships – to run that fast among a group of amazing ladies was another highlight.”

However, having also been a regular national shot put medallist throughout her school years from 2020 she opted to fully focus on the throws.

“That was when my coach and I – along with my dad – decided we wanted to pursue throwing, I enjoyed the spinning and we also decided to focus more on the discus as well as the shot – it was fun.”

The New Zealand team for the World U20 Championships in Cali, Colombia (Aug 1-6) featuring Tapenisa was announced on Tuesday. To read more on the 12-strong team go here.