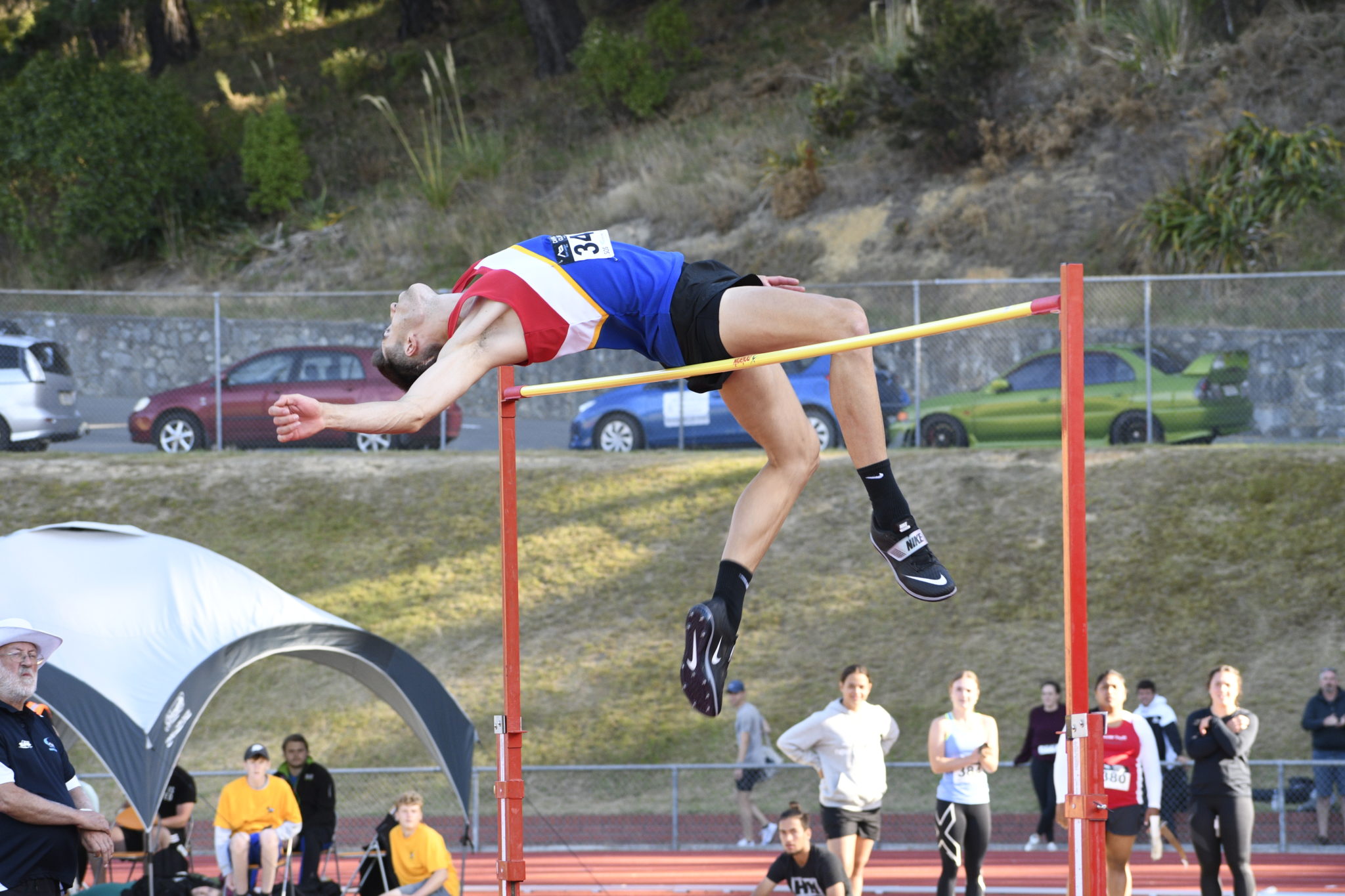 History was made at the Capital Classic in Wellington today as Hamish Kerr snared the outright New Zealand men’s high jump record courtesy of a stunning world-leading outdoor leap of 2.31m.

The 24-year-old Christchurch-based athlete has been knocking on the door of capturing the mark for himself – which he had jointly held with Glenn Howard at 2.30m – throughout a highly promising season.

At both the Night of 5s meet in Auckland in December and Cooks Classic in Whanganui last month, he produced some tantalisingly close attempts at New Zealand record marks and tonight the ice-cool high jumping ace delivered in style.

Kerr had earlier flirted with danger, requiring a third attempt to negotiate 2.27m – a height he has successfully cleared at both the aforementioned meets – before raising the bar to 2.31m.

Kerr came agonisingly close with his first attempt at the record-breaking mark and after missing out with his second effort he appeared to slightly readjust the length of his run up for his final attempt. It proved an inspired decision. With all eyes firmly fixed on the Auckland-raised athlete inside a sun-drenched Newtown Park, he dramatically delivered to wriggle clear of the horizontal bar and bank the outright mark.

The bar was then advanced to the automatic Olympic qualification mark of 2.33m and, although the height was beyond him tonight, he made three highly respectable attempts to suggest this mark is well within his range in the not-too-distant future.

An elated Kerr, who bettered his own outdoor world lead of 2.27m (four men have jumped higher in the world during the 2021 indoor season) said of claiming the national record outright: “It felt awesome. I’m so stoked to get a PB, it is the greatest feeling in the world.”

On his excellent attempts at the Olympic qualification marks he added: “I kept third attempting it at 2.27m and 2.31m and I was just so tired by the time I jumped 2.33m. I’ll probably change for strategy next time (in order to get the 2.33m height).

“Now I’ve got the national record I’ll start the competition at a higher height. I won’t muck about it and I’ll try to get up to it (the 2.33m height) earlier.”

Kerr, one of the hottest properties in New Zealand athletics, will next be in action this Saturday at the Sir Graeme Douglas International in Auckland.

Also impressing in the field was ultra-consistent hammer ace Lauren Bruce, who extended her streak to nine successive hammer competitions beyond the 70m distance with another quality display.

The Oceania record-holder has made a habit more recently of producing her best late in the competition and once again found her rhythm in round six with her 71.66m dislodging Julia Ratcliffe as meet record-holder.

Connor Bell gave another healthy reminder of his current outstanding shape by three times hurling the 2kg discus beyond 60m.

Competing in chillier conditions at the back end of the meet, the 19-year-old Aucklander once again performed with sheer class to dominate the men’s discus with his best of the night (62.52m) coming with his penultimate effort.

National champion Alexander Parkinson tossed the discus out to a respectable 58.03m for second.

In the women’s pole vault, Olivia McTaggart and Imogen Ayris both surpassed the meet record by 1cm as the former edged victory on countback with a best of 4.31m. The 21-year-old McTaggart has been in outstanding form this year, setting a 4.55m PB in Auckland earlier this month and, although she fouled out at 4.41m, claimed another confidence-boosting win.

Minus his good friend and rival Tiaan Whelpton, who opted not to compete today in the men’s 100m, Eddie Osei-Nketia claimed a comfortable win in 10.69 (+0.9m/s).

Last weekend in Hamilton, Osei-Nketia had blasted to an scintillating 100m win from Whelpton in a super-slick 10.28 but today the 19-year-old national champion could not quite match that performance.

A 55-second final lap helped Julian Oakley exact revenge on Hamish Carson following his defeat at the hands of the six-time national 1500m champion in Christchurch two weeks ago, to take out top spot in a highly competitive metric mile.

Oakley tracked the pacemaker for the first 1000m before hitting the front with Carson in his slipstream. Entering the home straight Carson loomed on the shoulder of the 2020 national 1500m silver medallist but Oakley responded to extend his advantage in the final 50m to stop the clock in a season’s best of 3:41.96.

Carson, who last weekend dipped below 14 minutes for the first time over the 5000m, recorded 3:42.40 for second with Liam Lamb rewarded for an aggressive run with a near four-and-a-half second PB in 3:50.00. Rising 17-year-old star James Harding further served notice of his ability with a near six-and-a-half second improvement, recording 3:52.74 for fifth.

Camryn Smart maintained her unbeaten record this season in the women’s 400m with a rock solid victory in 55.66.

The 19-year-old North Harbour Bays athlete ran an aggressive first half of the race to build up a sizeable lead on the field. Jordyn Blake challenged down the home straight but Smart held on to take victory by a 0.70 margin.

In the men’s 400m, Hamish Gill backed up his stunning one-lap debut victory at the Porritt Classic last week to claim top spot in windy conditions at Newtown Park.

Last week Gill, the 2020 national 100m silver medallist, rocketed to the top of the New Zealand rankings with a 47.72 clocking and, while not quite able to match that time today, he still posted a respectable 48.92 to finish comfortably clear of Rowan Blaikie (50.21) in second.

Amy Robertson maintained her domestic dominance this season in the women’s 100m hurdles to claim victory in a personal best of 13.58 (+1.5m/s). The 21-year-old chipped 0.02 from her PB with seven-time national champion Fiona Morrison posting a season’s best 13.96 in second. Gifted 18-year-old athlete Hinewai Knowles (Cambridge) offered further evidence of her exciting talent by equalling her PB in 14.11.

Camp stormed to the front and hit the bell with Rebekah Greene in her slipstream a clear 10m ahead of the remainder of the field. But, as Greene’s challenge started to fade in the final 150m and Camp started to badly fatigue in the final 50m, Atkinson produced a blistering late burst of speed to almost surpass the long-time leader.

In the women’s 100m, Natasha Eady overhauled Briana Stephenson courtesy of a powerful second half of the race to stop the clock in 11.87 (+2.3m/s). Stephenson made the slicker start but Eady proved too strong to clinch victory by 0.09 from her North Harbour Bays team-mate, maintaining her excellent run of form throughout an impressive summer campaign.

Lilli Szabo lit up the women’s long jump to run out an impressive winner courtesy of a 5.98m (2.4m/s) leap in round two. The Hutt Valley athlete’s best effort was beyond the allowable limit to be validated as a PB (which still stands at 5.77m set at Hamilton last week) but it was nonetheless a hugely impressive performance from the 21-year-old who finished 11cm clear of Briana Stephenson, who secured a second runner-up spot of the day.

Red-hot Paralympic champion Anna Grimaldi, who has set two national T47 records this season, once again impressed, soaring out to a best of 5.71m (-0.5m/s) for fourth.

Keeley O’Hagan edged a competitive women’s high jump with a season’s best of 1.80m on countback from teenager Josie Taylor.

Elsewhere, New Zealand champion Anthony Nobilo notched a season’s best of 63.42m on his way to top spot in the men’s hammer.

All meet record holders were eligible for a share of the bonus meet prize pool of $4,000. This included Julian Oakley in the men’s 1500m as, even though the race had never been contested previously at the meet, Capital Classic organiser Tony Rogers set a record standard of 3:43.05.