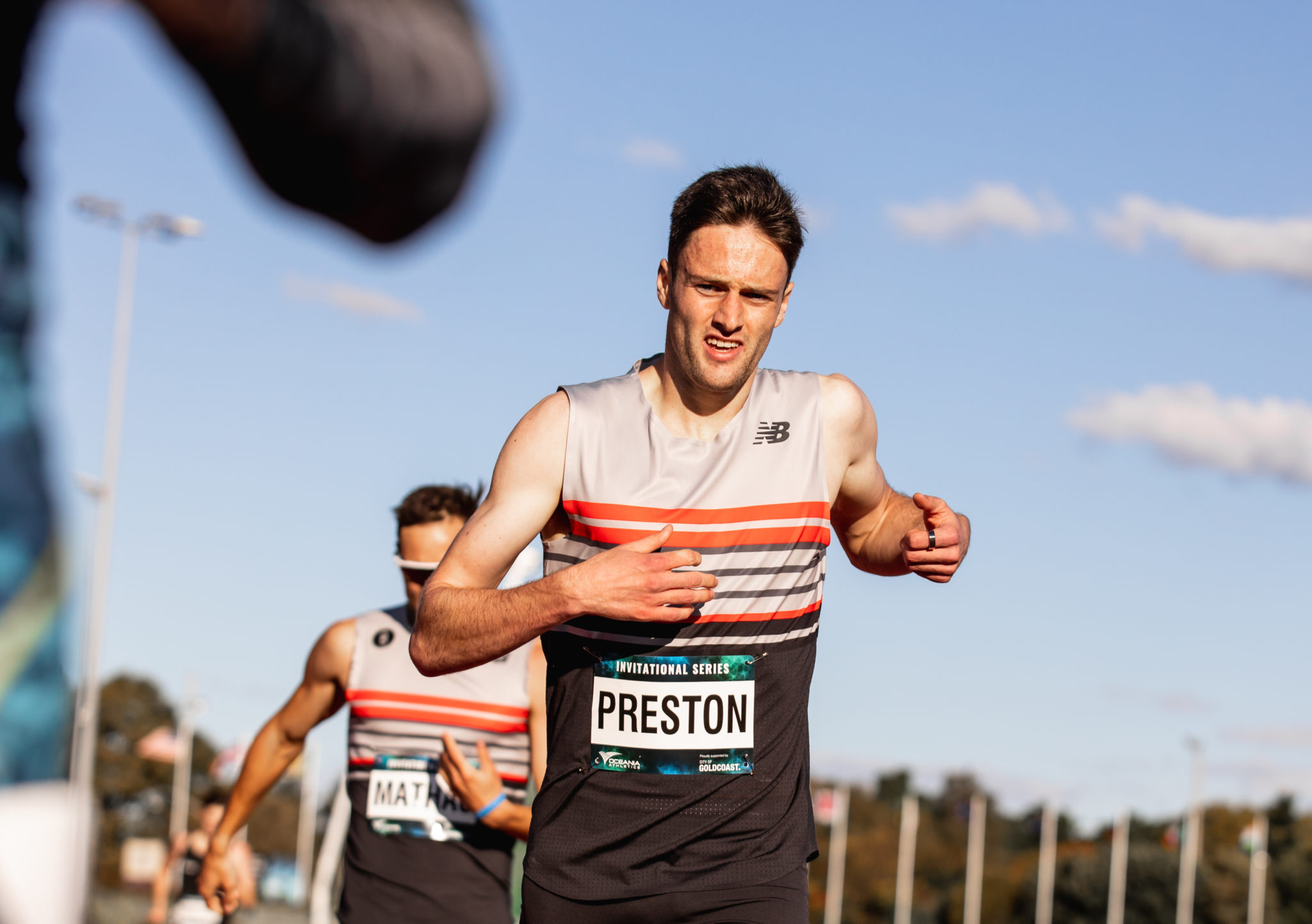 James Preston has enjoyed the most successful year of his career and joined an exclusive club in New Zealand as a sub-1:47 800m athlete. Steve Landells chats to the 24-year-old 800m specialist to chart his rising fortunes.

In the rollercoaster career of James Preston, the two-lap specialist certainly hit the jackpot in 2021.

However, it is his more recent performances on the Gold Coast which have perhaps most caught the eye – highlighted by a personal best of 1:46.52.

The performance suggests exciting times await the 24-year-old, who has required great patience throughout a stop-start career.

A relatively late starter to the sport, James first emerged as an athlete of rich potential in 2015 when landing the New Zealand Secondary Schools 800m title in Timaru. The following year he made another giant stride by qualifying for the World U20 Championships in Bydgoszcz, Poland, setting a national U20 record of 1:48.06 when exiting the semi-finals.

However, the following year he picked up a stress fracture of the foot which ruled him out for the season, and he was forced to embarked on a long recovery process.

“It was a bit of a wake-up call,” he admits of the injury. “I always wanted to be a hockey player or a cyclist and I didn’t quite understand about pre-hab and rehab in running. I was thrashing my body at that time, so it (the injury) was probably going to happen sooner or later.”

He faced 12 weeks of no running but re-emerged in 2018 in good form. He ran PB’s for 400m and 1500m, bagged 800m silver behind Brad Mathas at the national championships before later in the year heading north to base himself in Belgium for six weeks.

In what was his first racing block in Europe, he enjoyed some good times, setting a PB of 1:47.76 in Brussels but overall, the trip proved a big learning experience.

“I sometimes felt a little hard done by,” he explains. “I was often put in a B or C race when I probably deserved to be in a better-quality race, but what the trip taught me was it is important to capitalise on all the opportunities you get.

Under the coaching of Evan Cooper and after enjoying a good block of training, he emerged into the 2019 domestic season in good shape and with high expectations.

In his second 800m race of the campaign, he posted a PB of 1:47.61 in Wanganui and won silver at nationals behind Brad Mathas – who claimed his eighth national title – and performed solidly in his Australian outings.

Describing the campaign as “positive”, the Wellington Scottish athlete also ran a qualification mark for the World University Games in Naples later that year.

Ending his summer campaign of 2018-19 in April in Sydney, James admitted the relatively late finish did not give him a huge amount of time to reach full fitness for his World University Games quest in July.

However, adopting a policy of racing himself back into shape he successfully negotiated the hurdle of heats and semi-finals at the World University Games – finishing sixth in the final in 1:50.11.

“Looking at previous year’s results, I knew I was capable of making the final,” he adds. “I remember feeling horrible in the heats, but I felt better through each round. It wasn’t my greatest display of running in the final, but it was a positive step in the right direction.”

He stayed on in Europe for several more weeks and climaxed his season in style by clocking a sizeable lifetime best of 1:47.04 for fifth in Ninove, Belgium.

“It was good to get a half-a-second PB, but it was a wee bit frustrating I couldn’t get under 1:47,” he recalls.

While 2019 had been a largely memorable experience, the Victoria University of Wellington Building Science student suffered a blow towards the end of the year after he was diagnosed with a fracture of the sacral in his lower back.

Following his foot fracture in 2017, James had worked hard on ensuring he was getting adequate rest, the right diet and putting measures in place to avoid such a scenario. So, he described the diagnosis as “a shock.”

“We went through the investigations to try and see what it was, and we couldn’t find it was one conclusive thing,” he explains. “I took more of a holistic view and took ten weeks off running. I did a lot of cross training, cycling and swimming – even though I can’t stand swimming!”

His rehab continued via regular Skype sessions during lockdown, and he emerged for winter training last year in good shape – where he and his coach Evan adopted a new approach to training.

Previously having clocked up an average of 100km a week – much of it around a 1km loop at Karori Park – they took the cautious decision to rein it back to an average of 70km to lighten the load on the body.

Meanwhile, with the help of his girlfriend Lucy Jacobs, a physiologist with HPSNZ and herself a handy 2:08 800m runner, he has adopted a thorough load monitoring plan.

“Not only did we make sure the mileage was decreased but we adopted a lot of other health metrics to make sure the body was responding well to training,” he adds. “I have a wearable device fitted which measures heart rate variability, sleep patterns etc.”

For James, there was also an additional benefit to carrying out a detailed load monitoring plan. Back in 2016 while out on a run he collapsed. It was later discovered he had endured an epileptic seizure.

James has thankfully had no more episodes and adds: “I’m medicated for the epilepsy and I’m fortunate that I’ve only had to deal with one seizure. But I have to be careful to make sure I don’t over-do things, for example have too many late nights or push myself too hard in training. I have to keep a close eye on how I feel.”

With his major New Zealand rival Brad Mathas based in Australia, James found he was the main man during the 2021 domestic campaign. Not a natural front-runner as the fastest athlete in the field, he nonetheless all too often found himself out front which was a far from comfortable situation.

Despite this, he still boasted a four-wins-from-four record for the 800m – highlighted by his maiden national senior title in Hastings, courtesy of a 1:48.49 clocking.

“Unfortunately, Brad was in Australia because I would have loved to have beaten him to the title, but to win my first senior national gold was still super satisfying,” he adds. “To consistently run 1:47 and 1:48 throughout the summer off different paced races was also pleasing.”

Weighing up his options to compete in the US or Europe, he instead opted to head to the Gold Coast in June after hearing Australia’s 1:44 athlete Peter Bol and Brad Mathas were competing at the two Oceania Invitationals – which had the benefit of being area permit meets. It proved a wise decision.

In the first Oceania Invitational meet on June 5, James ran well to place second in a season’s best 1:47.50, finishing 0.23 ahead of Mathas in a race where Bol ran a blistering Olympic entry standard time of 1:44.88.

“It was a positive because it was not only a season’s best, but it was also good to run that fast first time out,” he added.

One week later at the second Oceania Invitational, James produced the race of his life. Through 600m in around 1:18 – the fastest split for the three-quarter distance in his career – he knew he was destined for something special. Again finishing second behind Bol after catching a fading Mathas in the final stages, he destroyed his previous personal best by more than half-a-second for a breakthrough 1:46.52 –becoming the tenth Kiwi in history to record a sub-1:47 clocking.

“A PB was not a surprise because I was in better shape than in 2019 when I set my old PB,” he explains. “I left it all the table and I’m happy with the performance.”

The Wellingtonian considered racing overseas in North America or Europe but given that the MIQ places were sold out quickly in August, he decided to call time on his season and he does not intend to compete again until the next New Zealand track and field season.

However, with the twin ambition of a World Championships and Commonwealth Games to target in 2022, the 800m specialist is not short of goals in the not-so-distant future.

“The aim is to put myself in the best possible spot to qualify for these championships,” he explains.

“The key focus is to break my PB which I certainly think I’m capable of. I ran the 1:46.5 off a relatively limited build-up of ten weeks since nationals, but with a longer build up and more racing opportunities, I think I can run low 1:46 or even 1:45 – which puts me in a good spot to qualify.”

With Mathas, the 2018 Commonwealth Games fifth-place finisher, setting a PB of 1:46.01 earlier this year and the form of rising 17-year-old James Harding catching the eye – he recorded a two lap PB of 1:48.95 this year – the quality of New Zealand men’s 800m running is on the rise.

So, how does James assess the rising depth of the event?

“It would be really cool to see a year when myself or Brad wouldn’t have to head overseas to get qualifiers,” he says. “For me that would be hugely exciting.”