Love for running drives on Macdermid after injury woes 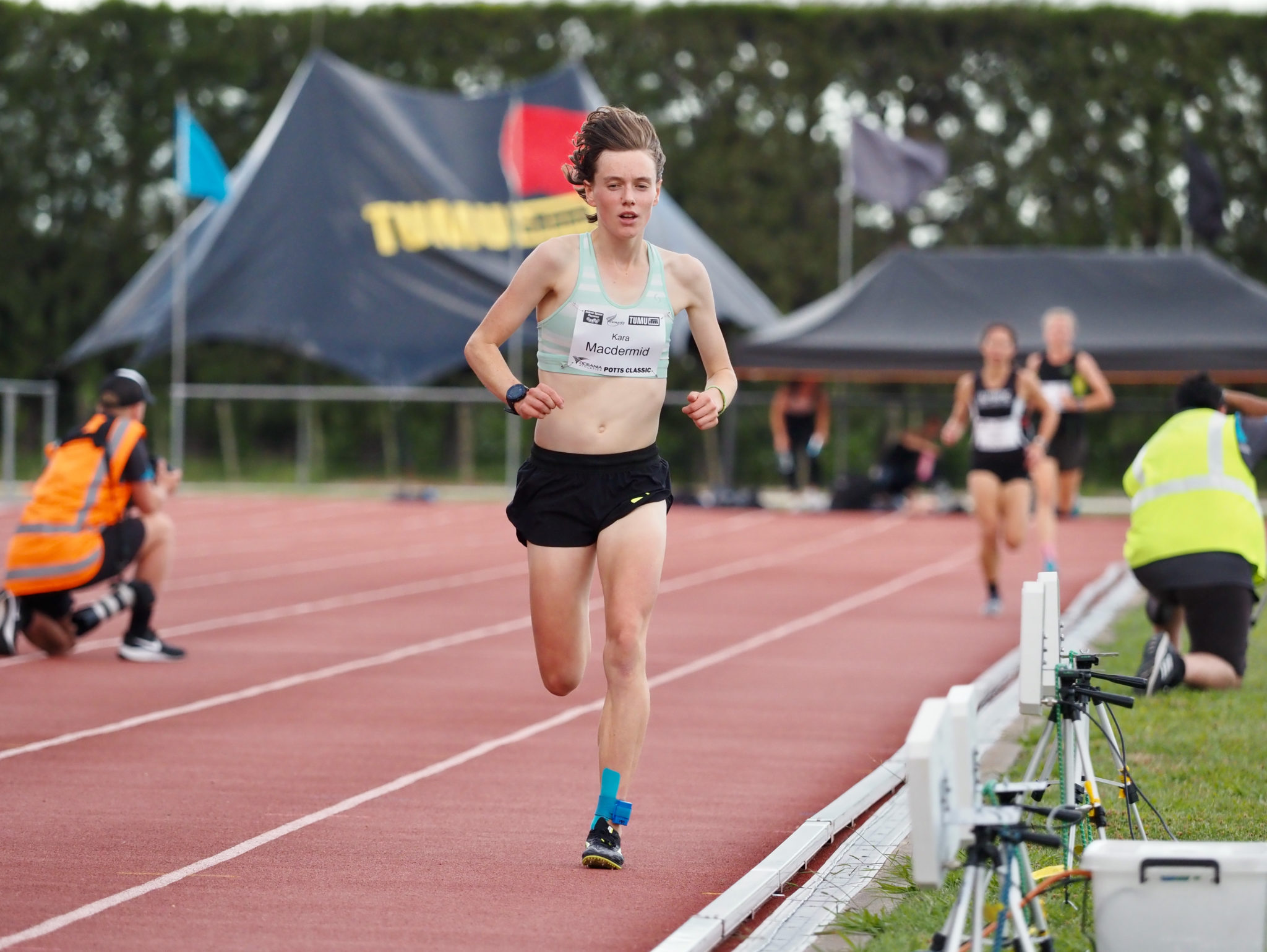 One of the most successful New Zealand athletes in the new year has so far been Kara Macdermid, who snared the national 3000m title and a silver medal as the one mile national championships returned. Steve Landells chatted to the 23-year-old Palmerston North-based athlete to chart her rollercoaster athletics journey.

When speaking to Kara Macdermid there is little doubting her deep passion for running.

A former teenage running prodigy, her progress was then halted abruptly by several years of injury turmoil.

Many lesser athletes would have thrown in the towel but her unadulterated love of running has helped navigate her through some lean years and, over the past couple, she has returned as a major force, capped by winning a first national senior title in Hastings last month.

“We started out running as a family, so I’ve always done it for the enjoyment as well as the competitive side,” Kara explains.

“I get a lot of positive emotions from running. If I’m stressed I know I have my run for 30 or 40 minutes when I can switch off at the end of the day. If I’m angry or upset I know running is something I can put a lot of emotions and feeling into.”

And this year that passion had paid back, big time.

At the Potts Classic, she claimed her first senior gold medal with a comprehensive win in the 3000m. She then backed this up the following weekend to add a silver medal to her collection in the revived New Zealand mile championship in Whanganui.

The middle-distance athlete can look forward with confidence to the remainder of the season, her primary target will be the 1500m at the Jennian Homes New Zealand Track and Field Championships next month in Hastings.

Born in England, Kara re-located to Palmerston North at the age of five with her sports-loving family.

Her mum, Fiona, competed as a cross country mountain biker her father, Paul, was a competitive white-water kayaker and she recalls enjoying an active childhood.

She is the eldest of three talented siblings with younger sister Zia currently on an athletics scholarship at the University of Wyoming and younger brother Noah a former U-20 3000m bronze medallist.

“As a whole family we used to go for runs together, it was fun,” she remembers.

Performing well at schools cross country events on a whim, she entered the 2008 New Zealand Cross Country Championships in Waikanae. She finished in midfield but was instantly hooked.

The next year she returned to place fourth at nationals and then in 2010, at the age of nearly 13, she claimed victory at the New Zealand U-14 Cross Country Championships in Waikanae to snare her first national title.

“I loved running the races and as I continued to run well it became addictive,” she says.

Coached by her father, Kara quickly developed into a running superstar during her school years as a Awatapu College student.

Aged just 14, in 2012 she secured both the New Zealand U-18 and U-20 3000m titles. The following year, she opted to capitalise on her red-hot form by targeted the U-20 race at the World Cross Country Championships and later that year an assault on the 3000m at the World U-18 Championships in Ukraine.

Injury denied her the chance to compete at the former event, but she returned to win selection for the New Zealand team in the latter, where finishing 13th in the 3000m final in Donetsk, Ukraine.

“It was incredible to be there competing in that environment,” she says of her first global competition. “Hopefully, in the future I’ll get to feel that experience again.”

Qualifying to compete at the World U-20 Championships, she opted to turn down the chance to compete for her country in Eugene, Oregon, preferring instead to experience a two-month European tour of competition.

“I made the decision to go to Europe just because of the extra experience I would gain running a quantity of races rather than just one (at World U-20s),” she explains. “Looking back, it was an amazing year, although since then I’ve had some struggles to return to that level.”

The genesis of three years of injury woes can be traced back to the 2016 national 5000m final in Dunedin after she ruptured her plantar fascia with 400m remaining.

Leading at the time, adrenaline took her through to the finish and the New Zealand U-20 title but, following the injury, she spent six months on the sidelines on the long journey to full rehabilitation.

More injuries followed throughout 2017 and 2018 as she spent differing periods of time out from running with ankle, quad and Achilles issues.

Describing that period in her career as ‘gutting’, she says her family and friends acted as a huge support but, ultimately, it was her love for running which helped nurse her through these challenging times.

“I was completing the training, getting into good shape and then getting injured,” she explains. “It was mentally battering. To have that happen three years in a row was hard but I knew I loved the sport and I knew deep down if I could avoid injury, I would be fine.”

Her patience was rewarded in 2019 when, finally rid of the injuries which had plagued her career for so long, she returned to regular competition.

During the domestic track and field campaign, she set an 800m PB of 2:10.36, ran a 1500m season’s best of 4:20.58 (her fastest time in the distance for five years) and finished seventh over the metric mile at the New Zealand Championships in Christchurch.

“I was getting some really good races and started to feel good running again. It was such a good feeling,” she says.

Using the cross country season later that year to build her strength endurance, she won a silver medal at the New Zealand Cross Country Championships in Wellington and ended a good year by completing her Bachelor of Science degree in zoology and ecology at Massey University.

Running around 100km per week in the winter and 70km during the summer, she continued to progress in 2020 under the guidance of her father.

In her first 1500m competition of the year at the Porritt Classic, she recorded a season’s best performance of 4:19.76 for fifth, despite a far-from-perfect preparation.

“Driving up to the meet the day before, my neck and back had seized up. I was lucky that we had a physio staying with us from England at that time who treated me and I only made the decision to run an hour or two before the race,” she says.

“Because I’d been feeling pretty crap, I’d taken the pressure off myself. I ran with zero expectation but I think, because I was so relaxed, I ran really well.”

Later in the season, she claimed a 1500m silver medal behind Angie Petty at the New Zealand Championships in Christchurch – a race which holds special memories for the Palmerston North Athletics and Harrier Club athlete.

“This is the favourite race of my career,” she recalls. “This is the one I’m most proud of because of all the years of work that had gone behind it. I was really grateful that Becky Greene had pushed the pace on lap three, because I don’t have the pace of some of the other girls. Then, on the last lap, I just hung on as best I could.

“I was over the moon to win silver. But regardless of winning silver, I was just really happy with how I ran the race. The fact it was nationals just made it really cool.”

Following lockdown, which coincided with the end of the season, Kara endured what she describes as ‘a shocker’ of a run to finish third at the New Zealand Cross Country Challenge in Dunedin.

Yet the part-time field ecologist, who works for a company in which her direct report is coincidentally six-time New Zealand 1500m champion and Rio Olympian Hamish Carson, quickly dusted herself down in preparation for the 2020-21 track season.

Running on the bridal paths and trails around Palmerston North, she regular trains with brother Noah and, naturally given that she is part of one of New Zealand’s leading running families, athletics is often the main topic for discussion around the dinner table at home.

“We talk running a lot and when the big races are on we follow them on TV,” she says. “I really enjoy racing people such as Angie Petty and Nikki Hamblin and they are such lovely people as well. Overseas, Laura Muir (European 1500m champion) is one of my favourite runners. She always tries her hardest in every race and is really inspiring to watch.”

Always planning to target the New Zealand 3000m Championships in Hastings, she claimed a comfortable win in 9:44.27.

It was a memorable moment for Kara, not only to snare her maiden senior national title but also to play a key part in the history of her club, Palmerston North Athletics and Harrier Club.

“I didn’t realise but it was only after the race I heard that it was only the third senior national women’s title won by that club. That was a nice moment.”

Delighted to be given the chance to run in the revived New Zealand mile championships in Whanganui, she performed with pride to win silver in 4:41.44 behind Camille Buscomb – and add a second national medal in seven days.

“It was pretty cool to have the event at Whanganui because it is my favourite track to race on. I like the surface, it is firm underneath and feels really nice. Then you have the history which goes with the track, the Peter Snell factor and the bronze statue,” she says.

“I was happy with how I ran. I was prouder of my mile performance than the 3000m the week before. Up against Camille, Katherine Camp and Susannah Lynch, it was good, competitive racing, which is why I love 1500m and the mile.”

Targeting regular racing every week between now and nationals, the ultimate goal is the 1500m at the New Zealand Track and Field Championships in Hastings.

Once there, she says she is looking to execute the best possible race she can and, beyond this season, harbours international ambitions.

“I want to keep improving but continuing to enjoy running. In the future, I would love to compete against world-class athletes at World Championships, Commonwealth Games and Olympics. Hopefully, my times will drop and once they do everything will come as a by-product from that,” she says.

“I think I show perseverance in whatever I do. I run because I love it and I believe it is that love that has kept me going.”