The Hits radio presenter Mike Puru has been attacked by a pack of dogs and endured a nasty spider bite in a far-from-straightforward preparation for the 2021 Rotorua Marathon, but nothing will stop him from fulfilling his goals on 8 May.

Mike, who will be tackling the half marathon alongside his co-hosts Anika Moa and Stacey Morrison, entered his first half marathon in Queenstown in 2019 and has since become a running addict.

Today a daily runner, the Auckland-based presenter says regular exercise has markedly improved his mental health and wellbeing, as well as leading to a 6kg loss in weight.

But earlier this month he suffered a pair of unpleasant blows in the preparations for his 21km test in Rotorua.

“I was up in coastal Kerikeri for Easter and, as I went for a run and went up a country road, out of the middle of nowhere I was attacked by a pack of five dogs,” he explains.

“They took a few nips out of me. Thankfully, I learned from when I was a kid to stay still if a dog attacked me and luckily they backed off. I had to go to the doctor and get a tetanus shot and I missed a couple of days running.”

Just days after returning to training, Mike suffered a second blow when a white-tailed spider dealt a nasty bite on his toe.

“It was worse than the dog bite and the next day my toe was swollen,” he says. “I was put on a course of antibiotics and I missed three days of running.” 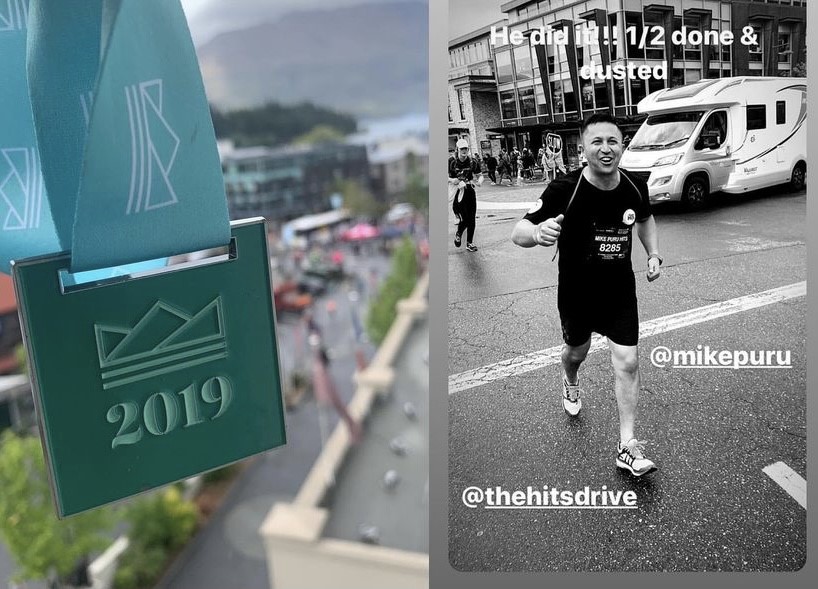 Mike Puru caught the running bug after completing his first half marathon two years ago.

Entering the 2019 Queenstown half marathon on a whim, the 45-year-old presenter so loved the experience he developed an almost overnight passion for the sport.

He now runs a 6-7km route every lunchtime in central Auckland.

“If I don’t go for a run every day, I feel a bit discombobulated, like I need to run to aid my brain,” he says.

“Mentally, it has given me so much more clarity. It is amazing what you think of and can plan in your head when you are running.

“I now feel I can have a guilt-free wine on an evening after I’ve gone for a run.”

Since taking up running, his co-hosts at The Hits have followed suit with Mike, Stacey and Anika all running last year’s Queenstown Marathon too.

Mike insists Anika in particular has been a huge inspiration, acting as the trigger for dozens of people to get off the couch and go out for a run.

“It has been incredible watching her journey,” he explains.

“She’s a busy mum, filming TV shows, presenting on radio and she still manages to get her run in every day. She’s looking very healthy and she tells me how good it is for her mentally.

“Anika has inspired so many people and when MP Kiri Allan was given her cancer diagnosis, Anika started her hashtag #lezrunforkiri to show support.”

It was Stacey, however, that acted as the spur for the team to tackle the Red Stag Timber half marathon in Rotorua, which takes place on the stunning trails of the Whakarewarewa Forest.

She has family based in the area and Mike believes the weekend will be a blast.

“Rotorua is always such a cool place to visit, we can drive down on the Friday, run the race on the Saturday and have the rest of the weekend free to do what we want,” he says.

“We loved the Queenstown experience, it is good for team bonding, it will be nice to support each other and have a few beers.”

Mike ran a time of 2:25 at the 2020 Queenstown Marathon but is quietly hopeful he can run a sub-two-hour time in Rotorua next month.

He would encourage anyone to enter the Rotorua Marathon, regardless of ability or experience.

“You don’t need to be the fastest runner in the world, you just need to run to that finish line,” he says.

“To cross that finish is an incredible feeling. It triggers a sense of self-belief that you can take on any challenge.”

Why not join Mike and take on the challenge of the Rotorua Marathon on 8 May?