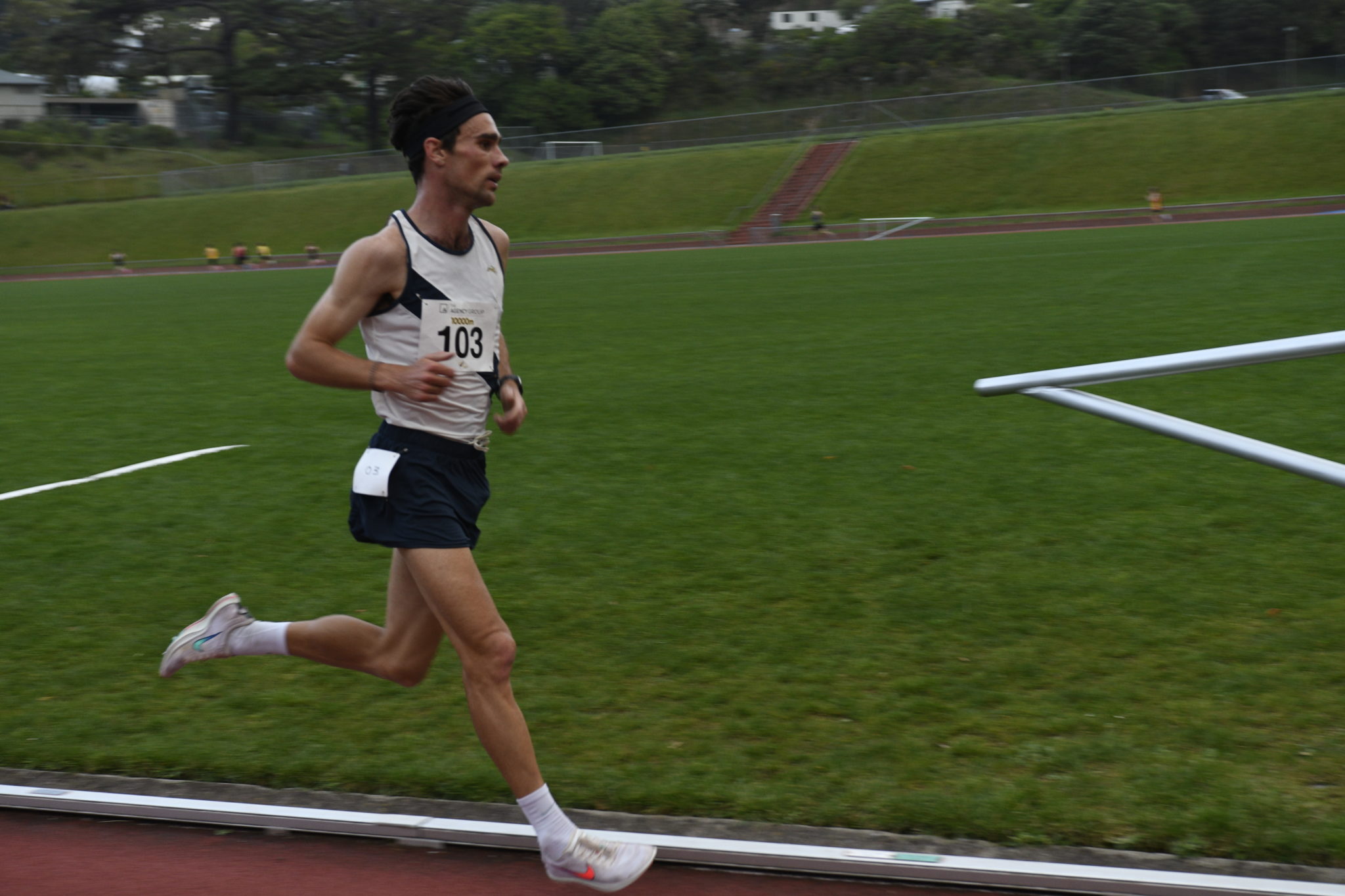 Julian Oakley gave an exemplary demonstration of his versatility by securing victory at the Athletics New Zealand 10,000m Challenge at a blustery and overcast Newtown Stadium.

Meanwhile, in the senior women’s race, the sister act combination of Deborah and Susannah Lynch secured a family one-two for the Olympic Harrier club.

Oakley, the national 1500m champion, was making his debut appearance over the 25-lap distance and he proved a class apart to take the title by a victory margin of nearly a minute in 29:39.73.

Metronomically paced by Oli Chignell for the first 7km, Oakley (Athletics Tauranga) was happy to shelter behind the New Zealand Cross Country champion before cantering home to a comprehensive victory.

Chignell, who won this meet last year in a blistering 28:48.03, acted as a selfless pacemaker today and but for several laps when Christopher Dryden led in the early stages the diminutive Otago athlete was at the head of affairs for the first 7km.

Around 4km the lead group quickly splintered leaving Chignell out front followed by Oakley with an increasingly large gap opening behind. The 5km split was hit in 15:00 from which point the pace appeared to quicken. Once Chignell stepped to the side it was Oakley, the 2018 World Indoor 3000m finalist, in splendid isolation at the front. Accelerating over the final 1km he made an emphatic statement on his 10,000m debut.

“It was what I expected,” he explains. “I was hoping to go under 29:45 and maybe if the conditions were nicer night low 29s.

“I was relaxed for 5km behind Oli before there was a definite injection of pace and we really got the ball rolling just him and me.

“Leading into that wind for 7km was impressive and I definitely owe Oli a beer or two. It was my first race since June and I was just keen to go out there and win a gold medal. It was nice to bank that after enjoying some good training over the past two-and-a-half months.”

Deborah hunted down her sister, Susannah, the national 1500m and 3000m silver medallist, in the final 2km to edge the battle of the siblings in the senior women’s race. Former triathlete Deborah, who won at this meet last year, endured a far from perfect race but was satisfied to take the title in 37:28.94 from her sister, who recorded 38:06.07, on her 10,000m debut.

The bronze was awarded to Genevieve Coffey (Wellington Scottish) who ran 38:48:03 in the mixed B race.

Former national cross country champion Ruby Muir (Wellington Scottish) in a time of 35:20.68 followed by Esther George (36:46.10) were the first two women across the line. However, they were ineligible for challenge medals because their shoes did not comply with World Athletics rules.

Deborah who ran in the mixed A race said: “It is nice to win the title even thought my pacing was way worse than last year.

“I followed the 35-minute paced group for the first 2km until I got spat out the back. From then on it was a bit of a slog over the final 8km. Susannah opened a big gap on me – and I could see her on the other side of the track. I was just lucky to catch and pass her with 2km to go.

“Susannah rolled the dice a little bit she just probably needs a bit more experience over 10km. Give her another shot and she’ll definitely crush the distance.”

National U20 5000m and cross country champion Will Anthony maintained his outstanding 2021 by claiming the New Zealand U20 10,000m Challenge title. Clocking a swift 30:59.07 on his 25-lap debut his performance was good enough to claim fourth in the invitational race behind Oakley. Silver was bagged by national U20 3000m gold medallist Cameron Clark (Christchurch Avon) in 31:34.02 who placed eighth overall in the invitational race. Bronze was secured by Hayden Storrier (Victoria University), who ran 37:19.98 in the A race.

For full results go to the Track Meet app.