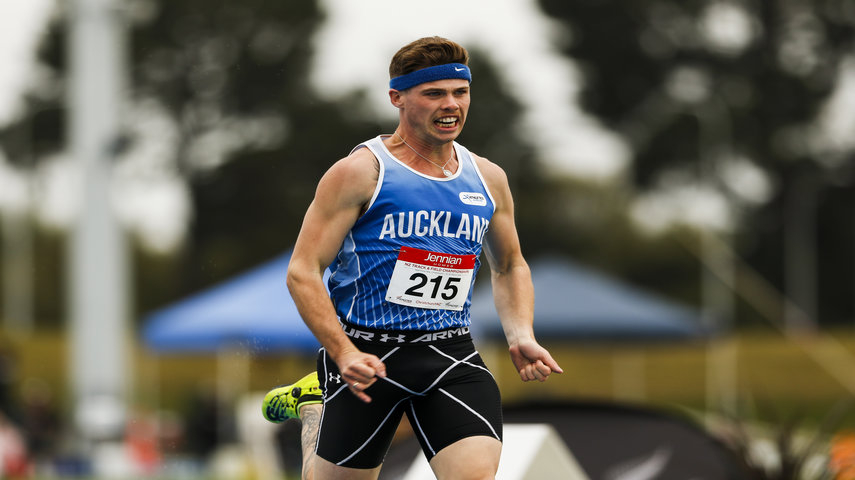 Para athlete Keegan Pitcher has shown tremendous resilience over the past few years after facing a number of challenging setbacks. Steve Landells speaks to the converted middle-distance runner who hopes to feature at the rescheduled 2020 Paralympics in Tokyo next year.

Since Keegan Pitcher made a spectacular entrance to international competition by winning T36 400m and 800m bronze at the 2017 World Para Athletics Championships in London – just 11 months after taking up the sport seriously – the Aucklander has had to face his fair share of challenges.

In 2018 he underwent a re-classification to the T38 division – a switch which was to change the entire route of his career. He later underwent a change of event from 400m to the 1500m and more recently has had to overcome the blow of a stress fracture of the foot.

But despite the setbacks, the 22-year-old remains unbowed and has firmly set his sights on an appearance at the rescheduled Paralympics in Tokyo next year.

Born with cerebral palsy, Keegan played both softball and football as a child yet it was only after completing the 200m and 400m double at the 2016 Junior Disability Games that his running career started in earnest.

Picked up by coach Hamish Meacheam, his progress came at a stunning rate of knots and in less than a year of full training he powered to T36 400m and 800m bronze – one place behind fellow Kiwi William Stedman in the latter event – at the 2017 World Para Athletics Championships.

Aged just 19 at the time, it was an unlikely achievement and one which Keegan still reflects on with a certain degree of bemusement.

“It is all still a bit of a blur,” he explains. “Everything that happened (in London) was still a shock to the system. I wasn’t expecting two bronze medals. It was an amazing experience. I learned a lot from that trip and it showed me what possibilities athletics could bring.”

Yet, as quickly as his hopes and aspirations soared, he was to suffer a major setback in early 2018. The International Paralympic Committee had proposed a review of the classification system which meant all cerebral palsy athletes faced a new set of testing criteria. Keegan headed over to Australia to undergo the testing and was re-classified from a T36 up to the T38 division because his form was “too symmetrical and too nice”. Suddenly part of a classification group with less severe disabilities and much faster runners, his world had turned on its head.

“I was devastated and I had a little cry,” he admits. “It was an emotional week, one of the most stressful and emotional weeks I’ve ever had. But once I came back home I had a de-brief with my coach and we tried to look on the positive side.”

He re-focused his efforts on the T38 400m but during the 2018-19 domestic campaign he hit upon a glass ceiling in the one-lap race.

Despite making positive inroads in training, this was not reflected in his performances when racing.

“I knew deep down I had to find three or four seconds in the 400m to be able to make world and Paralympic finals but I was struggling to make even a half-second improvement,” he recalls of this period.

Frustrated and with no T38 800m race on the programme, he opted to last year change his training to also focus on not only the 400m but the 1500m as well.

Having won T36 world 800m bronze medal in 2017, the switch to the 1500m was in some ways a return to his first love of middle-distance running.

Fully supported by coach Meacheam, he also fully appreciates the backing he has received from Athletics NZ.

“They have always been willing to support me, even though I’d gone from a world T36 bronze medallist to a T38 unknown,” he says.

Adjusting his training from three or four track sessions a week to just one track session and four longer runs, he found he quickly loved running the longer mileage.

And he arrived at the 2019 World Para Athletics Championships in Dubai – where he competed in both the 400m and 1500m – in good shape. Exiting the heats of the 400m in sixth in 56.74 was not what he had in mind but at least it crystallised his thinking about the one-lap event.

His performance in the 1500m offered great reassurance he had made the right choice. Hacking 17 seconds from his PB, he finished 13th in the final in 4:35.77 he said “he could not have done anymore” and from that point on he has been 100 per cent focused on the metric mile.

Competing at the New Zealand Track & Field Championships in Christchurch in March he ran a time of 4:41.44 Ostensibly running solo he was “stoked” to come within six seconds of his PB and was delighted with the even paced nature of the race.

However, within a week of this victory in the Garden City, Keegan faced his latest challenge when he was diagnosed with a stress fracture on the second metatarsal of the left foot.

Intending to run at the Australian Championships – which were soon to be cancelled because of the Covid-19 pandemic – the injury was initially a devastating blow for the West Aucklander.

“It was the first time since I started running that I was unable to do so,” explains Keegan, who admits the injury may have been caused by running longer reps in spikes as a remodelled middle-distance runner. “Even during the disappointment of the re-classification I was able to run.”

Yet as the full fall out of the pandemic and the lockdown started to bite, Keegan’s initial frustration at the injury turned into relief. With no competition taking place globally, the timing of the injury was not so bad. Meanwhile, the decision to reschedule the 2020 Paralympics 12 months to 2021 also worked in the Kiwi’s favour.

“I was glad they made that decision because it gives me another 12 months to get over the stress fracture and also more time to cut another 12 seconds from my PB (chasing the Paralympic qualification mark of 4:23:00).”

From the outside, an improvement of 12 seconds may seem an ambitious goal. However, given his basic speed as a 56-second 400m performer and his huge scope to enhance his endurance, Keegan, who last month graduated from college as a PE and health teacher, is optimistic there is a lot more to come.

“I’ve only really been training as a 1500m runner for a year, so I don’t have the endurance of athletes that have been training for five, six or seven years. The biggest gain I can make is on the endurance side. I already have the speed, I just need to combine it with that strength and endurance.”

Keegan has been back running a month and is sensibly running just three days a week, with two bike sessions per week, a water-based running session and a yoga/stretching workout.

In the longer-term, given the toll of running on his body he might retain the bike and water-based sessions but for now he is looking ahead positively to the future.

“It has been very challenging,” he says of the past few years. “But I keep reminding myself to focus on the good times. These things are there to test us. There have been times when I’ve thought about throwing in the towel but I just have to push through it. Running has definitely been the most challenging thing I’ve ever done, but I still do it because I love running.”