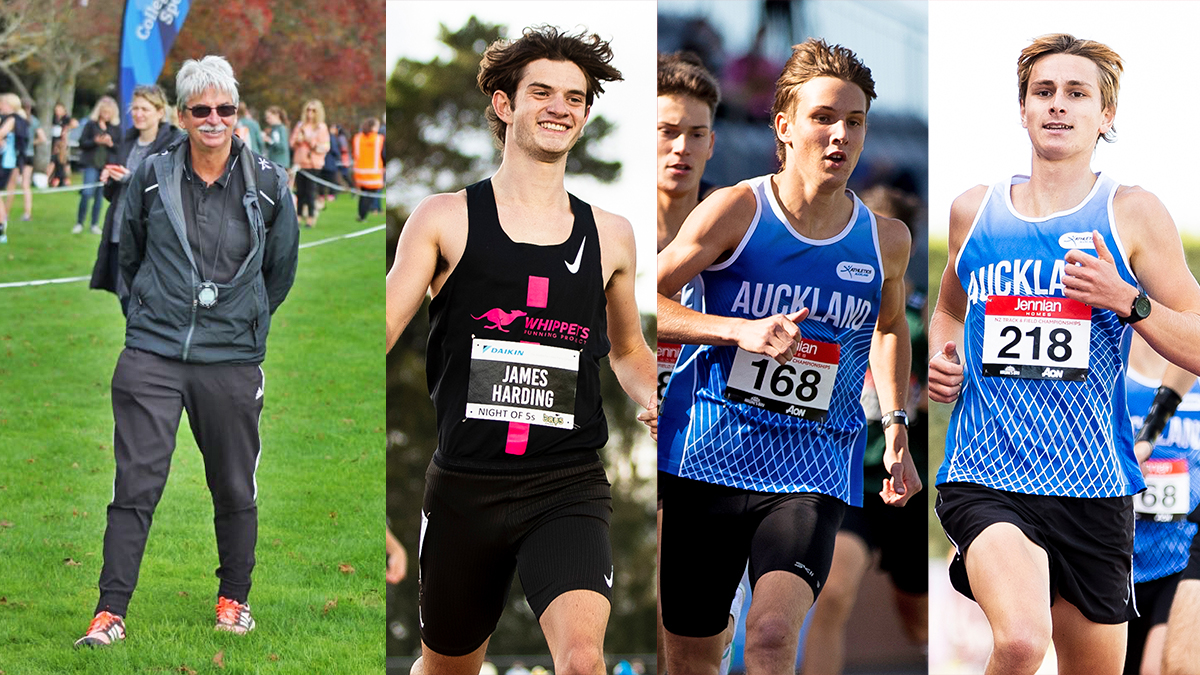 Perry Cunningham is the proud coach of three athletes attending the World U20 Championships in Cali, Colombia in August. Steve Landells charts his lengthy coaching journey which spans a total of six decades.

One of the more noteworthy trends of the 12-strong New Zealand team for the 2022 World U20 Championships has been that seven of the squad compete in endurance events from 800m to 3000m.

This wave of young, fresh talent into the sport is very exciting, especially so for one septuagenarian coach who has successfully guided two of the squad members to Cali and recently taken on a third (Luke Hitchcock who has been selected for the 800m) in the lead up to the event which takes place in Cali, Colombia in August.

Perry Cunningham, the avuncular former head of PE at Kings College and coach to James Harding and Zane Powell, is delighted at the efforts of his group of athletes which also includes the Browne twins – Bella and Chloe.

South Aucklander Perry has an eclectic athletics background. Describing himself as “a bit an anomaly” in his younger days he combined cross country running with high jumping. On the running side he was coached by former British Olympic 5000m silver medallist Gordon Pirie, and training in the same group which included future star New Zealand athletes Anne Audain and Allison Roe. Perry later would be transformed into a sub-2:30 marathon runner.

However, the high jumping was more of a mystery. Standing at just 5ft 9ins he was short for a high jumper, but possessing “springy and bouncy legs” he was good enough to win the 1967 men’s national senior high jump title at the age of 19 until a knee injured brought a premature end to his life as a field event high jump athlete.

His coaching career began as a newbie teacher at Rosehill College 50 years ago. As a teacher he was expected to take on an extra activity so opted for athletics and he achieved quick success as a coach guiding two boys he coached to third and fourth in the 1500m at the inaugural New Zealand Secondary Schools Track & Field Championships in Christchurch in 1973.

“At that stage I was still running but the coaching seemed a natural progression,” he explains. “From the beginning I really enjoyed it, and when I think I started 50 years ago it has been quite a journey. If only I knew then what I know now I probably would have been a hell of a lot better at coaching. But you learn as you go, and you never stop learning.”

Perry has also been fortunate to have learned from many coaching mentors over the past five decades including the legendary Arthur Lydiard – whom he first met in the mid-1990s. Lydiard was attending a seminar at Kings College and after recognising Perry as part of the athletics community, the former coach to Sir Murray Halberg and Sir Peter Snell promptly invited himself to an athletics camp organised by Perry.

With the benefit of Arthur’s input and growing experience, Perry enjoyed more success as a coach. Over the years he has guided dozens of athletes among them New Zealand women’s 5000m, 10,000m, half-marathon and marathon record-holder Kim Smith, guiding her through her formative years.

However, Perry, 73, admits it was only after he retired full-time as a Director of Sport at Kings College in 2013 has he had the time to flourish as a coach.

“Since I retired I’ve never done as much reading and research as a coach. This has allowed me make many tweaks and changes as a coach and this allowed my athletes to run faster. My personal education as a coach is now a long way ahead of where it used to be.

“I think now I understand the balance in training and that sometimes less in more. Getting the training intensities right for quality work is really important. I spoke to Dick Quax a few years ago at a cross country meet before he died. I said I’m starting to get my intensities right using the Jack Daniels’ VDOT approach. When I mentioned that to Dick he replied ‘It has taken you long enough, but the penny has finally dropped’. That gave me further belief that I was on the right track.”

Perry has also been fortunate to tap into other mentors with Arch Jelley, former coach to former Olympic 1500m Sir John Walker, a key support.

Perry admits he get emails from Arch with information on interesting coaching articles. “He says here is an interesting article. He doesn’t tell you that you must read this, he just gently points you in the right direction.”

Other coaches he takes inspiration from include the influential British coaches such as Frank Horwill and Harry Wilson, former coach to 1980 Olympic 800m champion Steve Ovett. The ‘multi-paced running’ approach to training is something he implements with his highly successful current group, which includes Oceania U20 800m and 1500m champion James Harding and New Zealand U20 800m champion Zane Powell – both of whom are competing at the forthcoming World U20 Championships in Cali, Colombia in August.

Also part of the top quality group include the Browne twins – Bella and Chloe – who finished one-two in the 2022 New Zealand U20 women’s 3000m.

Almost five decades of coaching work spectacularly came together at the 2020 New Zealand Secondary Schools Championships when Perry enjoyed what he describes as the greatest moment of his career. At the Tauranga Domain, Perry’s group remarkably won six titles with Zane securing the senior boys 1500m and 3000m, James Harding winning the senior boys 800m and James Ford the junior boys 800m.

“The foundation of this success was the multi-paced running,” he insists. “Something like that only comes once in your coaching career and I am convinced when we cleaned up all those school races that was the difference.”

Since then his group have continued to impress with James Harding winning the men’s U20 800m and 1500m double at the recent Oceania Champs and James Ford securing the Oceania U18 800m title in Mackay.

So how would Perry encapsulate his coaching philosophy?

“I guess you would say I’m trying to use the best of the past but also trying to taper it so it is on a level which is better suited for the kids I’m coaching.

“But one of the best things about the group is that they can think independently. I’ve now coached them for five or six years that they are telling me if they are light on aerobic or VO2 Max work. James Harding came up to me recently and said “looking through my log I see we have missed out those (Steve) Ovett speed sessions”. I said to James, ‘well done, you’ve picked up something that I have overlooked’. I lay the foundations but I would like to think the athletes are also contributing to their programme.”

Perry accepts that a chapter of his coaching journey is about to come to a conclusion as James Harding, Zane and the Browne twins are all set to leave to take up US scholarships in August. Before then he’ll be watching intently how the former two fare in Colombia. However, as a new chapter closes another one opens and Perry has no intention of kicking the coaching bug.

“I’ve had such a good group of athletes it will be sad to see them go,” adds Perry. “It has been a great journey for all of us. But the fact they are ready to get on with their life in the US is also lovely and fantastic.

“I have some good younger kids such as James Ford and a couple of other boy who are showing great promise , Jack Erikson and Quinn Moss and I look forward to working with these athletes in future.”