Ratcliffe reflects on key moments on road to Olympics 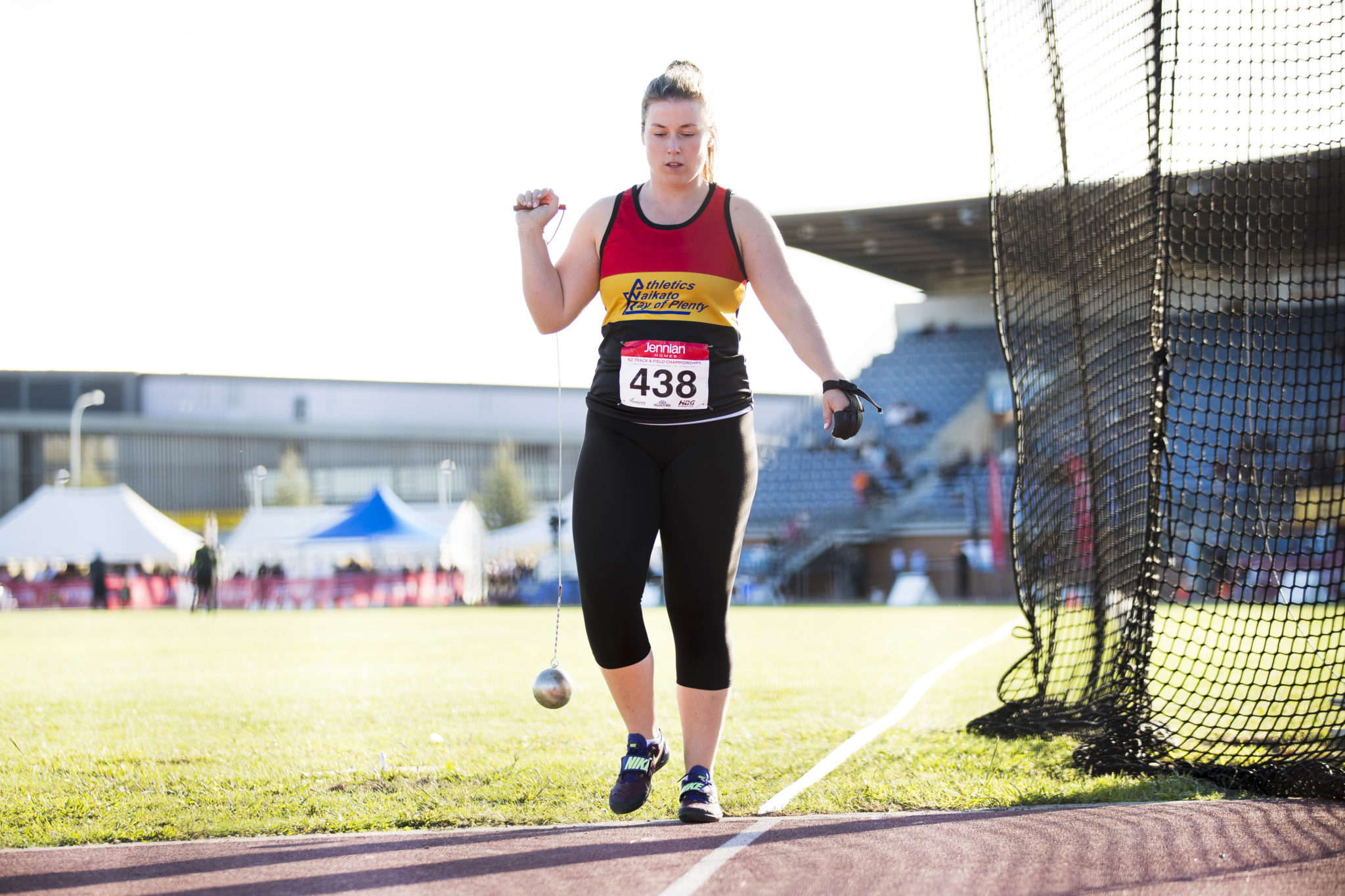 Julia Ratcliffe prepares for one of her throws at the Jennian Homes New Zealand Track and Field Championships (Photo: Alisha Lovrich)

Julia Ratcliffe produced the outstanding memory of the recent Jennian Homes New Zealand Track and Field Championships in Hastings by setting a New Zealand and Oceania hammer record and also surpassing the automatic standard for the Tokyo Olympic Games. With the help of Steve Landells, the 27-year-old Hamilton-based thrower reflects on five pivotal competitions in her lengthy 12-year international career.

What Julia says: I remember winning in Sydney, although I don’t think I was expected to. A lot of emphasis was put on the rankings before the event and that one or two of my competitors had thrown further than me so, in my mind, I was going to finish behind these women. To go on to win that competition and to get to sing the national anthem for the first time in my career was a special moment. It was dad (and Julia’s coach, Dave) who said ‘You can exceed your expectations in a big competition’, which is a philosophy I’ve since adopted throughout my career. My victory in Sydney was probably my first experience of that.

Looking back, probably the biggest thing I got out of the trip was what it takes to do well at an international competition. I was aged only 15 at the time and I remember Dave saying, ‘I know it is an exciting trip away but you should be careful not to walk around all day, every day before the comp’. I remember thinking at the time, that viewpoint sucked! I just wanted to hang around with my new friends and have a great time in Sydney. But I heeded his advice and it definitely served me well. I learned an important lesson that the fun tourist activities, which expend a lot of energy, should wait until after competition. Experiencing the importance of this early in my career certainly helped me cope better with this reality in future multi-sport competitions. For example, not attending opening ceremonies if they are too close to my competition.

What happened: Julia finished 26th in qualification (out of 32) with her best effort of 64.72m more than six metres down on her PB at that time.

What Julia says: The London World Champs was one of the lowest moments in my career. I was in a really low place both mentally and physically. I was in a lot of pain with a collarbone injury and at that time I was just not enjoying my throwing. I was putting so much pressure on myself to just endure it. Honestly, I’m pretty sure I’ve blanked out any memories of that competition.

Even though it was such a low point for me, I’m glad it happened. It is my yardstick of my no-go zone. If I ever feel like I’m approaching a similar scenario, I’ll stop and take whatever steps I need to fix it.

That year there were so many life changes happening to me. I graduated from Princeton University, which was an all-consuming but such a happy chapter in my life for four years. I had my final NCAA Championships and my first ever World Championships. I was also moving home to New Zealand not really knowing what was going to happen next, so going through all of these high-pressure situations took a toll. What I learned from my experiences in 2017 and in London was that there are no prizes for training through pain and putting yourself through mental anguish over long periods of time. I had to remember it was my choice to throw the hammer and that, if ever I felt any external pressure, it was mostly made up in my head.

What happened: In her first competition since the 2017 World Championships, Julia made a successful return from injury to win with a best of 67.12m.

What Julia says: Following the 2017 World Championships and my ongoing collarbone injury I was on a reduced throwing programme. I underwent a lot of physio and rehab and I was really grateful for the support I received from High Performance Sport NZ. For some time, I had questioned whether I would be able to get back and compete again, so to return to the throwing circle at Porritt Stadium was a big thrill.

I remember a feeling of happy relief in the way I competed  that day. It was a great to rediscover that love of competing once again. It was a big confidence boost to be able to come back stronger than I thought I would. It reiterated to me that there is more than one way to skin a cat. That I could work off a very different training schedule and still perform well. Dave and I have definitely been more flexible in adapting our training when needed since having that experience. 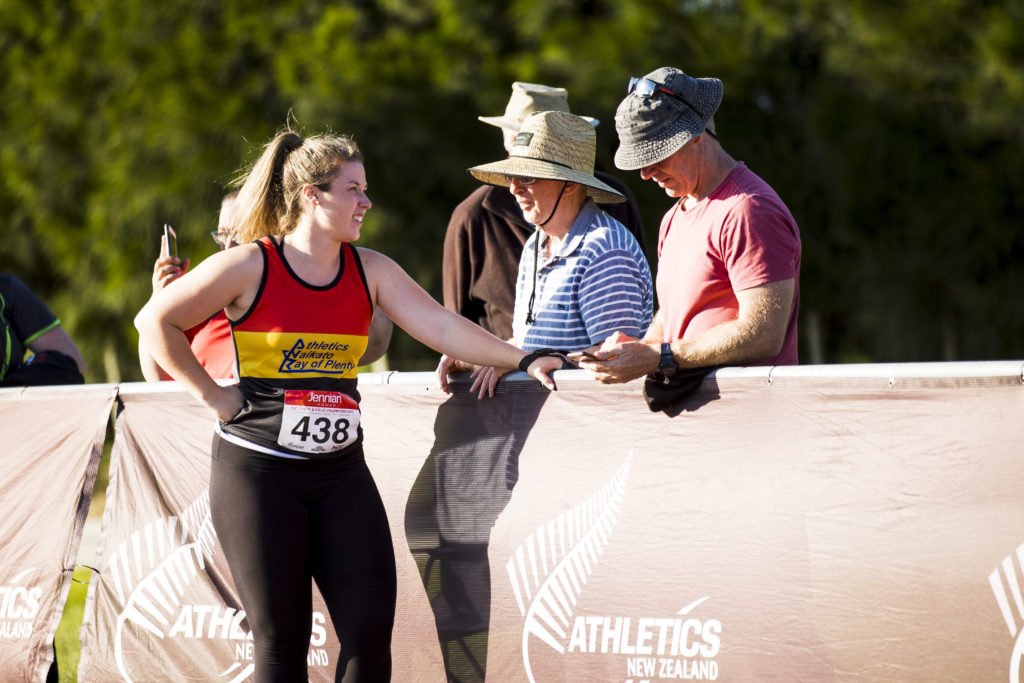 What happened: Julia went one better than the Glasgow Commonwealth Games to strike gold with a best of 69.94m in round five. She led from the opening round and two of her main rivals, England’s Sophie Hitchon and Canada’s Jillian Weir, both no-marked.

What Julia says: I don’t usually get nervous but an hour or two before the competition I think I got a bit of PTSD from my London World Championship experience. I’m not sure whether it was seeing the lights and hearing the noise of a big stadium. I felt really nervous, not doubting myself but having a massive adrenaline reaction.

I remember my two warm-up throws were abysmal. It honestly looked like you had given someone in the stands a hammer for the first time. My weight was all wrong and I was so tense. I spoke to Dave, who tried to calm me down and I had a quiet word to myself and put in place some mindfulness training and breathing exercises I had been working on. Thankfully, by the time the competition started, I managed to pull it all together.

My first throw at 66.19m was not a big one but at least it was one on the board and it felt like a platform from which I could build. Some of my key rivals were struggling, throwing the hammer in the cage, so I was not the only one feeling the pressure.

In round five I managed to extend my lead to 69.94m but I knew I was far from certain of victory. Alex Hulley, the Australian, was having some big throws but they were landing outside the sector.

To eventually go on to win gold was a reminder of how quickly things could turn around. It is possible to go from zero to hero.

The Comm Games in Gold Coast is such an awesome memory and a reminder of why I train for big events. Some 99 per cent of my time in athletics, I spend training in my back yard in Hamilton, which is not all that exciting. Gold Coast reminded me that all that time training for that other one per cent of time is truly worth it.

What happened: Julia enjoyed a dream meet to set a PB of 73.40m and achieve the Olympic qualification distance. Then in round four she threw 73.55m to surpass Lauren Bruce’s Oceania and New Zealand record mark.

What Julia says: I found going into that meet quite hard because some three weeks earlier the New Zealand champs were postponed because of Covid. I didn’t know if I was being a princess about it but seeing other athletes’ social media posts and hearing their post-event interviews, I think a lot of people were in the same boat.

There was a mental toll caused by the uncertainty of whether the event would go ahead and it also caused a real dilemma in training too. Many athletes were halfway through their taper, so had to re-load a little. Usually in training cycles you know how you are supposed to feel each week. But because we’d never experienced this situation of a postponed meet, I really struggled with knowing how much effort I needed to put in training and how tired I was supposed to feel. I felt quite in limbo. I was putting pressure on myself to train really well for the three weeks, even if this was not really feasible. By the time nationals came around, I just needed to relax, which was my number one focus. It was an attitude that served me very well!

In round one I went out to the automatic Olympic qualification mark. This was a massive goal of mine but I somehow had to stay focused. I still had five throws left, I was clearly in decent nick and I did not want to waste them!

I bailed out on a couple of throws but when you push that hard there is a fine line between getting it right and getting it wrong. I got the balance wrong on a couple of throws but got it right in round four (with the 73.55m). It knew it was a good one, better than my 71.13m in round three. How did it feel? I was so dosed up on adrenaline, it was like a primal reaction.

The competition was so significant because it was the culmination of 16 years of hard work for me and my dad. If I hadn’t achieved the Olympic qualifier, I would have had to wait until June for the rankings to be finalised. That is stressful for not only Dave and me but also the rest of the family at home, who have to put up with our moods and stresses. So for me to achieve the Olympic qualifier was a collective sigh of relief for the whole family.