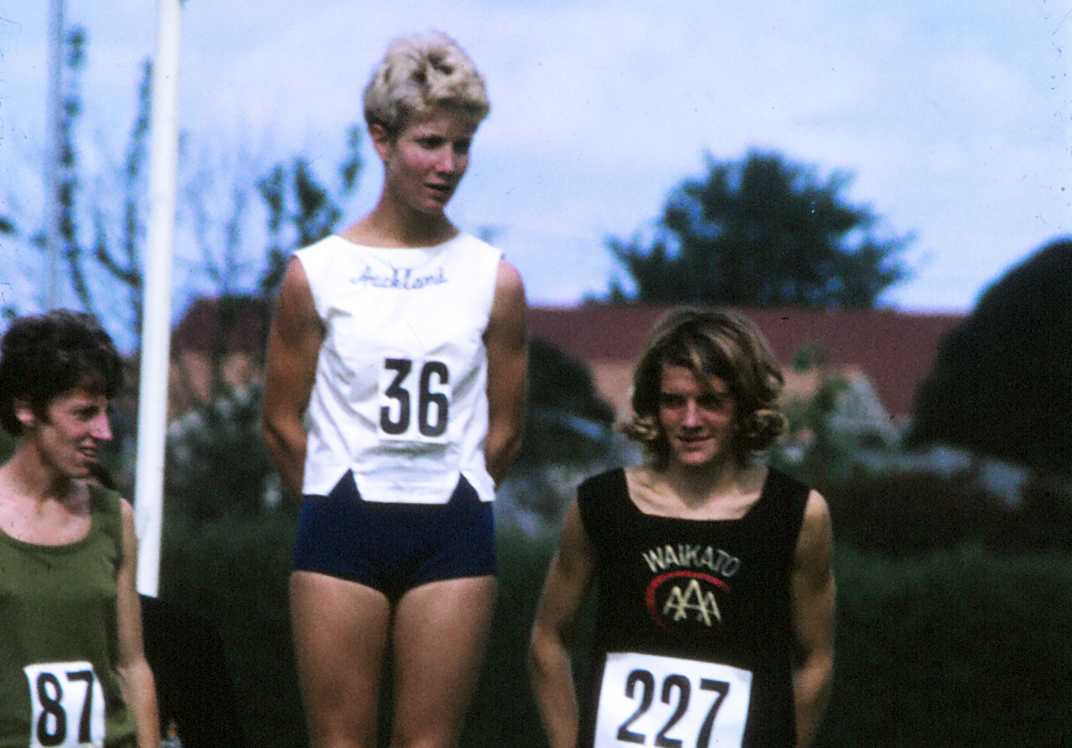 The Cooks Classic in Whanganui on Saturday will witness the revival of the New Zealand Mile Championships after an absence of 52 years. Steve Landells chats to the last woman to secure the title, Heather Matthews, to hear more of her story.

In a long and distinguished career, Heather Matthews grabbed a Commonwealth Games silver medal, claimed a top-six finish at a World Cross Country Championship and snared five national titles. But she has little doubt that it was winning the New Zealand mile title in 1969 which acted as the gateway for so much of her future success.

Then aged 22, Heather ran a PB and national record time of 4:52.5 to claim her maiden national senior crown and although the passage of time has dulled the memory, she remains fully aware of how significant that win was for her career.

“It was such an important race for me because it was my first New Zealand title and it was a New Zealand record. Everything really flowed on from that race,” recalls Heather, now in her seventies.

“I don’t remember a lot of detail of the race other than the excitement of winning.”

The following year, the national mile title was replaced by the 1500m as the premier New Zealand middle-distance title and Heather has therefore remained as New Zealand champion for the past 52 years.

But she will finally be dethroned on Saturday following the revival of the mile championships at Cooks Gardens – the iconic venue which witnessed Sir Peter Snell break the world mile record in 1962.

The event has attracted a stellar line-up of the country’s finest middle-distance athletes and Heather is pleased to see the return of a national title over the classic distance of 1760 yards, or approximately 1609m.

“It’s a good move,” explains Heather, who lives today on the Whangaparaoa Peninsula north of Auckland.

“It’s such an iconic distance, where for many years the top men chased becoming the first in history to run a sub-four-minute mile.”

Raised in Papatoetoe in south Auckland, Heather recalls being timed by her father via stopwatch running around the house and occasionally jumping into the vegetable garden, which was used a makeshift long jump pit, in her youth and at the age of nine she joined the Papatoetoe Athletics Club.

Back in the 1950s and restricted to only the 100m and 200m, Heather performed well but as longer distances were introduced for women she started to flourish. In the mid-1960s she finished fourth at the New Zealand Championships in the 400m. Better results followed in the 800m until, at the age of 22, she achieved her breakthrough success over the mile in Hamilton.

Her victory enabled her to win selection to compete in the Pacific Conference Games later that year in Tokyo. It proved an eye-opening experience for Heather but one she feels fortunate to have tasted.

“At that time I was working as a van driver for a company called O2 Electric Lasers,” she recalls.

“The boss, who was sports mad, gave me a little bit of freedom by allowing me to keep my job for three weeks while I travelled to Japan. That was unheard of back then, so I was lucky in that respect,” explains Heather, who married her first husband Richie Thomson, a New Zealand Olympic cyclist, in 1968.

“I was a fussy eater back then and I think I lived on Coca-Cola and potato chips on that trip,” she says with a laugh. “I went there thinking I was a pretty good athlete but quickly realised I wasn’t that good. I remember finishing sixth in both the 800m and 1500m.”

In 1971, she furthered her international experience as a member of the New Zealand team competing at the International Cross Country Championships in San Sebastian in Spain.

She performed solidly, placing 18th in the senior women’s race, but says she could have performed so much better had she not gone on an ill-timed and slightly comical bout of over-eating the night before her race along with Kiwi team-mate Anne Smith.

“My ex-husband’s cycling coach was from San Sebastian and when he heard I was going to be competing there he said I must meet his brother and wife for dinner. I agreed, although they didn’t speak English and I didn’t speak Spanish so, feeling a bit awkward, I took Anne with me,” she explains.

“We went out to a typical Spanish restaurant where the menus were laid out as appetiser, entrée, main and dessert. We didn’t really know what we were doing and ended up ordering four main courses. The first main arrives, which we think is a bit odd, but to be polite we eat all we can. As more mains come we had to undo the buttons on our uniforms as our stomachs were starting to expand. We didn’t realise they’d also ordered a dessert of strawberries and ice cream. We then forced down some dessert, made every effort to get our pants done up and staggered back to the hotel for bed.

“I remember getting to sleep was really difficult. We couldn’t really lie on our side because we were so full. I had to lie on my back and we didn’t sleep very well. Both of us raced the next day but didn’t perform as we should have. I later related this story to Richie’s cycling coach who had heard from his brother, who said what a lovely person I was, but that he’d never seen a person who ate so much!”

In 1973, she claimed her first New Zealand Cross Country title and also finished a respectable 28th at the inaugural IAAF World Cross Country Championships in Waregem in Belgium.

But all was not well with her coaching set up. Guided by husband Richie, the coach-athlete relationship put a strain on their personal relationship and, in 1974, Richie recommended Heather ask coaching guru Arthur Lydiard – the man who had guided Sir Peter Snell and Sir Murray Halberg to Olympic glory – to be her coach.

Arthur agreed, Heather was put on a high mileage training regime and the transformation was stunning.

“Before Arthur, my Sunday long run was one hour in length,” she says.

“At that point, I couldn’t get my head around why I needed to run any further because I was still winning New Zealand titles and setting national records. But under Arthur’s coaching I was quickly running up to one-and-a-half hours three times a week. I always had speed but for the first time I was carrying out proper endurance training.”

Stronger than at any point in her career, she went on a month-long overseas trip, climaxing with the 1975 World Cross Country Championships in Rabat full of confidence.

On race day in Morocco, Heather put in an inspired performance to place sixth, one behind her countrywoman Lorraine Moller, to help New Zealand to team silver. New Zealand enjoyed an unforgettable championship with the senior men’s team winning gold and Heather has many happy memories of the event.

“We were away for a month and the whole squad became like part of the family,” she says. “I was pleased with my performance, although I would have liked to have been the first New Zealander home. Looking back, I probably left quite a bit out there winning the Spanish title.”

Later that year, she regained the New Zealand Cross Country title before returning to the World Cross Country Championships in 1977, finishing 13th in Dusseldorf.

Heather banked the 1978 New Zealand 3000m title but suffered a blow in the countdown to the Edmonton Commonwealth Games after twisting an ankle during a training run in south Auckland.

Missing three-and-a-half weeks of training at a critical stage of her preparation, she was forced to undergo a 3000m time trial to prove her fitness but thankfully passed the examination and secured her ticket for Canada.

Riddled with nerves on race day – something she was afflicted with throughout her career – team manager Arch Jelley asked Dick Quax to chat with Heather in the warm-up area in an effort to calm the Aucklander.

But, once the gun went, all nerves disappeared and she focused on winning a medal on a windy day.

“I was sat behind Paula Fudge of England and her twin sister, Ann, with one lap to go thinking, ‘I have to get away from them now’,” she recalls of the final. “I passed them on the penultimate bend but on the back straight the wind hit me like a brick wall. I struggled down the back straight and Paula went on to win.”

Heather earned the consolation of silver in 9:20.69 and a place on the medal dais.

“I was aged 32 at the time and the oldest woman competing in that race,” she explains. “I was pleased to win silver but I remember as they started to play Paula’s national anthem feeling annoyed it wasn’t the New Zealand anthem.”

The following year she retained her national 3000m title but a series of Achilles injuries over time ended her track ambitions. She switched to the road in the 1980s, making the New Zealand team for the Ekiden Road Relays in Chiba and enjoying several successful stints on the lucrative US road running circuit. She also competed in a handful of marathons, winning the 1985 Rotorua Marathon in 2:48:00 at the age of 38.

She also later set a world record F45-49 for the mile before formally retiring from the sport at the age of 47.

Heather remained closely connected to the sport for many years. She helped set up the Kerikeri Striders Club during a four-year stint living in the Northland town and coached Lesley Morton to the 10,000m at the 1992 Barcelona Olympics. She also served on the IAAF Athletes’ Commission as a representative for Oceania.

Happily married to second husband Jeff Matthews, himself a former World Cross Country representative, she returned to student life at the age of 58 to study a full-time fine arts degree at WhiteclIffe College of Art and Design.

Today, she teaches a weekly art class to adults at the Whangaparaoa Art Lab Hall.

“I love to see the students improve, in some ways it’s just like being an athletics coach,” she says.

Today a keen croquet and petanque player, she can no longer run but acknowledges the huge part running has played in her life.

“It has given me self-belief and camaraderie,” she explains. “Before I started running I’d never been further north than Kaeo or further south than Rotorua. Running has taken me all around the world and I’ve never had to pay for a thing. I’ve had a wonderful life and I know if I die tomorrow I won’t have any regrets.”

The Cooks Classic will be streamed live on the Sky Sport Next YouTube channel from 7pm.