Rookie Morgan proves a queen of the trails 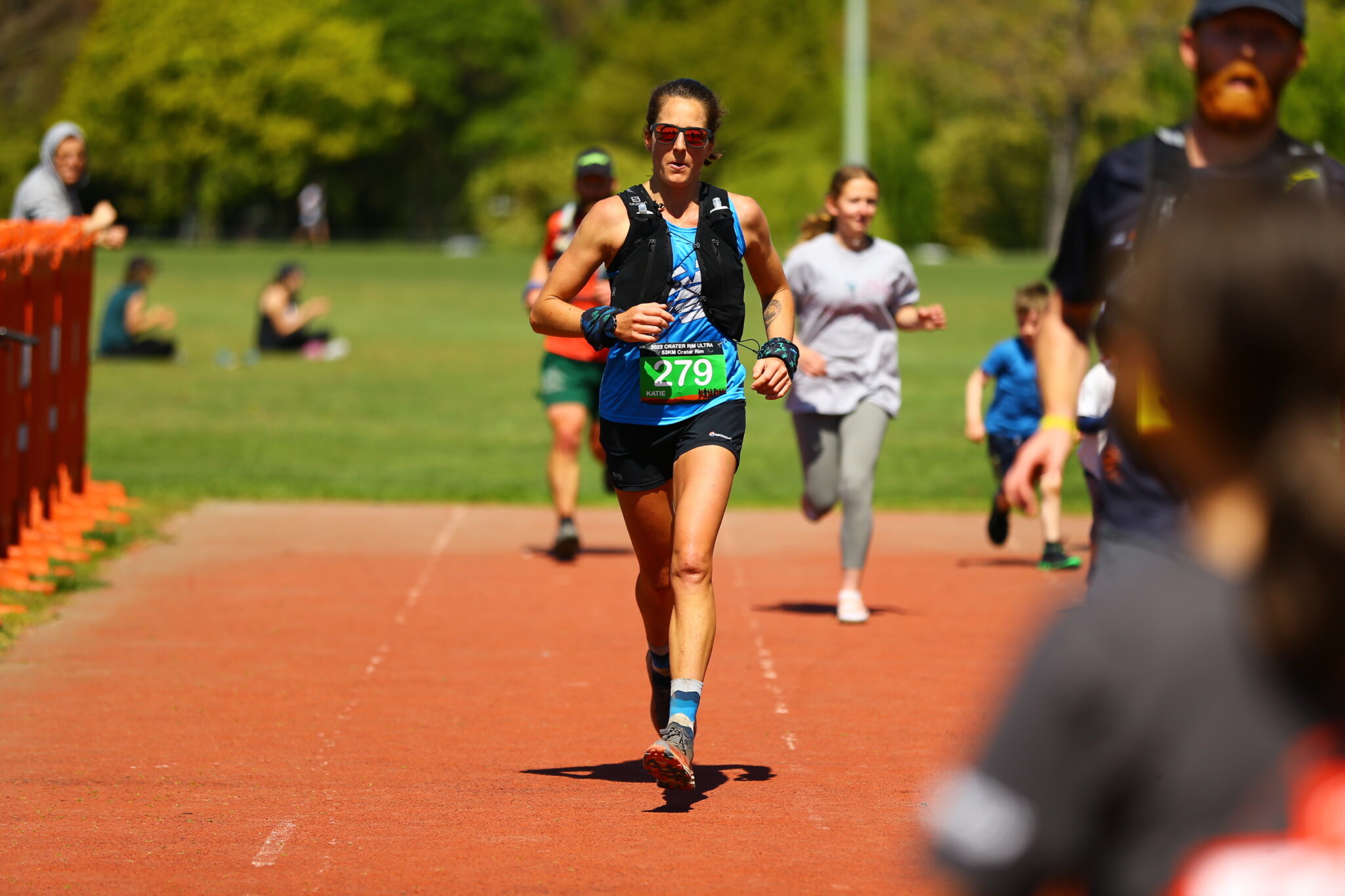 Katie Morgan stormed to an impressive victory to be crowned New Zealand Trail Running champion in Christchurch earlier this month.

When recently minted New Zealand Trail Running champion Katie Morgan remarks that it “does not sound quite right” to have the national crown place next to her name, it is not a statement made with false modesty.

The 32-year-old is after all a relative newbie to the sport, and despite a handful of promising results it was a genuine surprise to many – not least to Katie herself – that the Run Timaru athlete secured the national title at the Crater Rim Ultra by a huge margin of more than 30 minutes last weekend.

“I had maybe hoped for a top three, although I didn’t really know what to expect,” explains Katie. “It is awesome to be New Zealand champion, but I don’t think it has sunk in yet. Maybe over time I’ll get used to it.”

Born and raised in Southern England, her primary sport in her youth was hockey and she played to a county age grade standard. However, as a schoolgirl she also hinted at her running ability. Katie competed for Haywards Heath Harriers in mid-Sussex and recalls finishing inside the top 60 at the English Schools Cross Country Championships.

After leaving school running fell by the wayside as she spent a lengthy time travelling in Thailand, Australia and New Zealand. She lived for a year-and-a-half in the Bay of Islands, working as a scuba diving instructor but it was only after heading back to England for a two-year period, did she re-engage with running.

“To be honest, I was a bit bored on a weekend, so I re-joined Haywards Heath Harriers,” she explains. “I started racing mainly in road running and cross country and that definitely got me hooked.”

Blown away during her magical time living and working in the Bay of Islands her desire was always one day to return to New Zealand and in 2018 she returned to Aotearoa to settle in Blenheim on the South Island. Living in a camper van she worked as a scuba diving instructor in Picton, and it was during her time in Marlborough when she first developed a passion for trail running.

“As all my friends in Blenheim were also running, we would do a trail run every weekend with the group,” she adds. “During my first year I didn’t do anything too long, but I loved running the trails, I prefer undulating runs and you can’t beat the scenery, particularly here in New Zealand.”

Getting “itchy feet” after two years in Blenheim she took to the camper van – which has since been upgraded to a caravan – and relocated to Fairlie – 45 minutes from Timaru – two years ago. It was here she took up her current role as a wilding pine and pest control worker in South Canterbury – which involves spending every week away from Timaru in a range of locations across the region.

Fitting in training six days a week around her work demands can be tricky. Often limited to between 60-80km a week – Katie’s mileage is far from extensive – but she says her work serves up some big advantages when hitting the trails too.

“My job probably helps a lot because I’m on my feet so much,” she explains. “I’m always on the hills carrying around heavy chainsaw gear and chainsaw boots. My legs are well conditioned to the demands of endurance.”

In January she competed in the first big trail race of her career the 60km Kepler Challenge and she impressed to finish third in 6:06:44 behind race winner and international trail running superstar Ruth Croft.

It was a memorable performance from Katie and unquestionably gave her confidence.

“I did a lot better than I thought and I really enjoyed running that kind of distance,” she explains. “To finish third, I was absolutely stoked. It was one of my best days in my running life.”

The cancellation of many key events during the first half of the year stalled her competitive progress somewhat, although she has since produced a strong showing to successfully defend her Mackenzie Half Marathon title in 1:31:54 and she also recorded a handy 38:21 to finish fourth at the Canterbury Road Championships, which offered encouragement to the adopted Kiwi.

Having entered the cancelled Crater Rim Ultra in 2021 and keen to return to run for the 2022 edition – which doubled as the New Zealand Trail Running Championships – she adopted a sensible tactical approach to the challenge given her relative lack of experience.

“My aim was to finish with something left in the tank,” explains Katie. “I didn’t want to go crazy on that first climb, so I had something left for the more runnable parts of the race. I did as I planned, although it was hard to know when to push because I’m inexperienced over the distance. I could definitely feel it over the final 10km, but I had a guy closing in on me which gave me extra motivation to keep going and not let him by me. I’m not sure whether he let me, but I got the better of him by four seconds.”

Completing the race in a course record time of 5:41:08 she bettered the winning time of Nancy Jiang from two years earlier to claim a comprehensive win by more than 30 minutes from Katie Smith (Olympic Wellington) and now looks to the Mission Mt Somers race and Queenstown Marathon before targeting another stab at the Kepler Challenge in December.

“Kepler is the main one (for the summer season). I’ll be up against Ruth Croft and Nancy Jiang, I just hope to do as well as I can and improve on my time for next year.”

Living in a caravan on a weekend with her partner and fellow Run Timaru member Mark Kennedy, Katie leads a simple life yet and has few fixed goals for her running future.

“I’ll definitely try to do some longer races,” she says. “I’m entered for the Old Ghost Ultra (in February next year) but I don’t have any big goals by aim is just to run more and do what I’m doing better.”

Self-coached, Katie has not ruled out working with a formal coach in the future to maximise her talent. Yet whatever happens she cannot see a life without the thrill of running.

“I just so enjoy being out there on my own running the trails you get to see so many more things,” she says.  “We are so lucky in New Zealand with its amazing trails.  Running the trails is literally all I want to do on my weekends.”