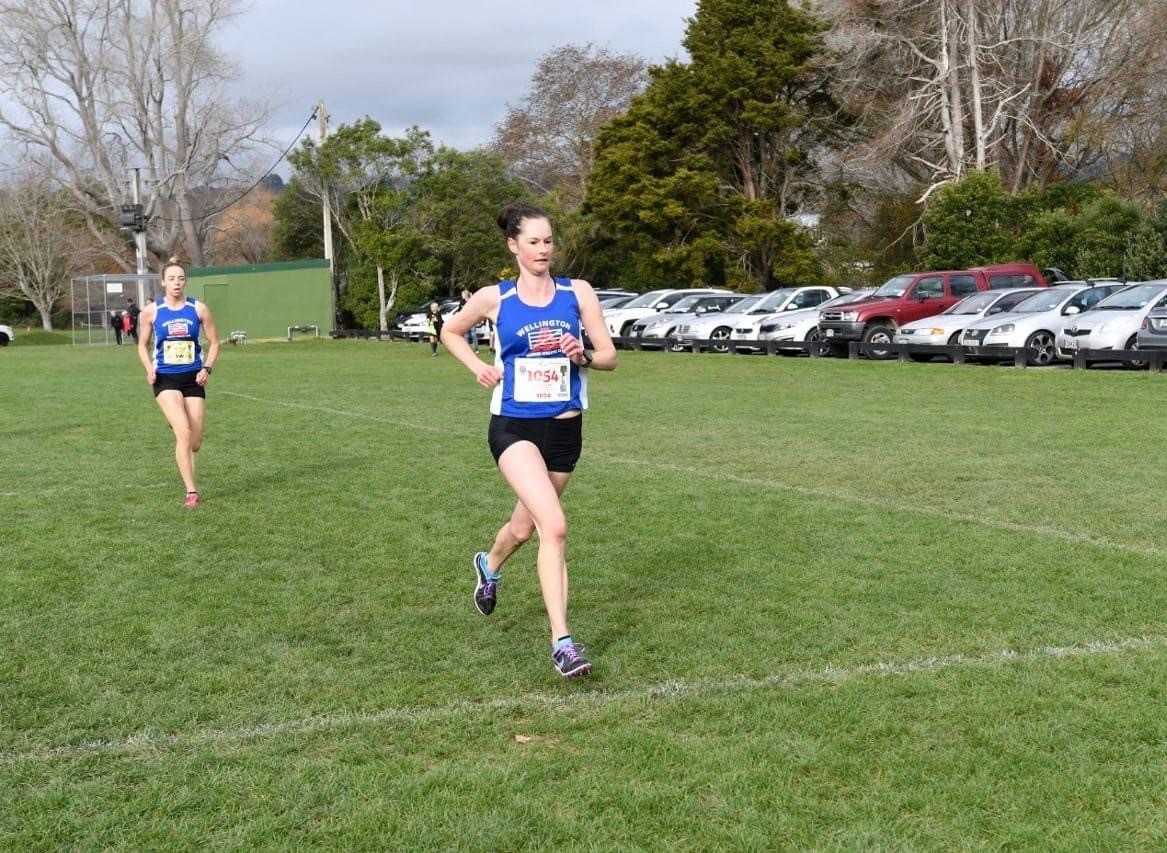 Sarah Drought is in the form of her life after setting a 10km PB last month at the Timaru Ten. (Credit: Sharon Wray).

Modestly describing herself as a “competitive/recreational runner” mum-of-two Sarah Drought is currently in the form of her life and achieving results which could propel her to a spot on the New Zealand team for the World Cross Country Championships, which will be announced later this month.

Aged 34, Sarah dipped below the World Cross Country performance standard by running a 10km PB of 34:15 in Timaru last month and after also snaring national 10km road and 10,000m track silver medals this spring she appears poised – subject to selection – for the biggest competition of her life.

Yet many may be unfamiliar with the story of the Wellington Harrier who has emerged back on the national scene after the best part of a decade away.

Raised on a dairy farm near the small Taranaki surf town of Opunake, Sarah flirted with running at primary school where she first become aware of her endurance talent by performing well in cross country running. However, it was only later attending Sacred Heart Girls’ College in New Plymouth did running become a more serious pursuit around the age of ‘14 or 15’.

“I remember selection for the North Island Championships, which felt like a big deal,” she recalls. “My training became more structured as part of a small group coached by Dale Warrander joined Egmont Athletics and benefited from the energy and effort of Karen Gillum-Green, who was a huge driving force at the club.

Yet after leaving school and moving to Wellington to study economics and finance she picked up an injury during her first year of study and “stepped away” from the sport for several years until returning to running in her early 20s.

Choosing to run recreationally during her time at university, she only opted to return to the competitive side of the sport after starting her working life for the Reserve Bank – initially motivated to join Wellington Harriers by the prospect of meeting new people.

It was here under the coaching of Tony Rogers, where her career quickly started to accelerate. Training with a quality group and thriving under a structured programme within a couple of years of re-starting the sport she enjoyed a purple patch, winning the 2012 senior women’s national cross country bronze and later that year gold at the New Zealand Road Championships in Wellington before early in 2013 winning a 3000m national bronze on the track.

“Probably the biggest surprise was winning that road medal,” she explains. “My training was not really geared towards the 10km, so perhaps that was a reflection I was more suited to the longer distances.”

Yet no sooner has Sarah emerged as a serious contender on the domestic scene then injuries started to take a toll. Hip injuries, stress fractures and Achilles injuries derailed her career and after several seasons of toil she opted to dial down her expectations by focusing on local club races in Wellington.

By adopting a more conservative approach to training, she remained mostly injury-free and she even opted to compete in several longer trail races for fun as a means of easing the pressure on her shoulders.

Children were to further put the hand brake on her running aspirations and in early 2019 she gave birth to her first child, Freddie, followed 24 months later by the birth of her second son, Jacob.

While she maintained her fitness during this period and re-started very gentle running six weeks after each pregnancy, Sarah insists it was only early this year did she “feel like her old self again after building up some more consistent training and getting better sleep” on the back of this she set some “loftier running goals.”

Carrying out the bulk of her training on her own in the suburb of Karori, she enjoyed a breakthrough performance to win the Wellington Half Marathon on a windy day in June with a near three-minute PB of 1:17:06.

“To set a big PB was motivating, and it gave me a lot of confidence,” she explains. “I was training around 70km a week, so I knew if I could add on more training there was scope for further improvement.”

In September, Sarah enjoyed another good performance to win a silver medal behind Hannah Miller at the national road championships in Upper Hutt – ten years on from winning gold at the event – recording 36:11.

Yet it was while chatting post-race to coach and Athletics NZ Out of Stadia Co-ordinator John Bowden, which was to prove a significant turning point.

“I had been self-coached for a long time, but I was a little unsure of what to do to improve, so I sought out John and started working with him,” she explains. “One of the motivations for joining a coach was I knew in the back of my mind that winning a place on the World Cross Country Championship team was within me. John has given me a lot of confidence and has added more steadier running into my training. I’m now running around 80-85km a week – with a harder longer run and some lengthier workouts.”

As a mum to two young children and working three days a week as Principal Policy Advisor for the Ministry of Business, Innovation and Employment, fitting training around such demands is tough yet with the support of her partner, Dave, she makes it work.

“I manage to carve out time on a weekend for the longer runs and workouts, but most days I squeeze something in, even if it is late in the evening,” she adds. “Dave and I tag-team a fair bit on the weekend, so it is not unusual for me to come home from a long run and then rush out with the kids for a couple of hours. That’s pretty tiring and not ideal for recovery, but its all part of making it fit with our family.”

Yet under John’s guidance she feels she has made some genuine gains. Adding a little more volume and greater distance to the workouts is starting to reap rewards. While enjoying an uninterrupted training period and less disrupted sleep at home has also made a positive impact.

Targeting a World Cross performance standard time of 34:30 – which initially seemed a long shot – suddenly appeared a realistic goal and Sarah set herself two opportunities to secure the mark at the Timaru Ten road race and then the New Zealand 10,000m Championships in Wellington.

“We looked at different options for the performance standard and it was mentally nice to think I had two chances,” she explains. “Timaru looked the better chance to have nice weather, and on the day the weather was great and the course fantastic. We had a great pacer through the first 5km and Katherine Camp and I were able to work through the final two laps of the four-lap race. Although Katherine was much stronger in the final 500m to be able to get the time (she ran 34:15) was a great moment for me. Chasing my running goals adds extra pressure on our family life, so to have been able to achieve the time confirms my belief that I have more to give, and it makes all the effort worth it.”

Last month her rich vein of form continued as she won silver at the New Zealand 10,000m Championships in Wellington behind Hannah Miller, recording 34:36.41 on her track debut over the distance.

It was another strong performance which solidifies her current status, but Sarah believes she has further room to improve and takes heart from some women running well into their 40s, like Australian marathoner Sinead Diver who represented her country at the Tokyo Olympic Games at the age of 44.

“I take inspiration from women like Sinead because it shows there is scope to still improve in your late 30s and into your 40s,” she explains. “In the future, I’d like to get my 10km and half marathon times down, but any personal goals have to be balanced by making sure this does not add too much strain on family life.”

Yet in the shorter term should she win selection for the World Cross Country Championships in Bathurst, Australia on 18 February what would it mean to her?

“It would be really special to be part of the New Zealand team and exciting to toe the line with some of the world’s best athletes be at a big event with top calibre athletes,” she explains. “I have been a part of a New Zealand team once before at the Ekiden Relays ten years ago, but if I get selected the World Cross Country Champs would be a step up. It would be really neat to work towards a common goal of achieving not only a good individual result but also contributing to a strong team performance.”