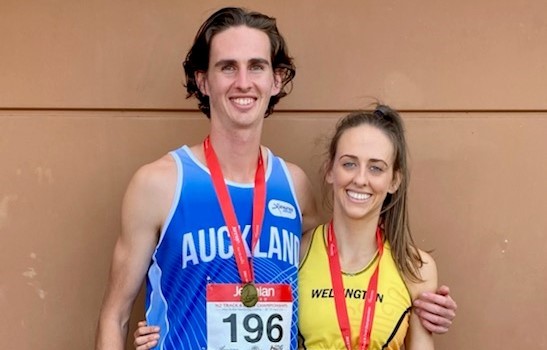 When siblings Anna and Scott Thomson created a slice of history by striking gold in the senior triple jump competitions at the 2021 Jennian Homes New Zealand Track & Field Championships, it was a long time in the making.

While Anna secured her fourth national women’s triple jump title in six years – courtesy of a personal best of 13.06m to move to sixth on the all-time New Zealand rankings – older brother Scott finally kept his side of the bargain by winning his maiden New Zealand senior triple jump title following more than a decade of trying, which included no less than eight national triple jump silver medals and two bronze medals.

It was a moment of euphoria for the Thomson household – which prompted a post-competition comment from the sidelines from dad and coach, Richard, of “it’s about time!”

“We felt maybe we should have done it earlier,” said Anna, of the family achieving the double after Scott had come tantalisingly close to gold on so many occasions.

“It made for a nice evening because one of us often performs better than the other.”

Perhaps not unsurprisingly given their choice of event, Anna and Scott have followed a similar athletics path.

Having Richard Thomson – the 1996 national shot champion and a former three-time national medallist in triple jump – as a father the pair, who grew up in Porirua, took up athletics at the Mana Club in Wellington from the age of five.

Both Scott and Anna tried all the athletics events, with the latter featuring predominantly as a middle-distance and cross country runner in her youth.

However, in their formative years, athletics was all about having enjoyment.

“We were never superstars as juniors,” reflects Anna. “We never won Colgate Games or the inter-club competitions. We just did it for the fun of it. We did it because it was something our family really enjoyed, and we were passionate about.

It was only in their early teens when they committed to the triple jump. First Scott – the elder brother by three years – and later Anna followed suit. Showing a natural aptitude for the event and with their father offering them coaching guidance, the pair both landed triple gold medals their final year of competing at the New Zealand Secondary Schools Championships.

So, what do the Thomson siblings love about the triple jump?

“It is the challenge of it,” explains Anna, 26. “Like any athletics event, you are looking for continuous improvement and there are so many aspects of the training you have to work on to improve. The training is never boring or monotonous and when it suddenly all clicks together, it feels like a perfect jump – it is a great feeling.”

Scott believes the analytical nature of both siblings lends itself to embracing the technical demands of triple jump.

“To use the iceberg analogy, when it is done well you’ve only seen the tip of the iceberg but there are so many elements that you don’t see under the water. So much effort and detail has gone into the process and that is part of the attraction.”

Anna is based in Porirua while Scott, a graduate architect who moved to Auckland two years ago, continues to be coached remotely by dad with the help of Auckland-based coach Paul Lothian.

While some would shudder at the thought of being coached by their father, the Thomson siblings admit they are in an extremely fortunate position.

“When we started triple jumping, we realised dad – given his background in the event – had the best level of expertise in the Wellington region to be able to coach us,” explains Scott. “We felt dad was our best option.”

The closeness of their relationship acts as a real advantage, according to Anna, because as a father he has the flexibility to balance Anna’s training around her work demands. Scott adds: “Dad will always give a very honest answer but at the same time he’s willing to listen and learn. Dad will always strive to learn new ways of training and he’s a very good communicator. Coming from an engineering background he also has an analytical mind.”

The dynamic has clearly worked as the Thomson’s have made their mark on the domestic triple jump scene for more than a decade.

In fact, the pair act as a motivation to one another according to Anna.

“We are supportive of each other,” she adds. “If I watch Scott compete before me and he does poorly I always feel down. I have to get past that myself. When we both do well it is a special moment.”

Good pals today, it wasn’t always the case in their youth. Scott admits typical brother and sister conflicts erupted and they had a classic sibling rivalry.

“We were competitive as kids,” he says. “We never played boardgames as kids growing up because it would always end in tears.”

Possessing similar analytical minds, Scott says both siblings are “technically focused” with Anna adding what they lack in natural strength they make up for technical expertise and work ethic.

However, if each could pick a quality from the other sibling what would it be?

“I think Anna is probably more tenacious than I am, and maybe has a little more of that grit your teeth tenacity,” he says.

“For me, I’d like to have Scott’s dedication to training outside of hours,” adds Anna. “He’ll always go that extra mile to make sure he is doing his rehab and prehab exercises, mobility work and stretches. I can be quite lazy when it comes to those aspects.”

After winning three successive national triple jump titles from 2016-2018, Anna had to settle for silver and bronze medals at the 2019 and 2020 editions. However, a number of factors came together in the winter of last year which contributed to her enjoying the best season of her career in 2021.

She changed jobs and moved to new role as a cyber security consultant at an organisation which has given her greater flexibility to train. The lockdown period last year gave her more scope to work closely with her father and coach and she discovered great volume in her training has brought about sizeable improvements.

“Last season (the 2021 summer season) was the best of my career,” explains Anna. “I was undefeated in every competition, and I broke 13m for the first time (with a best of 13.06m achieved when winning the New Zealand title). Everything clicked together last season. To finally be able to break 13m was quite a milestone.”

For Scott to finally end his long sequence of 10 minor medals in the senior men’s triple jump in Hastings was a huge moment for the Auckland-based jumper, particularly having endured one of the lowest moments of his career at the 2020 nationals.

There Scott injured his adductor muscle in warm-up and although he continued to compete, he was understandably well down on his best.

Describing the experience as “demoralising”, since then he has kept his body healthy by tapping into physiotherapy skills of Vaughan Craddock and improving on his mental skills with the help of Dave Wood, “who has worked on my breathing mechanics to help me get in the right headspace.”

This has allowed Scott, who competes for Auckland City, to emerge a stronger, more robust athlete for the 2021 season determined to finally strike gold on the national stage.

“Throughout my senior career I’ve always been up against athletes that were a bit better than me,” he says. “I’d often have a good season but would pick up a niggling injury leading up to nationals – which would hold me back.”

“The recent nationals were the highlight of my senior career so far,” he adds of his victory with 14.65m. “After years of toiling away, to finally get that gold was amazing,” he adds.

Proving hugely motivating for Anna a few hours later on the second and final day of the 2021 nationals, she too claimed her gold to complete the Thomson family double.

But what next for the triple jumping siblings?

“I still have the same goal to compete at an Olympic Games,” adds Scott, 28. “There is a chance I might not make it, but regardless I’m going to try as hard as I can to get to that level.”

Anna too would love to grace the Olympic stage and adds: “Now I’ve jumped 13m, the New Zealand record of 13.91m held by Nneka Okpala now seems like a realistic goal to hunt down.”