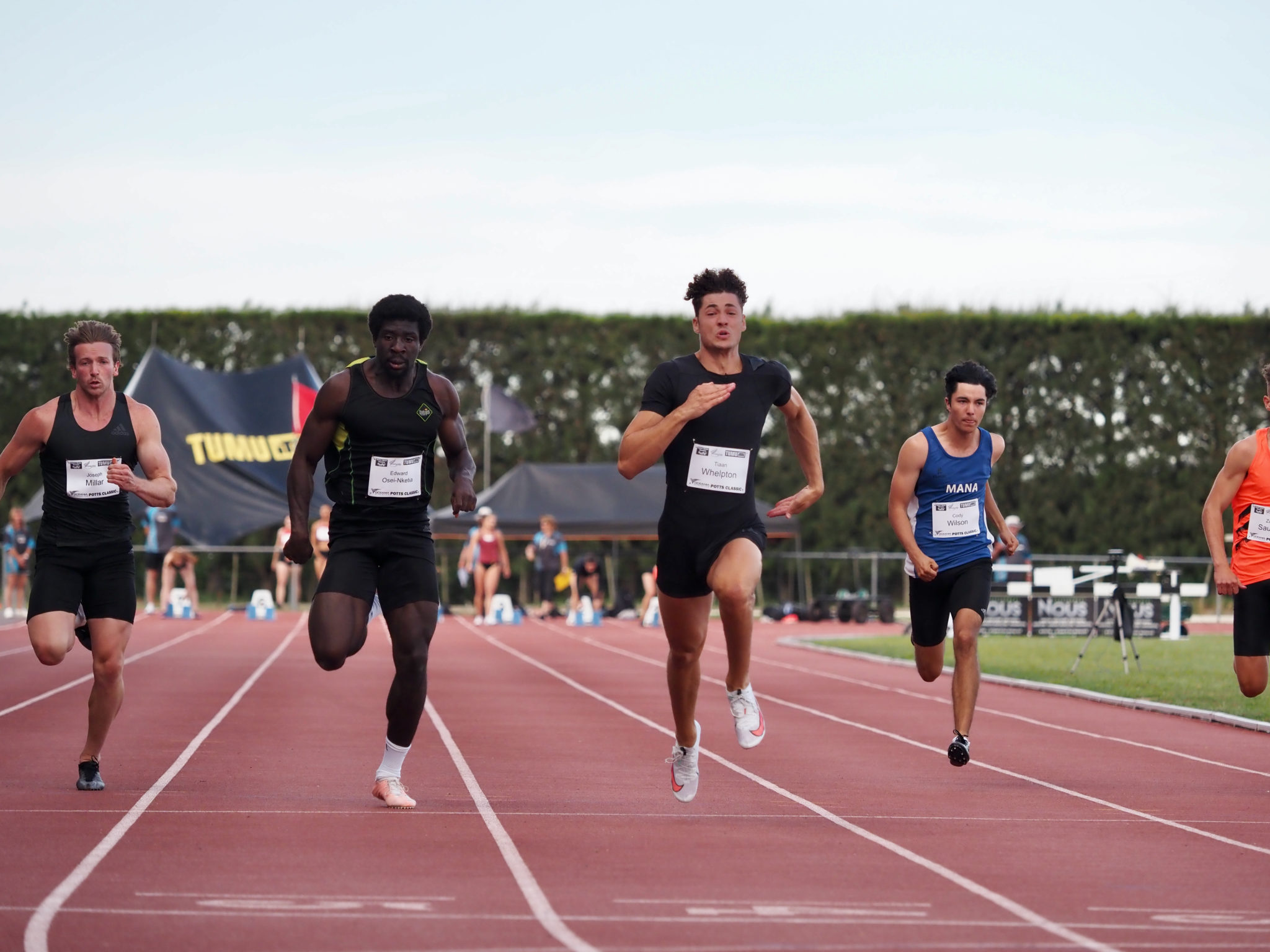 Tiaan Whelpton on his way to an upset win in the men’s 100m (Photo: Mark Roberts)

A resident record, some blistering sprint performances, top quality throws and an enthralling battle for the New Zealand 3000m Championship men’s title provided the highlights of an pulsating day of action at the Potts Classic in Hastings.

In sunny but blustery conditions, Tiaan Whelpton shook the foundations of New Zealand sprinting by claiming several significant scalps on his way to a sensational victory in the men’s 100m.

The 20-year-old Christchurch-based sprinter had earlier served his intent by carving 0.13 from his PB to claim heat one in a blistering 10.37 (-0.1m/s) and climb to joint sixth on the all-time New Zealand rankings.

But the 2020 national 100m bronze medallist went on to show it was no fluke, by proving unstoppable in a highly-charged final.

After making a slick start from the blocks, Whelpton quickly opened up a clear advantage on the field. The Cantabrian continued to maintain his lead for the remainder of the race, comfortably repelling the challenge of pre-race favourite and national 100m champion Eddie Osei-Nketia to stop the clock in 10.47 (-0.7m/s) – a clear 0.14 ahead of Osei-Nketia. Five-time New Zealand 100m champion Joseph Millar (Tauranga) placed third in 10.79.

“I was stoked with the performance, I came to give it a good go and finally show people what I’m capable of,” Whelpton said.

“It’s a pretty scary thing to have Eddie on my heels. I’ve always been a good starter but the boys normally catch me towards the end. But I’ve put a lot of focus on my top-end speed in training and it looks like it’s worked. I’m super happy and grateful to be running the times I am.”

The 23-year-old, who last weekend in Auckland posted a blistering New Zealand resident record and PB of 11.35 and within 0.03 of the long-standing national record, was dominant from the outset and powered clear of her rivals to claim victory in a time of 11.57 into a stiff headwind of -3.2m/s.

A blistering final lap by Sam Tanner meanwhile earned the rising middle-distance talent the national 3000m title to provide a rousing finale to a compelling day of athletics in Hastings.

Tanner, who earlier this month set a 1500m PB of 3:36.44 in Tauranga, assumed the lead for the first 1km before local Hawkes Bay hero Eric Speakman took up the pace.

With two laps remaining, Tanner’s training partner and national 5000m champion Hayden Wilde swept to the front but at the bell Tanner returned to the head of affairs with George Beamish and Speakman in close order with seven men still firmly in medal contention.

On the final lap, Tanner kicked clear of the field and although Speakman – a hugely impressive 5000m winner at the Night of 5s last month – loomed on his shoulder, the 2019 national 1500m champion had too much speed down the home stretch to stop the clock in a PB of 7:54.16.

Speakman (7:54.69) maintained his rich vein of form to claim silver with the fast-finishing Beamish of Athletics Wanganui earning bronze 0.40 further back.

“I’m pretty stoked with it,” said Tanner, who next week plans to run the mile at the Cooks Classic.

“We all worked together to push hard and the first few laps set us on a nice path to running a quick time. I didn’t really have a plan for the last 400m, I just thought I would run the first four laps and see how I felt. I was stoked with how it turned out.”

Kara Macdermid (Palmerston North) lived up to her status as a pre-race favourite to claim her first national senior title with a dominant victory in the women’s 3000m.

Macdermid, 23, who last year won a national 1500m silver medal, broke free of the field around the halfway mark before serenely accelerating away to secure a comprehensive victory in a time of 9:44.27.

The 19-year-old, who last weekend edged closer to the mark with a 63.30m PB in Tauranga, showed he was in the mood for something special by bettering that distance in round three with a 63.49m hurl.

But Bell, who was competing in a favourable wind, saved his best effort for round five as he powered the 2kg discus out to 64.29m and loom to within 74cm of Winchester’s long-standing national record of 65.03m – a mark surely within the capability of this richly gifted teenager.

The North Harbour Bays athlete, who raised his arms aloft in triumph after his 64.29m effort, said:  “I’m really happy, it is still quite early on in the season, so to throw this big is really motivating going into the next couple of competitions.

“The wind was good, I’ve been in shape this year and we were hoping for something big, and we got something big. I’m more than pleased.”

Bell’s eagerly awaited next competition will take place at the ITM in Christchurch on 6 February.

Donning a cheeky T-shirt emblazoned with the words “running is overrated”, three-time world champion (one outdoor and two indoor) Tom Walsh returned to winning ways in the men’s shot.

After being inflicted a rare defeat by Jacko Gill at the pre-Christmas Night of 5s meet in Auckland, Walsh showed signs he was rounding into better shape with all five legal throws beyond the 20m mark, highlighted by a 20.78m effort in round five.

“I was a little bit scratchy but I’m pretty happy with the last three throws,” he said.

“We always like coming here to Hawkes Bay, conditions are always good and it’s a good place to come and throw.”

In the women’s shot, two-time Olympic champion Dame Valerie Adams made a rock solid opening to her competitive year by claiming victory with a best of 18.34m.

In a further illustration of the depth of New Zealand throwing, Adams was pushed all the way by 2018 world U-20 champion Maddison-Lee Wesche (Waitakere), who unleashed her best of 18.08m in the penultimate round, within 24cm of her lifetime best.

But Adams, who four months ago moved her training base to Christchurch to be coached by Dale Stevenson, would not be denied top spot.

“It was definitely a good day to shake off the cobwebs,” Adams said.

“The first throw was good and since moving down to Christchurch I’ve taken a few risks. I’ve got lots to contemplate but I’m very happy with how I performed tonight and I can start looking forward to the competitions ahead.”

Unfortunately for Ratcliffe, the Commonwealth champion who defeated the Oceania record-holder last month at the Night of 5s in Auckland, she made a premature exit from the competition after registering three successive red flags.

Fully capitalising, Bruce put together a consistent series with a pair of 69m throws in rounds three and five, topped by a 72.28m effort in the final round – just over one metre shy of her Oceania record mark, set at the same venue last September.

“I was pretty happy to get the last one out there,” said Bruce.

“I was sitting on 68 and 69m, I knew there was a bit more to come and it was nice to get over 70m. I’m happy with how the competition went.”

Bruce intends to return to competition next weekend at the Cooks Classic.

In the absence of Olympic bronze medallist Eliza McCartney, who withdrew from the women’s pole vault after not quite feeling right in the warm-up, her training partner Olivia McTaggart took centre stage to produce an impressive performance.

The 21-year-old, who last month set a PB of 4.50m, today matched that performance to take top spot courtesy of a second-time clearance.

McTaggart then raised the bar at 4.55m but, despite a decent third and final attempt, found that height beyond her on this occasion.

In the final 200m, Camp gradually gnawed into Greene’s lead but the Hill City athlete would not be denied and claimed top spot by 0.34 seconds from Camp in a time of 2:07.39.

In the men’s 800m A final, national U-20 800m record-holder James Preston (Wellington Scottish) returned from a period of injury woes to claim a dominant win by more than four seconds, recording a slick 1:48.67.

Elsewhere, New Zealand record-holder Tori Peeters opened her season in solid fashion, firing the spear javelin out to a best of 56.25m – a little over 1.5m shy of her New Zealand resident record.

Earlier in the day, 2018 Commonwealth Games 20km race walk champion Alana Barber claimed victory in the women’s 20,000m track race walk, recording a time of 1:37:45.0. In the process, she set an allcomers, national and resident record (subject to ratification).