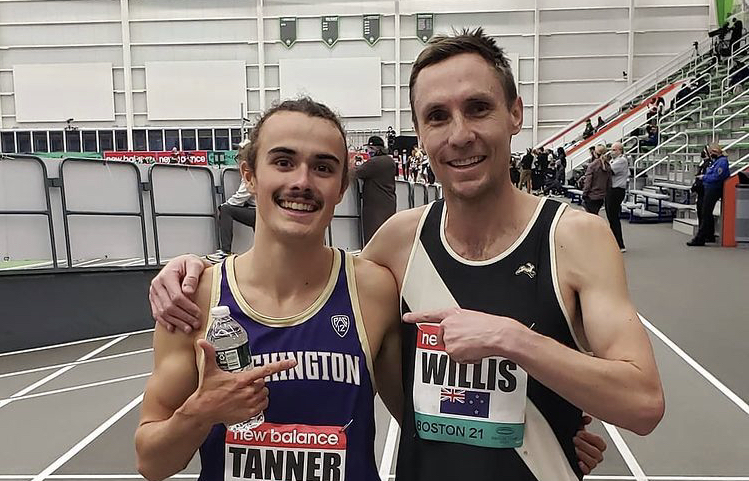 Sam Tanner was delighted to meet the Olympic qualifying standard in the same race as his idol Nick Willis.

Middle distance runner Sam Tanner has become the latest Kiwi athlete to meet the Olympics qualifying standard and has also broken a record in the process.

Competing in the New Balance Indoor Grand Prix on Staten Island in New York, the 20-year-old run a scorching 1500m time of 3:34.72 to finish third in the race.

In doing so, he came in under the Olympic qualifying time of 3:35.00, as well as claiming the New Zealand indoor record.

His idol Nick Willis was also in the race and wasn’t far behind, notching 3:37.53.

“I’m absolutely fizzing,” he said from New York, where he was out celebrating with Willis and fellow Kiwi runner Geordie Beamish.

“I’m just super over the moon. I was hoping for an Olympic qualification, we worked hard and got it, so I’m super stoked.”

The achievement was a personal best for Tanner by nearly two seconds (he ran 3:36.44 in Tauranga early last month) and was also a US collegiate record.

It was made even more notable by the fact that no Oceania runner had ever gone under 3:35 indoors before but both Tanner and race winner Oliver Hoare of Australia did so on Sunday.

“I’m still trying to comprehend how awesome it is,” Tanner said.

“It is such an honour. It’s a dream come true literally because I’ve been dreaming about it since I was 12-years-old. I’m just so, so excited and can’t wait for the opportunity to stand on that start line in Tokyo.”

Having two-time Olympic medallist Willis – the previous holder of the indoor record – in the same race made it even more special.

“He’s always has been a bit of a hero of mine. I’m super honoured to be able to run with him and I’ve beaten his records twice when he’s been in the race, so I think that the key is I just need to keep Nick running and I might beat all his records,” he said with a laugh.

Willis, 37, made his pride in Tanner’s potential clear on social media.

“So excited for young Sam Tanner to run the Olympic A qualifying time today. His 3.34 is a New Zealand indoor record and two seconds faster than I ran at the same age (20),” he posted.

“New Zealand miling is in great hands for a long time to come!”

Tanner is relieved to have lifted the weight of Olympic qualifying from his shoulders and will now work with his two coaches, Andy Powell (Washington) and Craig Kirkwood (Tauranga), to prepare for Tokyo.

“I can’t explain how stoked am to get that done. Now I don’t have to worry about anything and I can just race,” he said.

He is now based at the University of Washington after returning to the United States on the back of claiming the New Zealand Mile Championship title last month at Cooks Gardens in Whanganui.