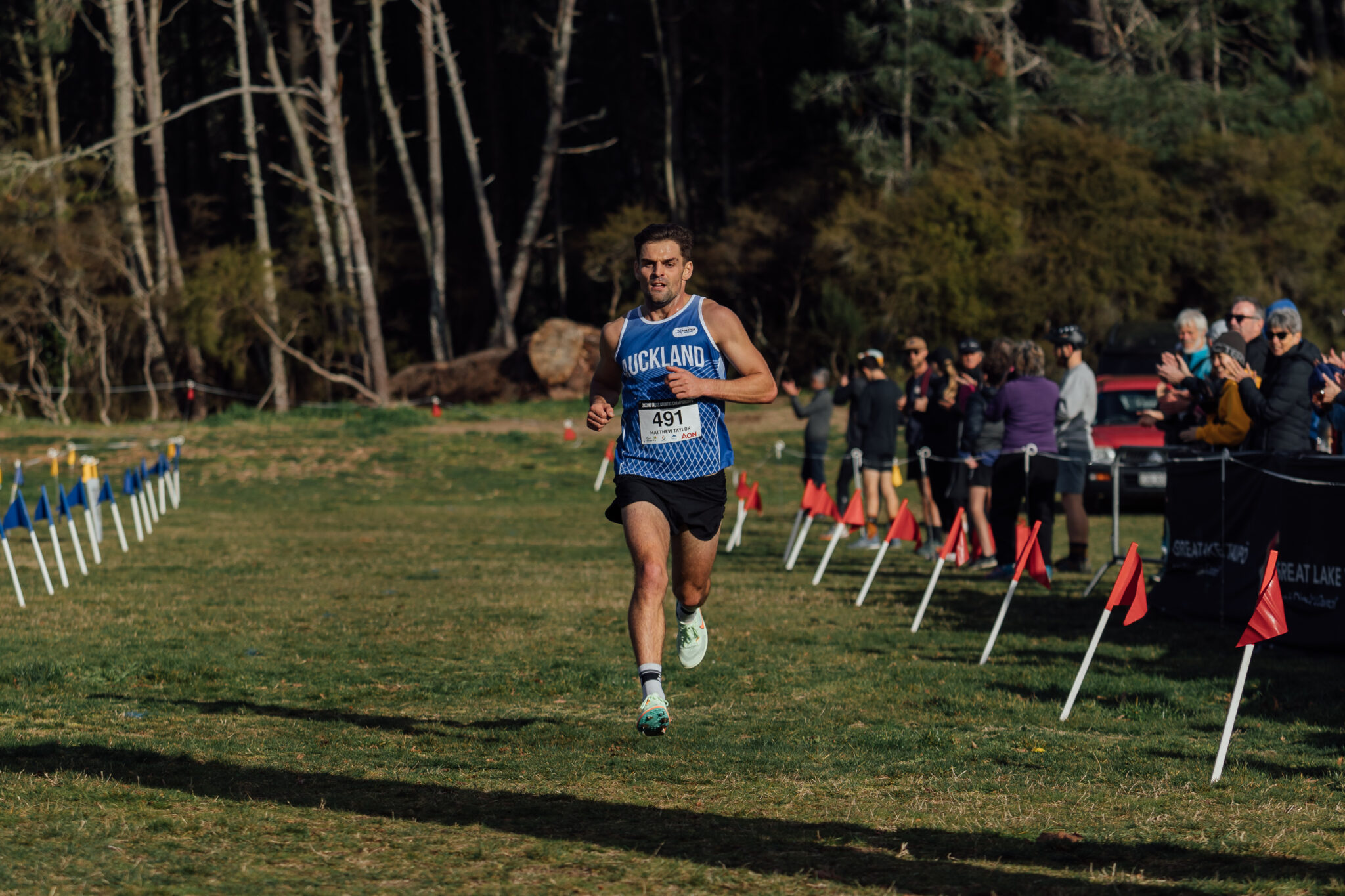 A formidable display of strength and speed by Matthew Taylor enabled the Aucklander to go one better than in 2021 as he claimed the men’s senior title at the New Zealand Cross Country Championships at Spa Thermal Park in Taupo.

The 28-year-old, who earlier this year earned a national silver medal in the mile, made his winning move on Playground Hill to finally repel the valiant front-running display by Cameron Avery (Canterbury) who secured a well-earned silver.

Avery led from the gun and quickly led an eight-strong lead pack with four-time former national cross country medallist Dan Balchin the first to crack. By the 6km mark the group has been whittled down to the eventual top five as the race started to take shape.

Toby was the first to lose contact with the invisible bungee cord shortly firing Oakley and Robertson out of the back. For the final 3km the race developed into a compelling two-way duel between the tall Avery in the red of Canterbury followed by the shorter, stockier Taylor wearing the distinctive Auckland blue coloured vest.

Leading into the final kilometre it was Taylor who launched a stinging attack on Playground Hill and by the time he hit the summit it was game over as the North Harbour Bays athlete had opened up an unsurmountable lead.

He stopped the clock for the 10km test in 31:24 – 13 seconds ahead of Avery with Robertson finishing strongly in 31:44 for bronze.

Taylor, who shares the same coach, Chris Pilone, as silver medallist Cam Avery, said: “It is pretty fantastic (to win). “The goal was to go one better (than last year). I couldn’t have done it with better company, Cam my training partner down south.

“Cam has done a great job throughout, and the advice (from the coach) was our strength was there our fitness was there. It was my first cross country race of the season, so I didn’t know too much about what to expect – just keep it calm.”

Taylor hopes his performance will earn selected to compete at the World Cross Country Championships in Bathurst, Australia in next February.

The in-form 39-year-old mum-of-two, who set a PB of 2:41:12 to win a silver at the New Zealand Marathon Championships in May, backed up that display to bank her second national title four years after her last success.

Putting up a stout defence of her title, Kerry White overcome a strong challenge from Hannah Miller – to take silver some 42 seconds behind Cross – with Miller, the national marathon champion, securing more precious metal with bronze.

Cross (Auckland), who covered the 10km distance in 36:44, said: “It was nice to regain the title, but I didn’t really have any expectation coming in. I just love running, I run for fun and anything else is a bonus. I was surprised by the margin, I wasn’t expecting to win because I was up against the likes of Hannah Miller and a lot of strong runners. When I went to the front (around 2km) I wondered if people would use me as a rabbit, but my plan was just to keep running.

“From then I tried to focus on my race, although I did have people tell me I was 100m ahead, so it did give me the chance to regather myself on the flat and keep maintaining the pace.”

However, a little after the 2km mark, Cross accelerated to the front and from that point the evergreen athlete was unstoppable as she romped to an emphatic success. Possessing enviable strength, she powered up and down the hills of this demanding, technical cross country to add to her other national titles won over 10km on the road and track and over the half-marathon distance.

In a hard-fought battle for silver White (overhauled Miller in the final 2km to take a well-earned silver with Miller completing the podium.

The 17-year-old, who collected U18 silver in last year’s edition, took an early grip of the race and running at a ferocious pace dominated throughout to complete the 8km distance in a time of 25:38 and lead home an Auckland clean sweep of the podium.

Boh Ritchie unleashed a blistering performance over the hills of Spa Thermal Park to claim the national women’s U20 title with a dazzling display of endurance running. Aged just 15, Boh caught and passed her fellow Waikato Bay of Plenty athlete Hannah Gapes around 10 minutes into the race and powered on to an impressive victory in a race with key selection implications ahead of the 2023 World Cross Country Championships in Bathurst, Australia next February.

Ritchie, the national U18 mile champion, took the line honours in 22:16 – a massive 51 seconds clear of Gapes, the silver medallist. Auckland’s Payton Leigh rounded out the podium in 23:49 for bronze.

Catherine Lund was rewarded for a patient and well-judged race to secure the national women’s U18 title by an emphatic margin of 36 seconds.

Refusing to panic when defending champion Bella Earl opened up a 30m lead, Lund, the Otago champion, slowly reeled in the early leader and seized control of the race at halfway. The 16-year-old continued to stretch her advantage crossing the line in 18:21 to bank gold over the 5km distance from the gutsy Earl. Otago also filled the bottom rung of the podium as NZ Secondary schools’ senior girls cross country champion Zara Geddes (19:20) took out the bronze.

Waikato Bay of Plenty secured a noteworthy one-two in the men’s U18 as Matt Hill edged a tight tussle from Louie Endres in an absorbing 6km encounter.

The lead pair broke clear of Aucklander Jamie Mora on a downhill section on the final lap before Hill put the boot in just before ‘Playground Hill’ to open up a decisive lead and bank a nine-second victory in 19:27.

Alfie Steedman added the national U16 cross country to the junior crown he claimed at the national secondary schools’ cross country crown last month courtesy of a powerful surge in the final 1km. The North Harbour athlete was locked in a duel with George Wyllie (Athletics Tauranga) until the long-legged Steedman put on the after burners to power to victory by a 13-second margin in 12:47. Wyllie, the junior bronze medallist at secondary schools champs, went one better to nab the silver with Jack Erikson (Auckland City Athletics) in bronze.

Southland athletes were prominent in the U14 age grade as Max McGregor of Athletics Gore claimed gold in the boys’ race, by a seven-second margin from silver medallist Louay Benaoum (Athletics City Athletics). Abby O’Boyle (St Paul’s Harrier & AA) another Southland athlete also impressed in the girls’ equivalent but she had to concede gold behind Paige Dobson (Napier Harriers), who was an emphatic winner by a 17-second margin.

Sally Gibbs continues to defy the sands of time to clinch overall victory in the women’s masters +35 at the age of 59. The Whanganui Harrier Club athlete – who continues to be rock star on the New Zealand masters’ scene – completed the undulating 6km in a rapid 23:26. Sarah Douglas (Remarkable Runners/Queenstown Athletics) finished second overall in 23:44 to secure the masters 35-39 crown with Karen Donaldson-Brown (Whippets Running Project) placed third in the overall race to take out the 40-44 age division title in 24:09.

The masters men also served up a treat as Oliver O’Sullivan (Hill-City University) battled to victory in a fiercely fought scrap for overall honours from Owairaka’s Simon Mace by a nine-second margin. The Otago-based O’Sullivan made his winning move with around 2.5km remaining to clinch the master 35-39 title in a rapid 27:15 for the 8km distance with the experienced Mace earning the masters 45-49 age grade title. Brian Garmonsway (Trentham United) crossed the line third overall in 27:40 and took out the master 40-44 division.