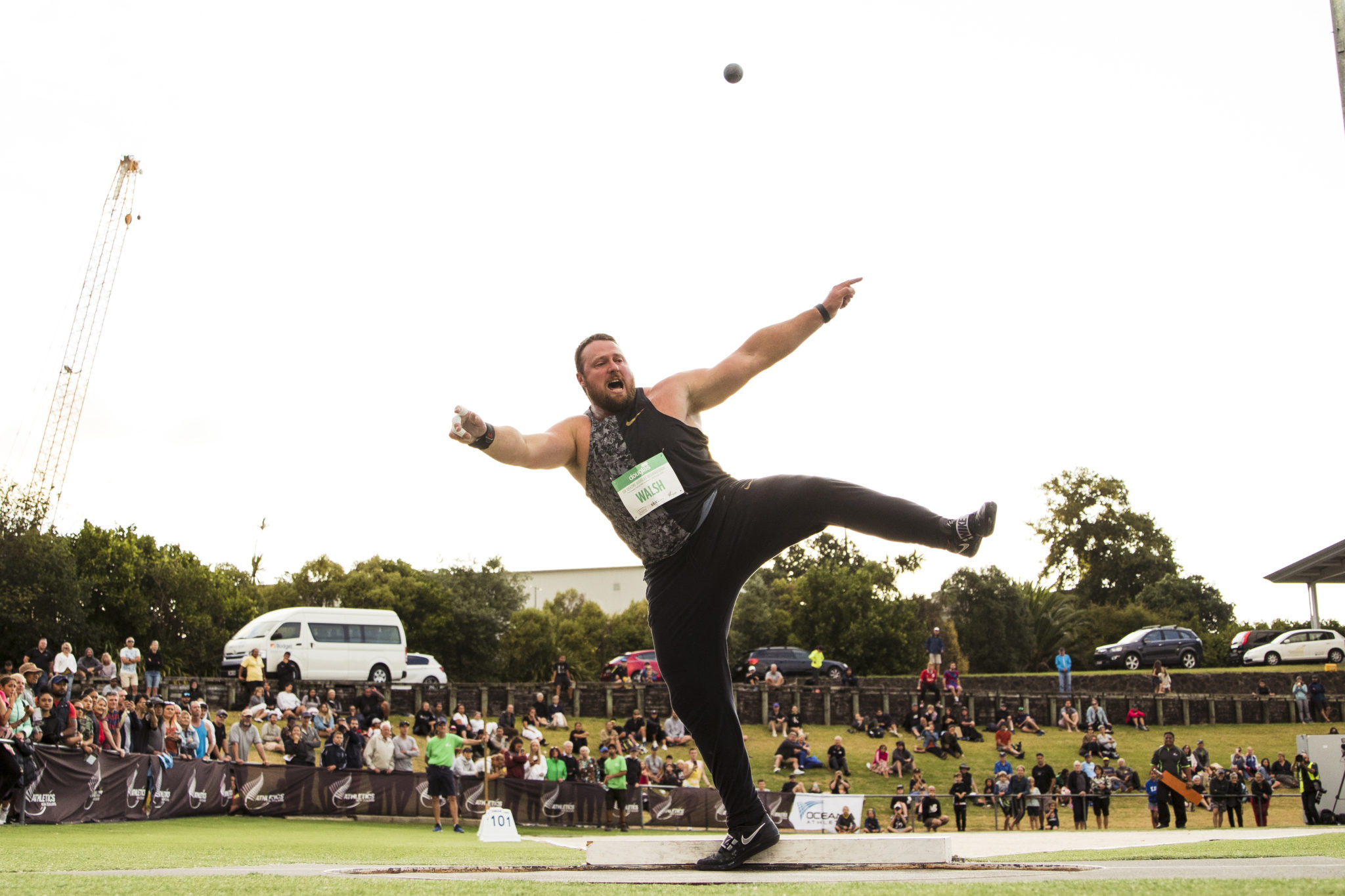 Tom Walsh will be one of many top-class athletes on show at the Sir Graeme Douglas International (Photo: Alisha Lovrich)

The Sir Graeme Douglas International, presented by Harcourts Cooper & Co and now free entry, in Auckland is one of the undoubted highlights of the domestic season. Ahead of Saturday’s meet we pose ten key questions to be answered.

Unquestionably one of the star performers of the 2020/21 track season, Hamish made history last weekend in Wellington by setting a stunning national men’s high jump record of 2.31m and he will hope to add at least 2cm to this mark to secure the automatic standard for Tokyo.

The 24-year-old Christchurch-based athlete came fairly close with all three attempts at 2.33m at Newtown Park to suggest we could again be set for something special at the Trusts Arena.

Should conditions be favourable, Zoe will have a realistic stab at lowering Michelle Seymour’s 28-year-old mark of 11.32.

The North Harbour Bays athlete has been in blistering form this season, clocking a PB of 11.35 in Auckland in January and, in her most recent 100m outing, posting a time of 11.39 into a slight headwind in Hamilton.

A strong crop of young female sprinters led by the likes of Natasha Eady, Georgia Hulls and Symone Tafuna’i will be expected to push Zoe every inch of the way.

Under her new coach Dale Stevenson, double Olympic champion Dame Valerie Adams is unquestionably heading in the right direction, but will that improvement continue?

After launching the shot out to 18.34m in Hastings in January, she added a further 7cm on to this mark in her next competition in Christchurch before advancing her season’s best to 18.68m in Hamilton in her most recent outing.

Now aged 36, she appears to have lost none of her fierce competitive nature and watch out too for world U-20 champion Maddison Wesche, who, with a best of 18.08m this season, will also be a factor.

What shape is Holly Robinson in?

For the best part of a decade the Dunedin-based F46 javelin thrower has proved one of New Zealand’s premier Para athletes. A winner of silver medals at the 2016 Paralympic Games and 2018 Commonwealth Games, as well as at three Para World Athletics Championships, it will be fascinating to see how she is tracking ahead of the Tokyo Paralympics.

The 26-year-old Athletics Taieri thrower boasts a season’s best of 41.85m and would love to improve upon that performance and close in on her PB and national record distance of 45.73m.

Women’s pole vaulting continues to go from strength-to-strength in New Zealand with Olivia and Imogen both making a real mark during the 2020/21 track and field campaign.

The Auckland-based duo have been on fire this season with 20-year-old Imogen soaring out to a PB of 4.50m in November and Olivia equalling her best of 4.50m in Hastings, before adding 5cm to this mark at the Auckland Championships earlier this month.

Last weekend in Wellington, both vaulters successfully negotiated 4.31m with Olivia awarded top spot on countback. The battle between the two in-form training partners will again provide another keenly-anticipated battle.

Not since Brad Mathas at the 2018 Gold Coast Commonwealth Games has a New Zealander recorded a 1:46 800m clocking, but the tall Wellingtonian appears to have all the tools in his arsenal to achieve that feat.

Unbeaten in his two 800m races this season, the 23-year-old claimed an impressive win in Hastings in 1:48.67 before edging Cook Islander Alex Beddoes by 0.01 in a thrilling two-lap battle in 1:47.84 in Hamilton.

Boasting a lifetime best of 1:47.04 from the 2019 season, it is surely just a matter of time before he smashes through the 1:47 barrier. Beddoes will represent his main opposition and look out too for 17-year-old talent James Harding (1:49.18) and Dominic Devlin (1:49.71), who will also expect to feature.

Will Hamish Gill continue to dominate the 400m?

One of the most eye-catching event debuts in recent memory was the performance of Hamish Gill in clocking a winning 400m time of 47.72 at the Porritt Classic earlier this month.

Previously a 100m and 200m specialist, Hamish surprised many with the level of his performance over the one-lap distance and, last weekend in tougher conditions, he once again impressed to take 400m victory in Wellington in 48.92.

Currently the New Zealand number one for the distance, how he performs will make fascinating viewing in what will be only his third ever 400m outing. Leading the opposition will be New Zealand 400m hurdles record-holder Cameron French and national 400m champion Luke Merceica.

Can Camille Buscomb be challenged in the women’s 1500m?

Better known her exploits over 5000m and 10,000m, Camille has had a lot of fun stepping down to the middle-distances during the 2021 domestic campaign.

Winner of the New Zealand mile title in Whanganui in January, two weeks ago on her home track in Hamilton the 30-year-old stormed to 1500m victory over Rebekah Greene, lowering her six-year-old PB to 4:13.47.

Camille will once again be the woman to beat over the metric mile with Rebekah, Katherine Camp, Kara Macdermid and Susannah Lynch among her chief opposition.

Will fast Eddie or tornado Tiaan take out the men’s 100m?

One of the most fascinating rivalries of the season has been the 100m match-ups between good friends and occasional training partners Eddie Osei-Nketia and Tiaan Whelpton.

However, Eddie avenged this defeat in their most recent battle in Hamilton, claiming top spot in 10.28 – his fastest ever legal 100m time in New Zealand – 0.02 clear of 20-year-old Whelpton who wiped a further seven hundredths from his lifetime best.

The battle in West Auckland on Saturday is expected to provide one of the highlights of the track programme.

Back in December at the Auckland Night of 5s meet, Jacko Gill claimed a first win over his New Zealand shot put rival Tom Walsh for nine years. But since that surprise victory, Jacko has turned defeating Tom into a habit, registering a further three wins in Whanganui, Christchurch and Hamilton.

The Auckland-based thrower is clearly in the form of his life. In Christchurch he set a PB of 21.52m and matched this distance to claim top spot in Hamilton.

But Tom is a formidable thrower. A three-time world champion and Commonwealth gold medallist, his last two performances – 21.46m and 21.45m respectively – suggest he is the mood to throw further in Auckland.

Pre-meet and event qualifying starts from 5pm with the main programme at 6pm.

For more information, including the timetable and field lists, please click here