One of the most impressive back stories to the 2022 Jennian Homes New Zealand Track & Field Championships was the success of “Team Green” who dominated the 400m age group finals in Hastings.

Among the West Auckland-based group’s success at Mitre 10 Park included national U20 400m crowns for Lex Revell-Lewis and Mia Powell an U18 400m title for Amelie Fairclough plus U20 400m silver for Troy Middleton and an U18 400m bronze medal for Joe Berman.

It was a remarkable accomplishment for a training group headed by Nuree Greenhalgh – but even more so when we consider the Waitakere AC coach only has three years of coaching experience behind her.

Nuree’s athletics association began at the age of ten shortly after joining Waitakere AC (then known as Waitemata AC). A talented 400m and 800m runner she first came under the coaching guidance of 1966 Commonwealth Games decathlon champion Roy Williams and was later coached by Gary Henley-Smith. She went on to win national age group medals, competed at the Pacific Schools Games and medalled in the 800m at the 1994 Oceania Championships in Auckland.

Yet despite her athletics potential at the age of 20 she walked away from the sport to support her husband – James Greenhalgh – who at the time was a professional tennis player.

“I travelled for two years in 1999 and 2000 on the tennis tour with James. It was crazy times. James had just broken into the top 100 in the world (for doubles rankings) and I was able to travel to big events. The first tournament I went to – The Hong Kong Open – he played in the doubles final where he was up against Andre Agassi.” 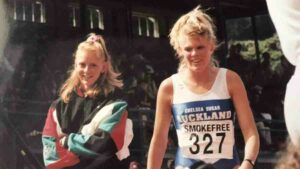 The couple later started a family and returned to New Zealand. Nuree gave birth to daughters – Hayley and Sophie – now aged in their teens and she became a super busy mum.

Her daughters embraced a whole range of activities and sports, but it was only after re-engaging with athletics through her daughter Hayley, who had joined Waitakere AC, did a random opportunity to start coaching come about.

“It was three years ago when Lex’s (Revell-Lewis) mum asked me to coach him,” says Nuree, who explains that Lex’s mother was aware of her background as a 400m athlete. “I had been watching Lex train because Hayley was doing the high jump and I saw that he had a lot of potential. But my first thoughts on being asked to coach him was, I have no more time to give, I don’t know how I am going to do this?”

Yet casting her mind back to her career and thankful and grateful for the huge contribution her coaches played on her career – Nuree was eager to repay the debt.

“When Judy’s request came from nowhere, I just thought it was the universe telling me I start on this coaching journey,” she recalls.

Having never previously coached, Nuree wisely sought advice from Gary Henley-Smith – whom she describes as an “amazing mentor.”

“I’ll talk things through with him and every now and then I’ll flick through my training programmes to him and ask him what do you think? He’ll say, ‘I think you need a 600m time trial in here or a lighter week there’. He taught me how to taper an athlete, he guided me through everything. Then as I felt more confident he took some steps back, but I still know he is there for me should I need him.”

During that first winter her training group expanded to include Mia Powell and Amelie Fairclough while she also reached out to the likes of Athletics NZ sprints and relays lead coach James Mortimer for further advice and support. She has incorporated a lot of the work inspired by Angus Ross on spinal engine strength programme and hopes to develop this even more in the future.

Working full-time as a primary school teacher at Western Heights School in Henderson – she has transferred many of the skills she has learned in education profession to her coaching.

“As a teacher we continually reflect on our teaching, we are also evaluating and learning to do new things. I’ve met some amazing people on the way in my coaching journey and three years down the track I’m like a sponge trying to soak up new ideas.

“My philosophy with all my athletes is about preservation and about preparing them to reach their potential in their early to mid-20s. For me is it about having fun, not working the kids too hard and for them to feel happy and included in a family environment during training. I’m always very available, and if any of my athletes need to talk, I’m here. I like to be a positive role model in their lives.”

The group has further ballooned to include Troy and Joe and others such as promising 400m sprinter Kahu Cotterill, New Zealand U18 300m hurdles bronze medallist Maddie Kelso-Heap and 15-year-old 11.03 100m sprinter Kadin Taylor.

Consistent success has been maintained with three members of “Team Green” earning podium finishes at the 2022 Australian Championships with Mia winning U20 400m silver and bronze medals snared by Amelie (U18 400m) and Lex (U20 400m) in Sydney.

After enjoying so much success in her fledgling coaching career, the question is what next for the 47-year-old mum-of-two?

“I’m hooked! I just love coaching and helping them with their journey. I am very competitive, I like to win but I also love the outdoors, kids and athletics, so it ticks all those boxes.”

“I can’t wait to be at the track on those hot summer days, and I also enjoy the fresh air in the winter after being cooped up inside all day.

“In the short team I’m preparing Lex and Mia for the World U20s and Maddie for the Oceania Championships, but my ultimate goal is I would love to get my kids to compete at an Olympic Games.”

However, given her relatively late start as a coach does she regret not beginning her coaching journey a little earlier in life?

“I honestly don’t think I would have been able earlier in my life and I was glad to spend all time with my kids while they are growing up. They (Nuree’s kids) often joke that mum doesn’t love me anymore because all I talk about is my athletes. But my life plan has gone perfectly and now I have much more time to devote to athletics.”