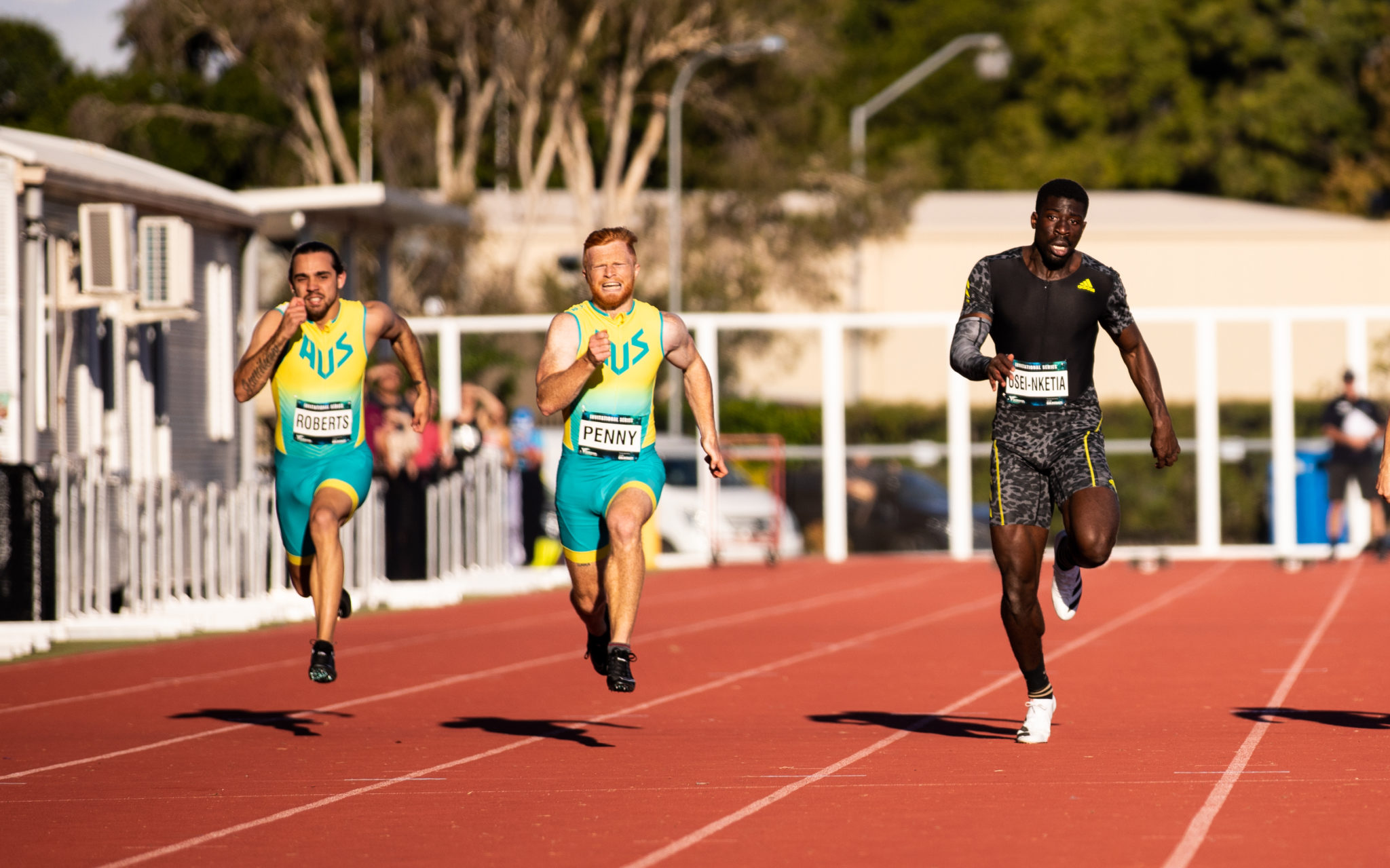 Twenty-year-old sprinter Eddie Osei-Nketia will be looking to repeat his win on the Gold Coast in the second Oceania Invitational (Photo: Casey Simms)

The throwers and sprinters take centre stage for New Zealand at the Oceania Invitational 2 on Friday/Saturday – the second meet in the Athletics New Zealand High Performance Gold Coast Tour – which is proudly supported by the City of Gold Coast.

A handful of events take place on Friday (noon NZ time) at the Queensland Sports and Athletics Centre in Brisbane, including the men’s discus, which features Tokyo Olympic selected discus thrower Connor Bell.

The bulk of the action at the Oceania Invitational 2 will take place in a jam-packed programme on Saturday (starts 3pm NZ time), where among the leading Kiwi athletes on show will be Tokyo-bound shot putter Maddison-Lee Wesche – who at last week’s opening Oceania Invitational added 8cm to her two-year-old PB with an impressive 18.40m throw.

The 2018 World U20 champion will be lifted by her performance, and she will looking for another confidence-boosting display at the Gold Coast Performance Centre, where she faces a field containing New Zealand U20 champion Kaia Tupu-South.

Also performing in the shot circle is Lisa Adams – the reigning world shot put F37 champion and world record-holder – who last weekend in the opening Oceania Invitational extended her world leading distance in the F37 discus with a best of 30.00m.

The 30-year-old Rotorua-based athlete will be looking for a good display in her speciality event. Adams posted a season’s best effort of 15.49m in January, within 1cm of her world record set in Hastings last September.

Among the other Kiwi throwers looking to make their mark on the Gold Coast will be Tori Peeters, who has been conditionally selected for the Tokyo Olympic Games. The New Zealand record-holder needs to throw one mark beyond 62m or two throws over 61.50m to stamp her ticket for Tokyo, and last week at the opening Oceania Invitational she fell short with a best of 56.99m. However, the 27-year-old Waikato-based javelinist has another opportunity to impress this weekend when she faces Commonwealth champion Kathryn Mitchell, who triumphed in last Saturday’s competition, and her fellow Australian and world champion Kelsey-Lee Barber.

New Zealand’s two most pre-eminent sprinters – Eddie Osei-Nketia and Zoe Hobbs – both impressed on the Gold Coast last weekend and the pair return this weekend seeking to further build on impressive performances.

Osei-Nketia clinched an impressive 100m victory by just 0.02 in a handy 10.26 (+1.8m/s) from Jake Penny, and the 20-year-old Kiwi will once again face the Australian in what promises to be a mouth-watering showdown.

Meanwhile, last week, Hobbs recorded a time of 11.31 to place second to the red-hot Australian champion Hana Basic (11.14). While Hobbs’ mark was 0.01 under the national 100m record she jointly holds with Michelle Seymour, a wind measurement slightly above the allowable limit (+2.4m/s) precluded the mark as a record.

Nonetheless, the 23-year-old Taranaki-raised sprinter is clearly in fine fettle and it will be interesting to see how she fares in her re-match with the flying Basic.

In the men’s 800m Kiwi trio James Preston, Brad Mathas and James Harding return to compete over the two-lap distance. Last week, in a two-lap race in which Aussie Peter Bol triumphed in a blistering Tokyo entry standard time, New Zealand champion James Preston set the second fastest 800m time of his career to finish second and 0.23 clear of eight-time national 800m gold medallist Mathas in third. Harding, 17, came within 0.18 of his lifetime best to place fourth in 1:49.13. The New Zealand trio will once again face the challenge of the in-form Bol.

The two Oceania Invitational events see U23 athletes eligible to score points for the team. Each athlete’s competition performance will be converted to points via the World Athletics scoring tables. The points will then be combined and divided by the number of athletes competing from each country to decide the winner.

In a busy few days of action for New Zealand athletes, Tom Walsh will aim to further build on his encouraging recent form at the Diamond League in Florence on Friday morning (5.45am NZ time).

In late-May, the 29-year-old Kiwi clinched victory at the Doha Diamond League and at his most recent appearance on Monday morning (NZ time) in Nashville, Tennessee, he secured his longest throw since the 2019 World Athletics Championships with a 22.00m effort to climb to fifth on the World Lists.

The performance was a much-needed confidence boost for the three-time world champion, who struggled to find his very best form during the domestic summer season.

In Florence he will face a step up in quality and a strong European challenge led by Poland’s world number four Michal Haratyk. Also competing are Croatian record-holder Filip Mihaljevic (21.94m) and Serbian Armin Sinancevic (21.88m).

Note, Diamond League rules for the horizontal jumps and throws operate under a new format called The Final 3. This means the three athletes with the longest throws/jumps during the qualifying stage of the competition meet in a final where all the previous results will be cleared as they compete for first, second and third place.

Olympic bronze medallist Eliza McCartney is expected to line up in the second of three specially arranged Pole Vault competitions organised at AUT Millennium on Auckland’s North Shore on Saturday afternoon from 1:30pm.

The aim of the events is to provide competition to achieve a Tokyo Olympic Games entry standard height of 4.70m. McCartney, who finished third in the first meet with a best clearance of 4.20m, will take on training partners Olivia McTaggart and Imogen Ayris. McTaggart won last week’s competition on countback from Ayris with a best of 4.35m.

Commonwealth 20km race walk silver medallist Alana Barber will attempt to achieve the Olympic Games entry standard of 1:31:00 for the 20km race walk at the International Race Walking Festival in Alytus, Lithuania on Saturday morning NZ time. Last weekend at the World Athletics Race Walking Challenge event in La Coruna, Spain, Barber finished 14th in a time of 1:33:49. The 33-year-old Aucklander has a lifetime best of 1:31:32 dating from 2018.

Note, time is ticking for New Zealand athletes seeking to gain an entry standard for the Tokyo Olympic Games. The extension deadline expires on Tuesday June 22.