Top talent comes together for return of International Track Meet 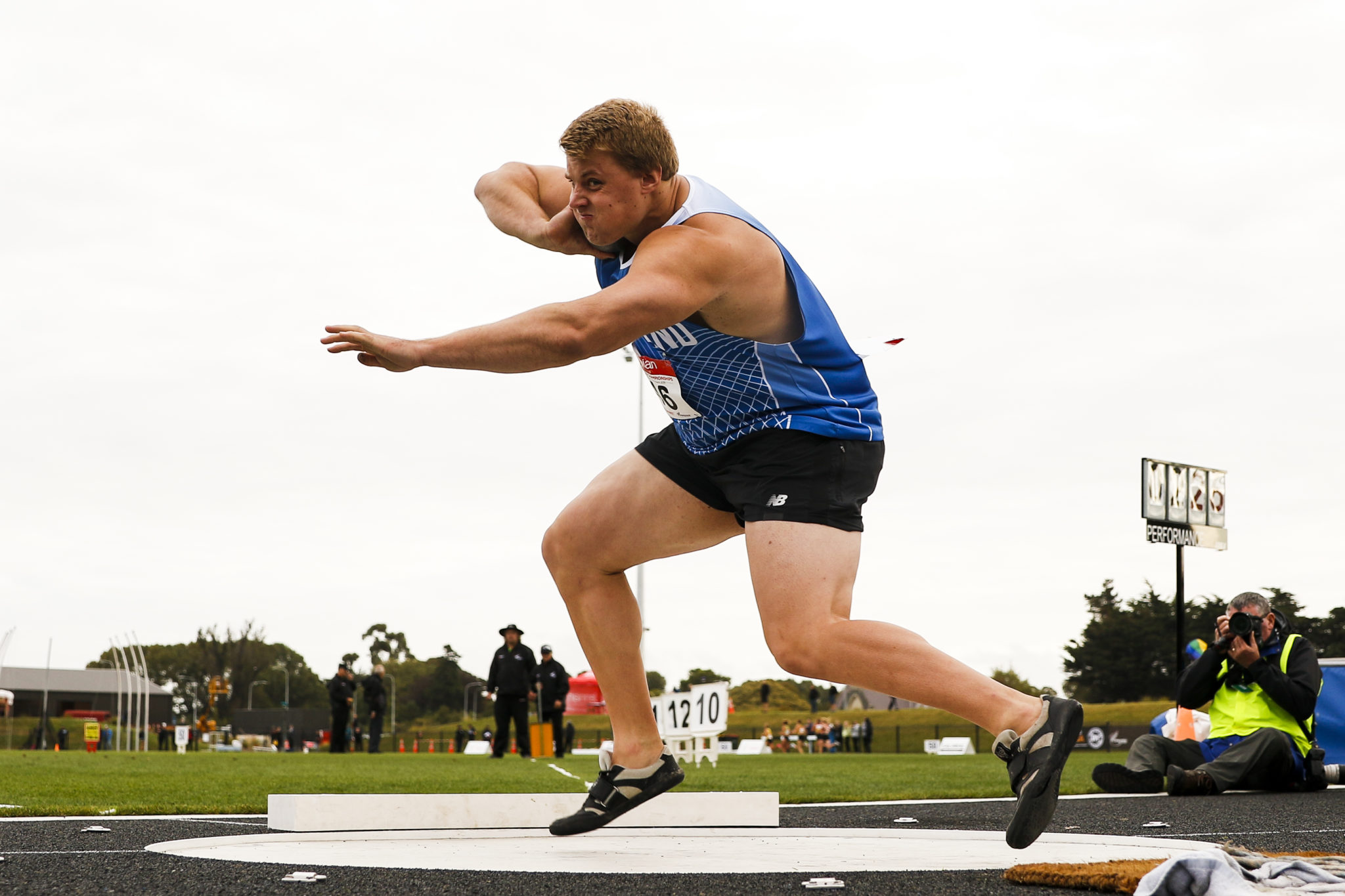 Jacko Gill will be looking to make it three wins in a row over Tom Walsh at the International Track Meet in Christchurch (Photo: Alisha Lovrich)

There will be no shortage of top-class talent when the International Track Meet makes it long-awaited return ‘One Decade On’ on Saturday in Christchurch, marking ten years since the 2011 event was lost to the tragic earthquakes that rocked the region.

With this year’s edition being granted Bronze level status on the World Athletics Continental Tour, the meeting at Nga Puna Wai will bring together some of the best athletes in the country, all of whom will be competing for world ranking points.

“We’re extremely proud of the inclusivity and quality offered by our event,” director Paul Coughlan says.

“Since it began in 2009, we’ve always tried to be innovative about showcasing as many top-class athletes as possible, in addition to our developing future stars. We have nearly all of New Zealand’s best athletes competing at our anniversary re-launch meet, with the added incentive and status of world ranking points for major event qualification,” he adds.

“Ideally, we’d like to do what we normally do and bring in some offshore talent to push our athletes on to greater performances. But, in the current international climate, we have to work with what we have and we’re very lucky to have some top-class internationals right here in New Zealand, ready to put on a show.”

A massive feature of the meeting will be the showdown between Walsh and Gill, who will again go head-to-head after facing each other twice in recent weeks.

Walsh, bronze medallist at the Rio Olympics and a three-time world champion, will have a point to prove after being beaten by Gill on both of those occasions. The Aucklander triumphed over Walsh for the first time since 2011 at the Night of 5s in his home city just before Christmas and repeated the trick last weekend at the Cooks Classic in Whanganui.

Cantabrian Walsh struggled to find his usual rhythm a week ago and mustered a best of 20.78m, which Gill bettered with a stadium record of 21.11m to underline his current streak of hot form.

Also in the shot put, there will also be much interest in the showing of Dame Valerie Adams, especially as she is now in some ways a local favourite after making the difficult decision to split her time between Auckland and Christchurch, where she is coached by Dale Stevenson, last year. The double Olympic champion spends three out of four weeks down south, while husband Gabriel Price visits with one of their two children – daughter Kimoana, three, and one-year-old son Kepaleli – every second weekend.

The level of sacrifice required to divide herself between two cities underlines just how seriously the 36-year-old is taking what would be her fifth Olympics campaign. She is on track after winning the Potts Classic in Hastings a fortnight ago with a throw of 18.34m and will be looking to continue to build towards Tokyo at Nga Puna Wai, where she will meet an emerging star who grew up idolising her.

Teenage sensation Tapenisa Havea, just 17-years-old, was originally a sprinter hurdler but has transitioned to shot put and discus in the last two seasons, breaking several Canterbury records in the process. Also an accomplished netballer, she was recently named head girl at St Andrew’s College.

Havea will also compete in the discus and will be joined by Connor Bell, who is in a rich vein of form after breaking the New Zealand resident’s record with a hurl of 64.29m at the recent Potts Classic. The gifted 19-year-old is now edging towards Ian Winchester’s long-standing national record of 65.03m – a mark surely within his reach.

Also in record-breaking mood recently has been Lauren Bruce, who put on another exhibition of hammer excellence last weekend at Cooks Gardens to back up the previous week’s Potts Classic win. With Olympic qualification already in the bag, the Oceania record holder exceeded the previous stadium record with all six of her attempts, twice hurling the hammer beyond 70m with her best at 71.34m.

In the jumps, the presence of Anna Grimaldi brings further star power to proceedings as the Otago athlete, who celebrates her 24th birthday next week, was a gold medallist at the Paralympics in Rio. Grimaldi, who has a personal long jump best of 5.72m and was ranked sixth in New Zealand in 2020 amongst all athletes, will be looking for a qualifying performance to take her to Tokyo later this year.

Joining Grimaldi in looking to qualify for the Olympics is Kerr, striving for the magical mark of 2.33m to book a high-jump ticket to Tokyo. The joint New Zealand record-holder with a best of 2.30m, Kerr bettered his own stadium record at the Cooks Classic with 2.27m but was unsuccessful in his bid to set a new national record at 2.31m.

On the track, the appearance of Eddie Osei-Nketia and Tiaan Whelpton will have athletics fans in the Garden City buzzing with excitement. Osei-Nketia, the current Oceania 100m champion and son of national 100m record holder Gus Nketia, was a convincing winner of both the 100m and 200m events at last year’s national championships.

But his reputation as New Zealand’s hottest sprint prospect in a generation is now under threat as South Africa-born Whelpton is emerging as a real talent in his own right. The 20-year-old demonstrated his quality at the recent Potts Classic in Hastings – achieving a personal best of 10.37 seconds in the prelims for the sixth-equal fastest 100m time in New Zealand history.

He then toppled teen prodigy Osei-Nketia in the 100m final with a time of 10.47 sec, raced into a headwind. Osei-Nketia, 19, bounced back in the absence of Whelpton to claim a sprint double at the Cooks Classic in Whanganui last weekend, stopping the clock in 10.54 in the 100m before again triumphing in the 200m to win with 21.22.

Christchurch-based Whelpton, who will be cheered on as the local hero, will face off against Osei-Nketia again in the 200m on Saturday while Commonwealth Games representative Joseph Millar and up-and-coming Aucklander Hamish Gill, who was less than a tenth of a second behind Osei-Nketia in the national 200m final, are also entered in a strong field.

The depth is even greater in the women’s 200m, with the appearance at the meet of New Zealand’s top relay talent necessitating two races in that event. Headlining the race will be multiple national champion and World Championships representative Zoe Hobbs, who will be pushed by her 4x100m teammates from earlier in the programme.

Her nearest challenger is likely to be Natasha Eady, who ran the fastest time in New Zealand in several years with a 23.35s in November, tantalisingly close to International Track Meet record-holder Monique Williams’ resident record of 23.15s. World youth and university rep Georgia Hulls, national secondary schools champion Nadia Evans and Canterbury local Jordyn Blake round out the competition.

The ones to watch in the 400m hurdles are Cameron French and Portia Bing, holders of the men’s and women’s national records respectively.

In the women’s 800m, Camille Buscomb will renew her recent rivalry with Kara Macdermid but the one to beat could be Becky Greene, who sprung a surprise to defeat the favoured Katherine Camp at the Potts Classic with a time of 2:07.39. Running down a distance, Buscomb came third that day but relished the longer format a week later at Cooks Gardens, holding off the challenge of freshly-minted national 3000m champion Macdermid to claim the reinstated New Zealand Mile Championship title.

You can catch all the action from the International Track Meet in Christchurch live on the Sky Sport Next YouTube channel.

For a complimentary programme, including timetable and start lists, please click here