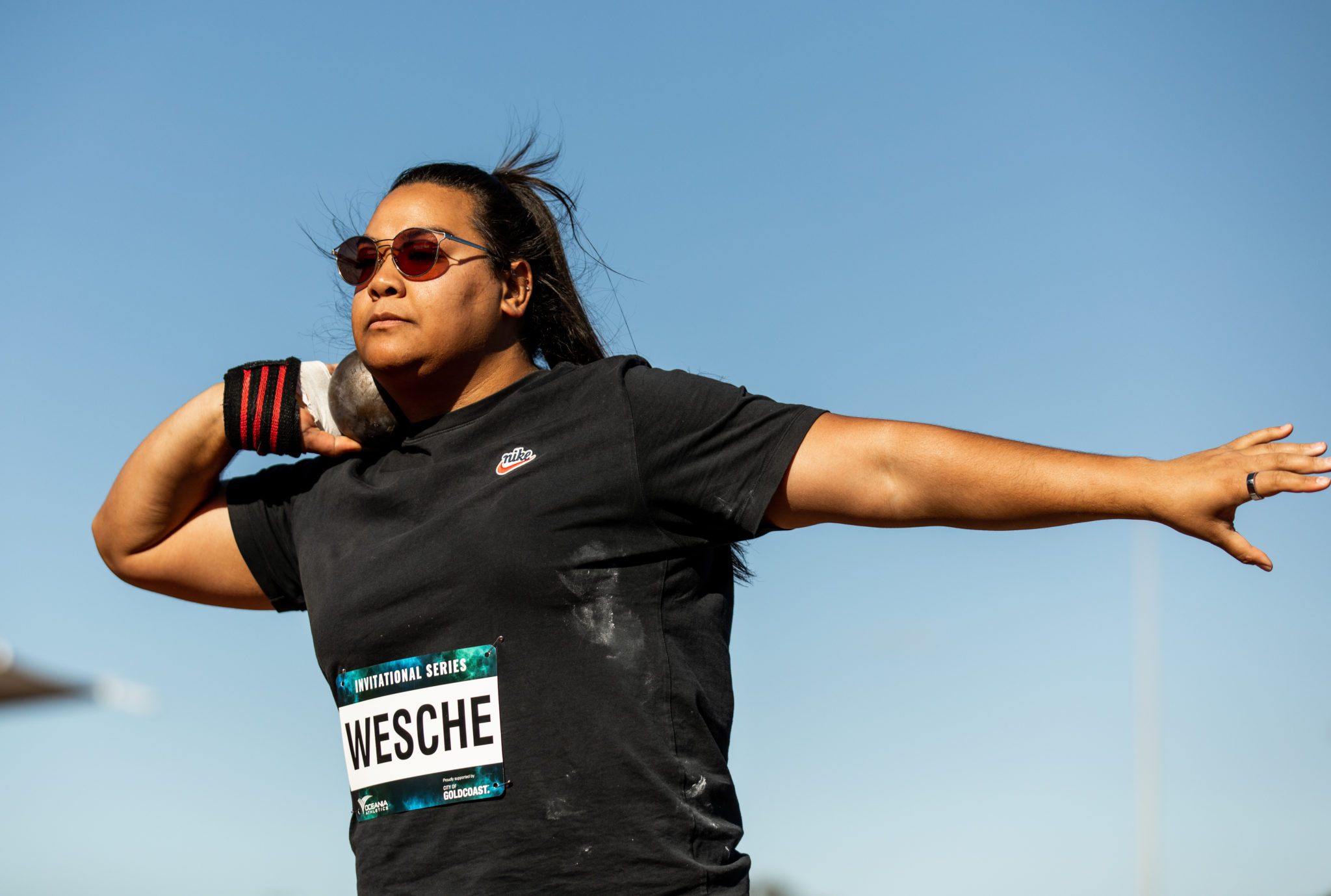 Shot put ace Maddison-Lee Wesche enjoyed a timely boost to her Tokyo Olympic preparations by claiming victory courtesy of a PB of 18.40m at the Oceania Invitational – the first meet in the Athletics New Zealand High Performance Gold Coast Tour – which is proudly supported by the City of Gold Coast.

At a sun-drenched but blustery Gold Coast Performance Centre, the 21-year-old Aucklander hurled the 4kg metal orb to a distance 8cm beyond her previous PB set two years ago at the Sir Graeme Douglas International in her home city.

The 2018 World U20 champion will be lifted by her performance today, and she led home a Kiwi one-two from Kaia Tupu-South (15.09m), the national U20 champion.

Also in fine throwing form was world shot put F37 champion Lisa Adams, who illustrated her versatility by extending her world leading throw in the discus F37 to 30.00m. Competing in the mixed discus throw Para, Adams clad a further 1.05m to her season’s best mark, offering further encouragement ahead of her Tokyo quest.

New Zealand 100m champion Eddie Osei-Nketia gave another demonstration of his sprinting excellence by powering to 100m victory in a slick 10.26 (+1.8m/s).

The Aussie duo Jake Penny and Jack Hale posed a strong challenge to the 20-year-old Kiwi, but Osei-Nketia possessed too much raw speed to edge Penny by 0.02.

Wellington-based Osei-Nketia blasted to a PB of 10.12 in Brisbane in March – just 0.01 shy of the New Zealand 100m record of his father, Gus – and although today he fell short of that time, it was another eye-catching sprinting display.

In a high-class women’s 100m, Zoe Hobbs produced another masterful display of sprinting to place second in 11.31. In a race snared by Aussie champion Hana Basic in a rampaging 11.14, Hobbs dipped 0.01 below the time when matching the national record of Michelle Seymour in Hastings in March.

However, frustratingly for the 23-year-old Kiwi, the mark had a wind-reading of 2.4m/s, just above the allowable limit of 2.0m/s for record purposes.

Tokyo-bound Connor Bell finished top of the pile in the men’s discus, hurling the 2kg implement out to a best of 61.25m

The 19-year-old Aucklander, who set a lifetime best and New Zealand resident record of 64.29m in Hastings in January, will nonetheless be satisfied to notch another win. The 2020 New Zealand champion Alexander Parkinson placed second in 54.24m.

Portia Bing maintained her unbeaten 2021 campaign in the women’s 400m hurdles by crossing the line first in 57.77. Unfortunately, the wind made for challenging conditions and the 2019 New Zealand World Championship representative could not approach her season’s best effort of 55.99.

James Preston was the pick of the strong Kiwi contingent in a high-class men’s 800m. The national champion stopped the clock in a season’s best time 1:47.50 to place second behind Aussie Peter Bol – who rocketed to an Olympic entry standard time of 1:44.88.

Preston’s mark – the second fastest of his career – was enough to finish 0.23 clear of his fellow Kiwi Brad Mathas, with 17-year-old James Harding also impressing to take fourth in 1:49.13 – within 0.18 of his lifetime best.

New Zealand record-holder Tori Peeters, who has been conditionally selected for the Tokyo Olympics, today missed out on her primary objective by placing third with a best throw of 56.99m.

Peeters still needs to hurl the spear beyond 62m or twice beyond 61.50m to confirm her place on the Olympic team but had the consolation of finishing one place ahead of world champion Kelsey-Lee Roberts (54.10m).

Commonwealth champion Kathryn Mitchell of Australia secured top spot in the competition with a best of 61.67m.

New Zealand U20 champion Josie Taylor placed second in the women’s high jump with a best of 1.79m – 4cm down on Aussie Erin Shaw.

The tour comprised a number of athletes who were targeting competing at the World U20 Championships and the World University Games.

A handful of New Zealand Olympic and Paralympic long list members also travelled separately to attend the Oceania Invitational meets to try and qualify, or help prepare for their Tokyo campaigns.

The second Oceania Invitational takes place at the same location on Saturday June 12.