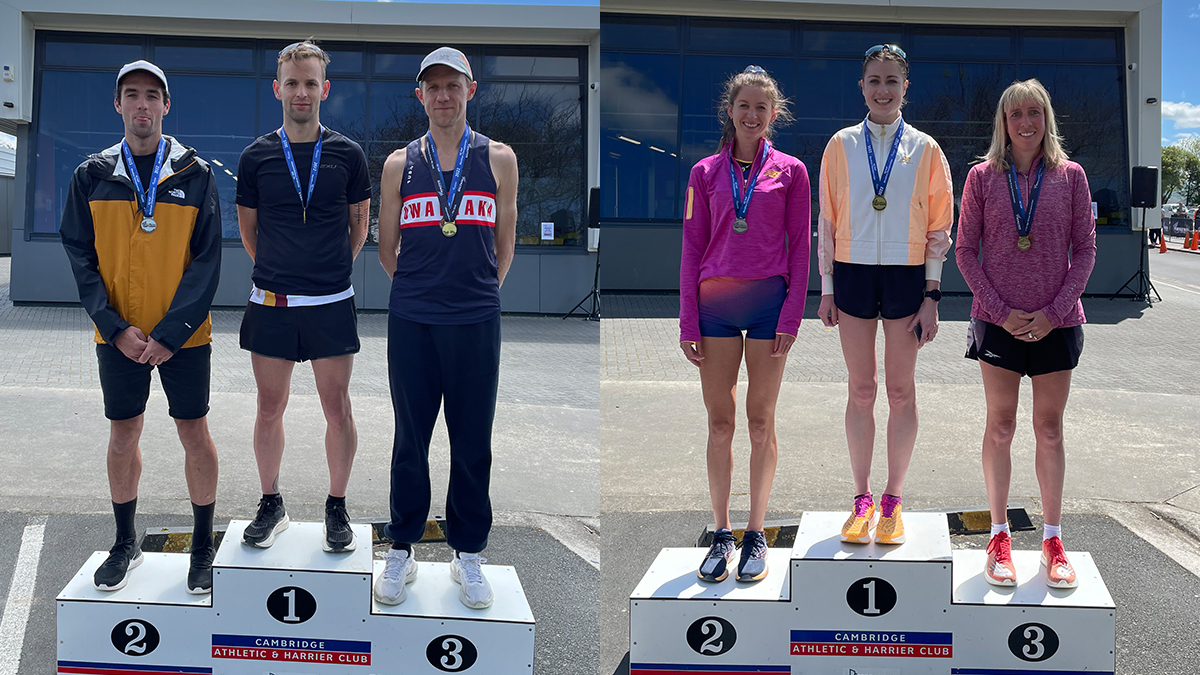 Raced on a demanding hilly course on the out-blocks of Cambridge Inkster-Baynes was in his groove over most of the race after leading into the first section with Michael Voss.

Inkster- Baynes said it was good having Voss in the race coming so soon after his Rotorua marathon victory.

“He definitely knows how to go out hard so we ran that first 3k quite quick.

“At 8k I noticed he was breathing a bit hard and he admitted at the finish he still had the marathon in his legs, so I kept the same tempo and ran away from him in the hills. I wasn’t expecting the hills to be as hilly as they were, but it makes for a bit of an adventure, said Inkster-Baynes.

“With 5k to go it got quite windy and there’s not a lot of shelter on the back roads which made it quite tough.

“I was comfortable through the first 10k in 30:12 and if it had been dead flat I could have continued on and done 64:30 to 65, similar to my Christchurch time from two years ago.

“It’s nice to finish the season with a W after two silvers in the marathon and 10k and a gold in the relays,” he added.

He would like to still aim for the World half marathon championship.

“I was selected for the one in Poland that was cancelled so I’d like to make the team for the championship in Latvia in October next year.”

The hills and the wind were also a challenge for Miller.

“I’m happy to take the win on certainly a more challenging course than I’d anticipated.

“It was good to have those hills in there which made it tough and mixed it in with a variation of the terrain.

“It was good having Kath out there pushing me through and the wind on the way back made it a bit of fun,” said Miller.

She added that it is an honour to take a New Zealand title.

“It is  always a great opportunity to be out here amongst people who love what they doing.

“I’m excited to be back in New Zealand and doing the Kiwi season, not quite the times I’ve been after this year but starting to get my legs back under me and find my rhythm working full time.”

With the aim of making the team to the world cross country championships in Bathurst in February Miller run the 10,000m that Auckland Athletics is putting on at the end of this month and the 10,000m champs in Wellington and later the Night of 5’s.

Sam McCutcheon after a period of three years experiencing trial racing in Europe returned to win his first national title in the Crater Rim 53km event in Christchurch today.

The race was won by Daniele Danesin but as he is not a member of an athletic club McCutcheon in second won the New Zealand trail running championship.

They matched strides over the first half of the race before Danesin got a break and went on to win by five minutes in 4:45:28.

“The course is a lot more relentless than I anticipated. It is constantly up and down and you don’t really get a break which I didn’t really appreciate coming into it.

“Those hills are tough but the day unfolded well, Dani and I were pushing for the first half of the race and after that he got a couple of minutes on me over the next two aid stations.

“I held him on the last bit but didn’t have enough to catch him,” he said.

“Dani is not a member of a Club which is a little bit bitter sweet, but that’s the rules. It’s nice to get the title but not to coming second.

“It was a good hit out today and I just need to recover before we head over to Aussie in a couple of weeks for the Australian Ultra Trail in the Blue Mountains.”

Once clear of the rugby ground and starting point from Diamond Harbour Morgan was on her own racing against the clock.

“I took it steady up the first hill. I had a time in mind as I was trying to beat Nancy Jiang’s winning time of 5:43:38 from two years ago so I had the splits on my hand and I tried to keep up with that.

“I like this sort of distance so I’ll be dialling into a few more of these.

“I’ve got Mission Mt Somers in two weeks’ time followed by the Queenstown marathon and the Kepler again in December,” said Morgan.