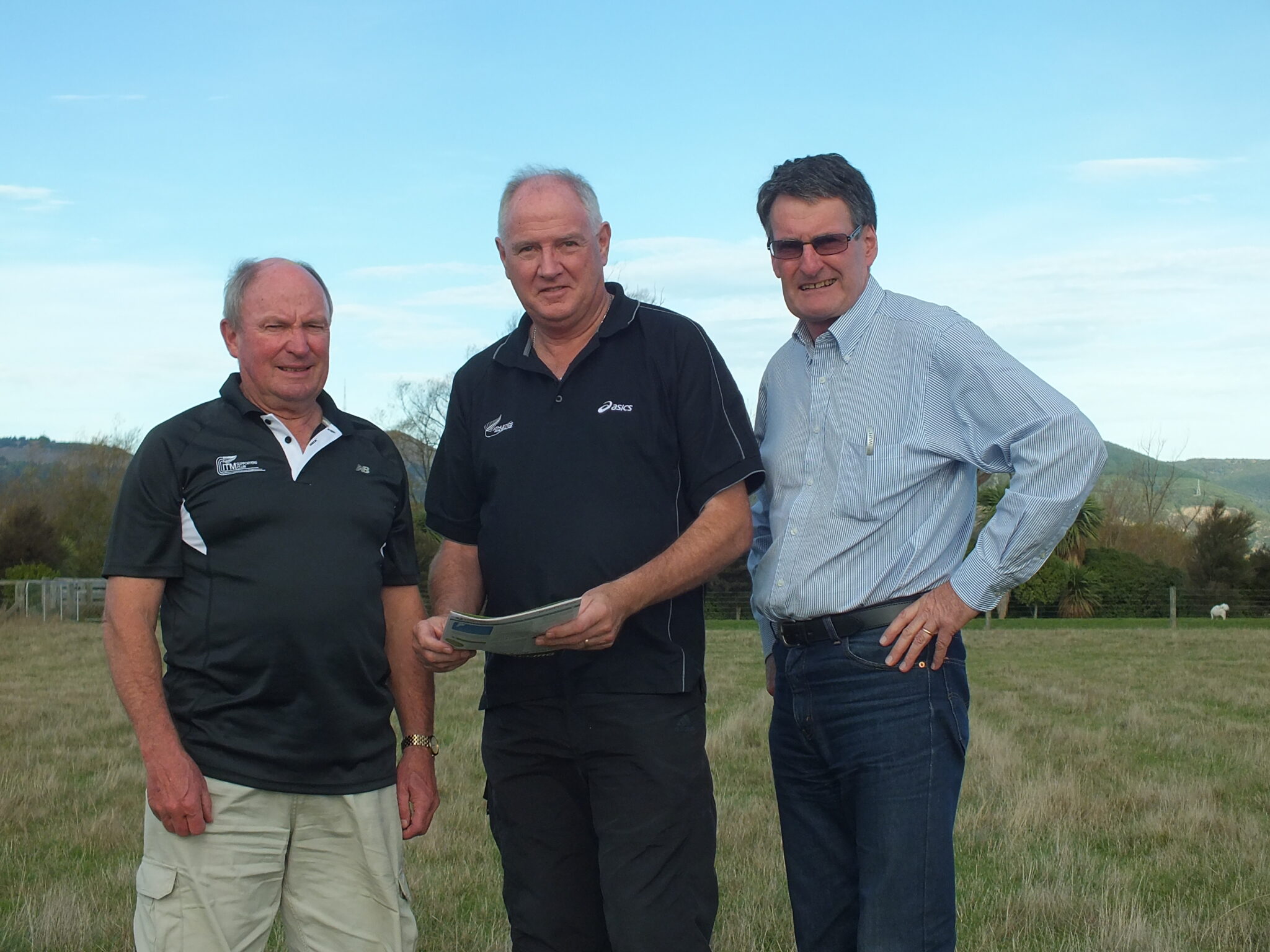 Alan Tucker (right) pictured with Trevor Spittle and John McBrearty - the trio were instrumental in the creation of the Nga Puna Wai facility in Christchurch.

Christchurch-based Alan Tucker was one of three people awarded a life membership at the Athletics NZ AGM earlier this year. Steve Landells chats to the 77-year-old who has enjoyed a rich and fulfilling life associated with the sport for the past six decades.

As an athlete, coach, administrator, official and athletics innovator Alan Tucker has contributed to athletics in a myriad of ways.

The passionate Cantabrian has given and continues to give back to a sport which has given him so much, yet perhaps his greatest accomplishment was his pivotal role in helping set up the state-of-the-art athletics facility in Christchurch as part of the new multi-sports hub at Nga Puna Wai.

Following the demolition of the earthquake-ravaged QEII Stadium in the city, Alan along with Athletics NZ’s Officials Development Manager Trevor Spittle and John McBrearty were the driving forces behind its replacement during the design and planning stages, with Andrew Stark later playing a crucial role in negotiating with the City Council the nuts and bolts (and financial aspects) of being a long-term tenant and user of a council-owned facility.

So after many years of painstaking man hours and countless meetings, when the facility was finally opened for the 2018-19 summer track and field season it was a moment of huge emotion for Alan.

“When I first arrived at the newly opened track, I remember bawling my eyes out,” he admits. “It was such a big moment because the team had put so much work into the project” he adds.

If it was tears of joy that early summer day several years ago, although his very first athletics memory more than 70 years ago precipitated a very different set of tears.

“I raced my dad on the beach at Le Bons Bay on Banks Peninsula,” he says chuckling at the memory.
“My father fully intended to let me win, but he misjudged the finish, and edged me on the line. I was so upset, I cried.”

Yet if his initial running memories evoked tears, this was quickly washed away during his primary school years when he discovered an ability to sprint and jump.

Cricket – the passion of his father – delayed any plans to seriously engage in athletics but as a Year 12 student at Christchurch Boys’ High School his desire could not be resisted any longer and he replaced his cricket shoes for running spikes with his father’s blessing.

“I enjoyed cricket, but I was much better at athletics and that’s why I switched sports,” he says.

He joined Old Boys United AC – with whom he is still a member – and set out on an athletics career which would see him perform principally as a sprinter/decathlete. Alan regularly competed at the National Combined Events Championships, racking up scores in excess of 6000pts as a decathlete. He continued as a masters’ athlete and in 1985 posted a national M35 400m record of 50.7 – a mark which was only erased from the record books last year.

“I was a bit of a jack of all trades and master of none,” says Alan of his athletics career. “I was probably better at the sprints and jumps, and I always used to score most heavily (in decathlon) in the 400m.”

He finally retired from competition at the age of 40 by which point coaching had become a real passion for Alan.

Given his multi-events background he was comfortable coaching most events bar the endurance disciplines, and he enjoyed success guiding Terry Lomax, now coach to Commonwealth men’s high jump champion Hamish Kerr, to New Zealand’s first 7-foot clearance and three senior men’s national high jump titles. Others to come under his guidance included heptathlete Karen Forbes-Henry, who finished ninth in heptathlon for New Zealand at the 1982 Brisbane Commonwealth Games, and Grant Gilbert, who finished seventh in the men’s 400m final at the 1990 Auckland Commonwealth Games.

“It was an enjoyable and challenging time,” he says of his many years as a coach. “I was blessed with some gifted athletes and what thrills me is that two of those three particular athletes have gone on to coach (Lomax and Forbes-Henry),” he says. “Clearly I didn’t put them off coaching as a future activity!”

“For me, administration was a continuation of being an athlete and a coach and seeing the satisfaction in your results,” he explains. “Yes, track and field is an individual sport but the thrill I get – whether as an athlete, coach, administrator or official – is working together with a group of people. I enjoyed that unifying spirit of working on a project where we would all enjoy mutual support.”

In more recent times he has moved into officialdom where he is a qualified Area Technical Official. Meeting the need because of a shortage of officials, Alan once again believes the move was once again a “natural step” and a way of giving back.

“As a long-time competitor, I had a good awareness of the rules, respect for the sport and I also knew the absolutely essential role of officials for allowing the sport to function,” he adds.

Working for 37 years as a Mechanical Engineering lecturer at the University of Canterbury it was natural that he gravitated into the technical side of officiating. He has a particular bond with the field events, and it is through this passion where his scientific brain has been put to good use.

In the early 2000s he designed and built the first Electronic Distance Measurement system to be used for field events in New Zealand and it quickly became a regular measuring instrument used at athletics events in Canterbury and beyond.

“Compared to what we have today it was fairly crude, but it is still very accurate,” he explains. “It didn’t have the built-in software to do the trigonometry calculations that the modern EDM’s have but it is a trusty little unit. We still take it to nationals as a back-up for the more modern measuring equipment.”

More recently, Alan has designed and built a device for quickly checking all the inter-dependent different diameters of a javelin.

“I love designing, I’m from a mechanical engineering background and I like coming up with solutions to practical problems,” explains Alan.

Yet arguably his greatest legacy in the sport is the development of Nga Puna Wai as a replacement for the QEII Stadium. Having retired from full-time work allowed him – along with Trevor and John – more time to work on identifying an alternative Christchurch athletics venue and the trio were initially instrumental in identifying and then developing Rawhiti Domain – the home of New Brighton Olympic AC.

But Rawhiti was only ever seen as a temporary measure with the long-term goal to replace QEII with another Class One World Athletics standard stadium, and so in conjunction with Christchurch City Council, the idea of Nga Puni Wai was born. Working on the new development along with three other sports – rugby league, tennis and hockey – was relatively harmonious, although the road was not without its challenges.

Yet utilising Alan’s engineering background coupled with his extensive athletics knowledge he was entrusted with designing the track lay-out and other facilities at the proposed venue.

“I became extremely familiar with what was then the IAAF (now World Athletics) Track and Field Facilities Manual – the bible for track and field facilities design,” he explains. “I wrote the design specification, which spelt out a lot of the detail of what was required. With QEII gone, New Zealand had lost its only Class One track. The city council then got on board with the Class One approach to Nga Puna Wai – to the point where we’ve got a combo of duplicate pole vault and long jump runways unique within New Zealand which allows the venue to host A and B qualification sessions simultaneously under the same conditions. We also have multiple shot circles. Part of the vision and the concept when we set out was a total layout that included out-of-stadium warm-up facilities for all field events, appropriately located to future-proof for the later addition of a six-lane all-weather warm-up/training track should Christchurch ever be awarded a major international meeting. At the same time, we wanted a facility that would work well for much more routine children’s and senior inter-club meetings; would be easily accessible for training; and attractive for use by schools for their athletics days.”

Now a pivotal part of the track and field landscape in Canterbury, in 2019 and 2020 it hosted the Jennian Homes New Zealand Track & Field Championships and is now firmly established as one of the leading venues in the country.

Aged 77, Alan admits he has slowed down a little in recent times but as long as he continues to derive the same satisfaction and enjoyment out of the sport, he plans to maintain his athletics association – chiefly as an official. He will also continue to tinker with his athletics gadgets and the father-of-two and grandfather-of-five admits being awarded Life Membership of Athletics NZ was “a huge honour.”

“I was flabbergasted when I was told,” he admits. “What surprises me is that I’ve never been associated with or directly worked with Athletics NZ as a body. My athletics contributions have all been outside the immediate Athletics NZ environment. I was blown away to be in that same illustrious company as Dame Valerie Adams and Graham Seatter (who were also awarded Life Memberships in September). I am very humbled.

“But the biggest debt of gratitude is towards my wife, Fay, who at times has been an athletics widow. She has always supported my various athletics roles and I owe her so much for allowing me to do so.”