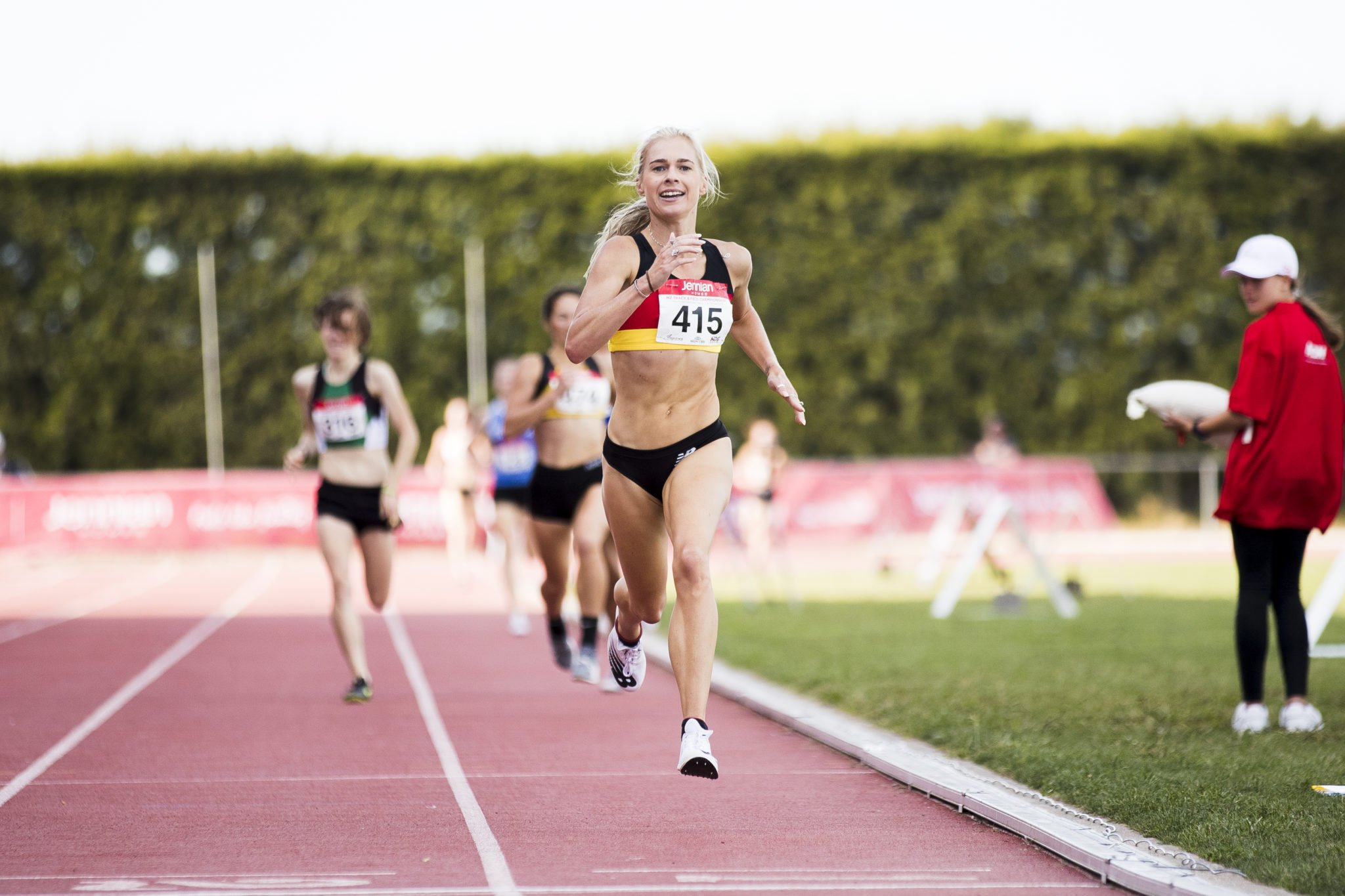 Camille Buscomb wrapped up her energy-sapping quest at the Jennian Homes New Zealand Track and Field Championships in Hastings by securing a richly-deserved gold medal in a thrilling final of the senior women’s 1500m.

In one of the most entertaining races of the two-day championships, Buscomb produced a tactically astute piece of middle-distance running to add the 1500m crown to the 5000m gold and 800m bronze she secured on the opening day at Mitre 10 Park.

Understandably feeling fatigued after her exertions on day one, the Tokyo Olympic-bound 5000m and 10,000m athlete chose a more cautious strategy as 800m gold medallist Katherine Camp took the pace for the first two laps and bore the brunt of the blustery conditions at the front.

With two laps to go, Kara Macdermid, the 2020 silver medallist, burst to the front but by the bell it was Rebekah Greene, the 800m silver medallist, who had hit the front followed by MacDermid, Susannah Lynch with Buscomb (Waikato Bay of Plenty) holding fourth eight metres or so off the pace.

However, Buscomb’s patience was rewarded as she gradually picked off those in front of her and delivered her winning strike around the final bend.

Quickly opening up a clear advantage, she would not be denied what was her maiden national 1500m title having previously snared three national silver and two bronze medals over the metric mile.

“I am feeling very tired today and my goal was to run a hard last 150 and 200m dependent on how the race was going to be played out,” Buscomb explained of her win. “It was so windy and I was so tired, I was worried that if I front-ran like in the 800m and the 5000m I would run out of legs.

“With 450m to go Becky went ahead and I tried to stay there and hopefully come through with her. There was a bit of a gap (between her and Greene) but I didn’t want to use all of my energy right there. I needed to be able to sprint the last 150m – that was goal today. I was able to do this. I was pleased to get that win today. It has been a big couple of days.

Reflecting on her impressive swag of medals over the course of the two days, she said: “I’m definitely most happy with the 1500m. The 800m could have gone either way. I didn’t have a huge expectation to win it but I would have liked to run a PB. I am pleased I did all three races, although this morning I was feeling negative. Once I started I felt okay, I tried to stay relaxed and not put pressure on myself.”

In a slow-run final, Oakley, who last year finished just 0.05 behind Nick Wills in an exhilarating race, this time went one better after controlling the race from the front over the final 500m. Launching his winning assault with 450m to go, he gained a jump on the pursuing Hamish Carson and Eric Speakman and could not be stopped, posting a winning time of 4:01.35 for the gold medal.

Fast-finishing Speakman (Hawkes Bay/Gisborne) could not quite deliver the hometown victory the locals craved, settling for silver a further 0.35 back. Carson, the six-time former national 1500m champion, settled for bronze in 4:02.07.

“It was nice to come here and get the win,” said Oakley, a former World Indoor 3000m finalist who said he had an up-and-down season.

“I’ve not had the season I wanted to, so it was really good to come here and win at the right time. I would have liked it to be fast but that is hard in a championship-style race. I wanted to make sure I was in the first two or three the whole way and planned on going 500m out. Hamish and Eric have a fast finish, so I knew if I had the jump on them it would be an advantage and the aim then was to try and not let them past me.”

Hometown favourite Georgia Hulls (Hawkes Bay/Gisborne) delighted the home spectators to strike gold and defeat defending champion Zoe Hobbs in a memorable senior women’s 200m final. Running with the aid of a +3.7m/s tailwind, Hulls, who is unbeaten over the half-lap distance this season, flashed past the line in 23.21 complete with a beaming smile.

Hobbs, who yesterday equalled the national 100m record on her way to the New Zealand title, recorded 23.73 for silver with Briana Stephenson (Auckland) backing up her long jump silver from yesterday with bronze in 23.86.

Raised in nearby Havelock North, Hulls said: “I’m feeling a bit relived and happy to run on a fast track against fast people. I had a good bend and I tried not to lose my form, which I probably did a little bit. I love running here and all the people here so it was great to be able to win.”

In a field missing several leading names, Bailey Cotton (WBoP) edged silver in a photo finish from Saravee Sos (Wellington) after both athletes were credited with the same time of 22.03.

Aimee Ferguson of Waikato Bay of Plenty battled to the women’s national senior 3000m steeplechase title, the 19-year-old recording 11:25.22 to dethrone 2020 champion Amanda Holyer (Auckland), who had to settle for silver in 12:04.32.

In the field, Anna Thomson matched older brother Scott to be crowned a national triple jump champion as the 25-year-old produced the competition of her life. Four times the Wellington athlete exceeded 13m – twice with jumps beyond the allowable legal wind limit and twice with legal jumps. Her best of 13.06m achieved in the final round added 20cm to her pre-event PB as she secured her fourth national senior triple jump crown.

Boasting 73 years between them, the other medals went to Helena Dinnessen, who added 39cm to her lifetime best with a 12.49m leap, and Sarah Cowley-Ross (12.22m), who added a 17th national senior medal to her highly accomplished career.

Josephine Reeves once again proved the woman with the Midas touch in the senior women’s high jump to claim a hat-trick of national titles. The 20-year-old Wellington athlete enhanced her season’s best by 9cm to secure gold with a third clearance at 1.83m. Two-time former New Zealand champion Keeley O’Hagan edged silver with a 1.79m best on countback from Josie Taylor (Waikato BoP), who was rewarded with bronze.

In a closely-fought three-way battle, Kaia Tupu-South (Auckland) added the national senior discus title to the New Zealand U20 discus and shot put titles she snared yesterday. The talented 18-year-old has been one the emerging stars of the meet and a second round toss of 52.87m earned her a narrow 48cm victory from fellow Aucklander Savannah Scheen. Waikato Bay of Plenty’s Tatiana Kaumoana (52.29m) secured national bronze for a second successive year.

In the women’s U20 200m final, Maia Broughton (Canterbury) denied Tayla Brunger the sprint double by a margin of 0.36, registering a time of 24.21 for a decisive win.

Aucklander James Harding earned an impressive victory in the men’s U20 1500m courtesy of a PB of 3:50.30 to complete the middle-distance double. Will Anthony (Wellington), an eye-catching winner of the men’s U20 5000m yesterday, was also in PB shape for silver in 3:51.01 in a photo-finish from Luke Hitchcock (Auckland).

Max Yanzick (Canterbury) completed a successful national championships by winning the U20 men’s steeplechase title in 9:53.01 to add to the U20 5000m bronze he snared the previous day.