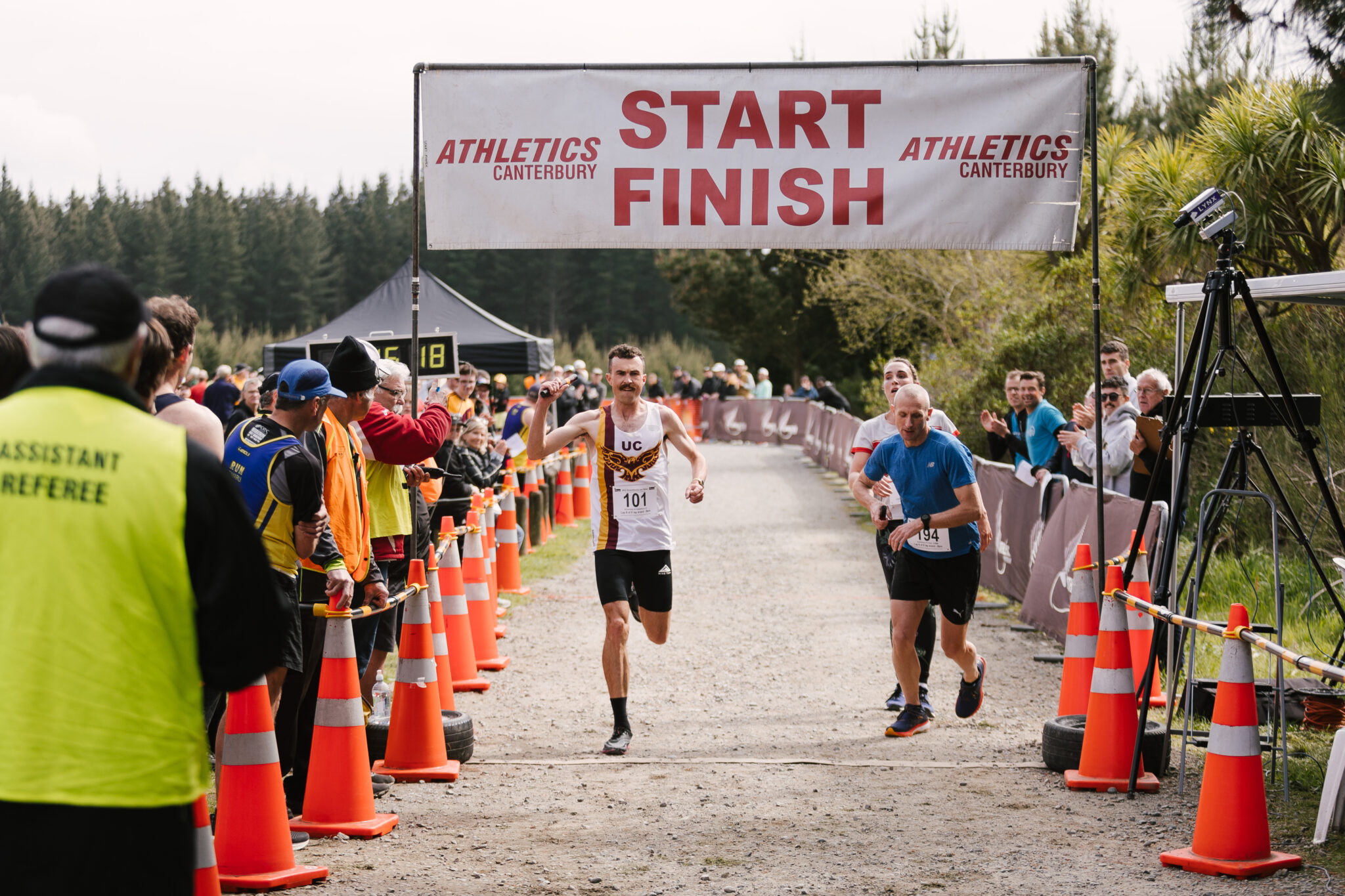 Daniel Balchin anchors the University of Canterbury to victory in the senior men's race at the 2022 New Zealand Road Relay Championships in Christchurch. (Credit: Ethan Gillespie).

Pre-event favourites University of Canterbury AC and North Harbour Bays lived up to their billing to deliver decisive victories and successfully retain their senior men’s and senior women’s titles at the New Zealand Road Relay Championships at Bottle Lake Forest Park in Christchurch.

Inspired by their younger contingent, University of Canterbury romped to a near three-and-a-half minute victory to take the senior men’s title in 3:15:22 from the Auckland-based Whippets Running Project, who grabbed silver (3:18:49). Christchurch Avon finished strongly to round out the podium with the bronze medal in 3:21:38 – 52 seconds clear of Pakuranga AC.

Saxon Morgan of the University of Canterbury ran a rapid 23:33 – the third fastest 8km lap of the day for a senior man – for the opening leg and Chris Dryden (24:09) gave the Christchurch-based club a clear lead at the end of lap two. Youngsters Harry Rattray (25:21), Jack Staples (25:18) and Cam Swales (24:58) performed with huge pride for their team before Tom Moulai (24:21) and experienced duo Oska Inkster-Baynes (23:34) and Dan Balchin (24:09) – the first two finishers from the Reboot Marathon in May – steered their team to a memorable win.

“Jack Staples, Harry Rattray and Cam Swales probably all ran better than we could have hoped for,” explains Oska. “Each of them ran an unreal race and every lap we seemed to extend our lead, which meant all the stalwarts – such as myself – needed to do was to turn up.

“The word we used for the team was trust, and if we trusted in one another it would relieve the pressure. That was our real focus, trust rather than heaping the pressure on the young guys. A couple of them ran 5km PB’s in an 8km race on gravel, which shows me we did a good job on getting the culture right. We wanted to give them a positive experience, so once we are done and dusted as athletes the younger boys can pick up the momentum and teach the next generation.

“If anything, today’s success is even sweeter than it was two years ago. Everyone who wants to be here was here and that is quite a powerful thing.”

North Harbour Bays retained their senior women’s title from 2020 and maintained their pre-eminence over the past decade with a sixth win in the past nine editions of the event.

Boasting a strong arsenal of talent the powerhouse North Shore-based delivered to clinch victory in an overall time around the 8 x 8km route of 3:50:27 – exactly six-and-a-half minutes clear of Whippets. The University of Canterbury snared bronze (4:02:47).

North Harbour Bays thanks to a first lap of 28:41 by Mackenzie Morgan sat second behind Wellington Harriers after lap one but a blistering second lap of 26:50 – fastest in the senior women’s race – by Olivia Whitney seized control of the race for Bays.

It was a lead they would not relinquish as Brigid Dennehy (28:18), Niamh De Hora (29:55) and team captain Laura Nagel (29:30), short of her best following a recent injury, further extended the Auckland team’s advantage.

Maddie Dillon (28:57), Charlotte Floodsmith-Ryan (29:33) for cemented their bid for gold before Jessie Speedy (28:43) lived up to her name to anchor the team to glory.

A strong Whippets team which included a swift anchor leg by Tillie Hollyer (28:35) grabbed silver with Katherine Camp’s rapid (27:54) producing the fastest lap for the bronze medal-winning University of Canterbury.

Laura Nagel said: “We knew we had a strong squad coming in and we’ve been building towards this for a year-and-a-half to two years. For us, road relays are all about coming together and really having fun. It was a team effort, and we support each other and making sure everyone can do their best.

“We knew we were strong, but we had to stay humble because you never know who is going to show up on the day. We have a lot of pride of winning road relays and bringing everyone together and we want to keep that going. Everyone has done a great job, except probably for me (Laura was returned from a recent injury and lengthy overseas trip). It was a real collective effort played out in a great team atmosphere.”

Pakuranga AC followed up their victory at the 2020 edition by successfully defending their title with a comprehensive victory in the junior men’s race. Racing over two 5km loops, followed by two 8km laps and climaxed by a further two 5km laps the Auckland-based club completed the distance in 1:53:54 – more than four minutes clear of silver medallists Trentham Utd (1:58:01). Selwyn (1:59:08) edged a tight tussle by a three-second margin from Hill City – University for bronze.

For Pakuranga, Christian De Vaal (24:50) and Ronan Codyre (25:11) unleashed the first and third quickest 8km legs of the day for a junior man while anchor leg runner Angus Munroe (15:45) was the second fastest 5km runner.

Olympic Harriers proved too strong for the opposition in the junior women’s race, completing the 36km distance in 2:17:41 from silver medallists Auckland City Athletics (2:19:58). Bronze was secured by Wellington Harriers (2:22:59).