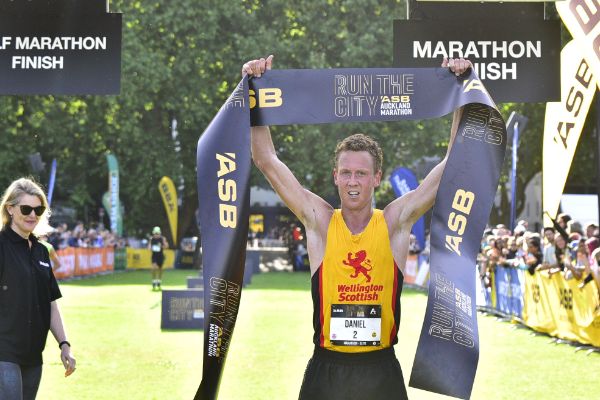 Auckland Marathon winner Daniel Jones has experienced a year he will never forget. Steve Landells chats to the Wellington Scottish endurance runner about his rollercoaster 2020.

To say that 2020 has not gone to the script has been true for so many of us, but especially so Kiwi distance runner Daniel Jones.

When the Wellington-based athlete flew out in early March for a six-week training block in Kenya ahead of a tilt at the Hannover Marathon, he could not have predicted what would happen next.

Spending a couple of weeks in the distance running Mecca of Iten, everything appeared perfect until Covid hit, the global pandemic turning a six-week training camp into a four-month stay.

Being stranded in the east African nation and unable to find a route home proved a hugely frustrating experience. Yet, preferring to view his Kenyan adventure through a positive lens, he shrugged off the inconvenience and following his return to New Zealand last month snared the Auckland Marathon with an impressive performance.

It has been a year out of the ordinary for Daniel but one in which he can be immensely proud.

Born and raised in Whakatane, endurance sport is in Daniel’s blood. His grandfather and nana were former marathon runners while his father, Neil Jones, was a former winner of the prestigious Coast to Coast Longest Day.

With a natural love of the outdoors, it was almost inevitable Daniel would follow suit. In his final year at high school, he finished sixth in the New Zealand Secondary Schools Cross Country Championships and as a junior he represented New Zealand at the World Mountain Running Championships in Switzerland, placing 22nd.

“I never did much track running or any shorter road races during my high school years,” admits Daniel. “I was quite slow, I liked doing the longer races because I was getting better results in them.”

His ability was identified in the US and he took up a scholarship to attend Eastern Kentucky University in 2009. He spent five years in the US, later attending Sam Houston State University in Texas. It was while in the US that his sporting journey was to lurch in a different direction after a friend encouraged Daniel to run a multisport race in China.

Keen to try something new, Daniel enjoyed the experience and on his return to New Zealand he continued to pursue multisport races, excelling on the popular Chinese circuit.

Competing in gruelling four-day races with up to seven hours of racing per day of running, biking and kayaking certainly helped build Daniel’s endurance base and he enjoyed the experience.

“We had some successful years, especially the stage racing in China,” admits Daniel, who took up a role as part of the Corporate Finance Team with PWC in Wellington from 2015.

“I remember we had one amazing season racing in China where I went pretty much unbeaten with my teammate, Alex Hunt from Tasmania.”

The pair also claimed victory in the Red Bull Defiance race in Wanaka but to further develop his running he joined Wellington Scottish, which helped spark a curiosity in the marathon.

“The club has some very strong marathon competitors, so I’m pretty sure that’s where I had the idea of targeting a marathon. I was also lucky to have some good mentors at Scottish with experienced marathon runners such as Nick Horspool and Todd Stevens, who had a real understanding of what it took to run a marathon.”

Training alongside former New Zealand marathon champion Horspool also acted as a huge boost and, such were the improvements made in training, he readjusted his goals several times in the countdown to his marathon debut at the Gold Coast Marathon in July, 2018.

“At first I wanted to break 2:30 then I could see during the the workouts with Nick that I was stronger and I should maybe aim for 2:25 before later 2:20 became a possibility,” he explains.

On the day, Daniel came narrowly close to his goal, running a time of 2:20:06 for a slick marathon debut performance.

Competing on the multisport circuit in China for the month of September, on his return to New Zealand he produced a solid run to place second in the Auckland Marathon, recording 2:24:48 – a quality performance given his lack of specific marathon training.

In November, he added the Queenstown Marathon title before winning the 60km Kepler Challenge – one of New Zealand’s most cherished mountain running prizes.

Bitten by the marathon bug, Daniel was keen on improving  his time in 2019 and sought out the Lake Biwa Marathon in Japan for his next outing.

However, despite posting a new personal best of 2:18:40, the Whakatane Athletics and Harrier Club athlete was far from satisfied with the outcome.

“After winning Kepler I took a few weeks off before getting stuck back into training,” he explains. “The race in Lake Biwa went alright but not amazingly as I was targeting a sub-2:18 time.”

Four months later, he returned to Gold Coast for his next marathon outing and, keen to rectify the disappointment of Lake Biwa, was determined to run faster.

Also with half an eye on the 2019 World Championship qualification mark of 2:16:00, he did not quite hit the jackpot but was still delighted to post a personal best of 2:16:15 to elevate the relatively inexperienced marathon performer to a new level.

“It was my biggest achievement and I felt like I pushed myself to the limit,” he adds.

Fully committed to marathon running in 2020 with the ultimate goal of clinching an Olympic qualification time of 2:11:30, he secured an invite to the Hannover Marathon in Germany which was scheduled for April.

Following a conversation with east African-based New Zealand marathon record-holder Zane Robertson, who encouraged Daniel to train in Kenya, he took up the advice to take up an intended “five-to-six-week” training block in Iten, Kenya from early March.

Initially blown away by the quality training options in the running mecca, he was on track for a top performance in Hannover only for Covid to strike. This forced the cancellation of the Hannover Marathon while the lockdown rules precluded Daniel from running in groups.

With the borders closed, Daniel had little option but to stay  in Kenya but tried to view the situation positively.

“I didn’t realise at that time how severe coronavirus would become,” he explains. “So I decided to stay on and get in some good, consistent training.”

Racking up on average 160km per week and, as restrictions were slowly lifted he could once again train in smaller groups, Daniel hooked up with some Kenyan and overseas athletes for training at the high-altitude base.

However, when he finally looked at wanting to head home to New Zealand he found the path blocked several times.

“I couldn’t get out,” he explains. “I booked a flight with Emirates to fly out from Nairobi to Zurich on to Hong Kong and then New Zealand. I arrived at the airport but they wouldn’t let me on because I didn’t have my booking on the same flight ticket.”

He spent ten days living with a Kiwi family who hail from his home town of Whakatane. He then identified a flight to Egypt but was not allowed on the flight and returned to Iten.

He eventually returned to New Zealand in early July and underwent 14 days of quarantine in an Auckland hotel before heading back to Wellington.

Daniel, who has his own coaching business, considered competing in the Valencia Marathon in Spain in December but concerns he could once again become stranded meant he has fully committed to competing domestically for the remainder of 2020.

In September he set a 10km road personal best of 30:56 to finish third at the Wellington Road Championships before helping Wellington Scottish to bronze at the New Zealand Road Relay Championships in Feilding in preparation for a crack at the Auckland Marathon.

Despite a challenging year, the 30-year-old produced a quality performance in the City of Sails to win by more than a four-and-a-half-minute margin in 2:21:57 for what was his first marathon in 16 months.

“I thought I was in about 2:20 shape but really I just wanted to race again,” he says. “It was super fun to be racing again and I couldn’t wipe the smile off my face for the first 10 to 20km until it started hurting.

“The race had a strong field with the likes of Fabian Downs and Michael Voss, so to win by a big margin was cool. It was also good to come back and win after my second place in 2020.”

Daniel’s next target will be to hit the trails and regain his Kepler Challenge title next month and then enjoy a good stint of training in pursuit of a marathon either in New Zealand or possibly Australia or Japan, depending on the pandemic.

Whatever happens in the future, 2020 is unlikely to be a year he will forget in a hurry after his unexpected four-month adventure in Kenya.