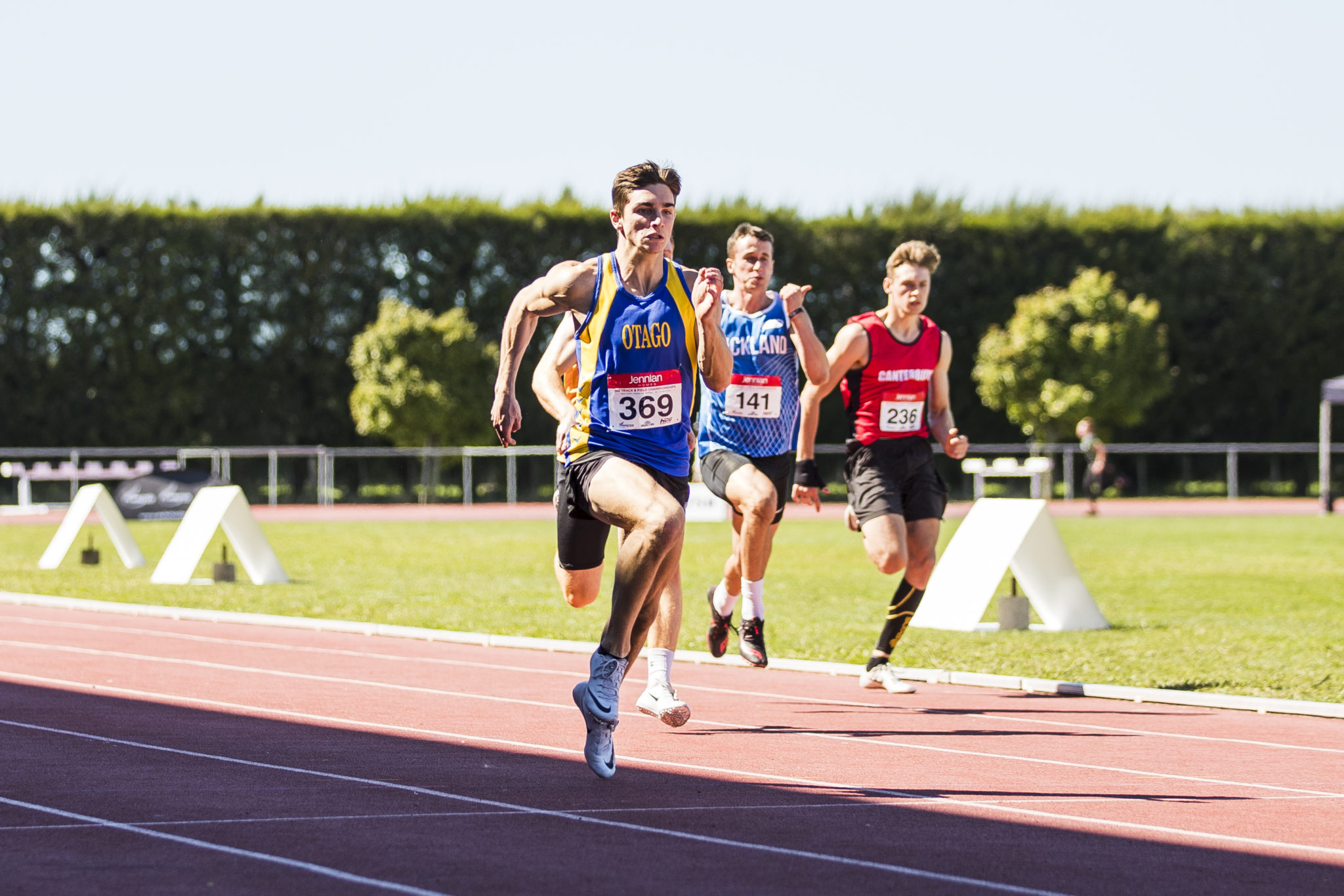 Shay Veitch was one of the star performers at the 2021 Jennian Homes New Zealand Track and Field Championships, striking gold in the senior men’s 100m, long jump and 4x400m. Steve Landells chatted to the 20-year-old Otago-based athlete to find out more about his rapidly developing athletics journey.

Shay Veitch is a man full of surprises.

From taking out the men’s senior 100m and long jump double in a period of a little over two hours, to spending a large chunk of his early career self-coached and showing a certain streak of independence by living on his own while his parents live overseas, Shay’s story is far from orthodox.

Yet perhaps this is the secret to the versatile Dunedin athlete’s success and helps explain why the 20-year-old emerged as one of the most exciting young talents in the country at last month’s New Zealand Track and Field Championships in Hastings.

Born and raised in Cambridge, Shay relocated with his parents, who are both teachers, to live in Thailand for three-and-a-half years before he and his family moved on to Shanghai for the next five-and-a-half years.

Football was his main sport growing up but, after returning home to settle in Dunedin as a Year 11 student at John McGlashan School, the direction of his sporting life was to change after he was introduced to athletics.

“I remember as a Year 11 student jumping 5.30m (in the long jump) but I didn’t do too much other athletics, passed it off and continued to play football,” Shay explains. “But in Year 12 I jumped that summer a few times, put in a bit more gym work and managed to jump 6.12m at Otago Schools.”

It was a performance which encouraged Shay he could develop as a jumper and he started to train more seriously. He joined Ariki Athletics and Harrier Club but, self-coached, he adopted some training methods which he says were probably not the most advisable.

“I was looking at YouTube videos and tried to mimic what the pros were doing,” he recalls. “In hindsight I shouldn’t have been trying to copy jumpers who were jumping two metres further than me. My technique was criminally sub-par.”

Despite his perceived technical deficiencies, Shay emerged as an athlete of class and enviable temperament by striking gold at the 2018 New Zealand Secondary School Championships in his home city of Dunedin.

“I’m not afraid of saying I probably shouldn’t have won there,” he adds modestly. “A lot of the other boys had been jumping further than me. I was pretty high on adrenaline as it was my first big meet and I think that is what it took me out to that extra half a metre.”

Shay went into 2019 with some fresh goals. With Shay on anchor, his school finished sixth in the 2018 senior boys 4x400m final at the Secondary Schools Champs and he was determined the team could perform better.

He adjusted his training to combine long jump with sprints and he took the task seriously. Still self-coached, he trained up to 10 sessions a week and with impressive maturity cleaned up his diet by cutting out refined sugars and consumed a heavy daily load of vegetables.

“I left no stone unturned in terms of my preparation,” he says.

In terms of his single-minded pursuit of excellence, he studied various training programmes and even borrowed a session carried out by former world 400m record-holder and 1996 and 2000 Olympic one-lap champion Michael Johnson.

“He did a 400m workout split into three sets,” Shay explains. “It was a 300m followed by a one-minute break and then a 100m sprint. I would then have a six-minute break before completing the second set and so on. It was pretty tough and I was probably doing way more than I should have done.”

Whatever the methodology or logic behind the sessions, it worked. At the 2019 New Zealand Secondary Schools Championships in Wellington, Shay completed a memorable long jump, 400m and 4x400m treble.

Competing in atrocious conditions at Newtown Park, Shay leapt 6.92m to retain his senior boys’ long jump title and carved more than half-a-second from his PB to run 47.52 to strike 400m gold – a performance which was good enough to rank the then 18-year-old second in the 2019 New Zealand rankings for the one-lap distance.

Yet his personal highlight from the championships arrived in the 4x400m as he anchored John McGlashan College to victory by just 0.05 from Kings College.

“It was pretty overwhelming emotion (to win all three golds), having worked all the way through winter to achieve those goals,” he says.

His rich and exciting promise was readily apparent and several weeks later he received an email from experienced coach Michael Beable – the man who had guided a raft of top athletes, including Roger Te Puni to 11 national high jump titles and Jessica Penney to fifth at the 2006 World U-20 Championships.

Within the contents of the email, Wanaka-based Michael offered his coaching services – which proved an irresistible prospect to Shay.

The pair connected in early 2020 with Shay occasionally travelling to Wanaka to meet with Michael for training and coach reciprocating the act in Dunedin.

For the most part, the coach-athlete relationship works remotely with many jump sessions videoed via Shay’s mobile phone which is often resting upright against a water bottle.

Leading into big meets, the pair will talk daily and there is little doubting the relationship has been a big success.

“He’s been around for a very long time and has so much experience,” Shay explains. “That experience and his understanding of the sport means he knows how different athletes respond to the training. We are happy to work with each other.”

Shay admits from his time as a self-coached athlete he had picked up so many technical bad habits he underwent a steep learning curve under Michael’s guidance. One major fault he needed to fix was that he planted his take-off foot too far in front of him, which resulted in lost momentum.

Despite having worked for just two months together, at the 2020 New Zealand Track and Field Championships the then 19-year-old earned long jump bronze with a PB of 7.38m and banked 400m silver in 48.25 – doing so complete with a spectacular dive across the line.

Happy to come away from the event with a pair of senior medals, he admits his finish line efforts were not so unusual for an anxious athlete in such a heightened state of fatigue.

“I misjudged the pace and got slammed by the wind with 150m to go,” he explains. “Then when some of the most experienced runners came back I just kind of freaked out. It is a weird thing that can happen when you are tired. I’ve seen it happen at even the highest international level, which makes me feel better.”

The rise of the pandemic and lockdown quickly followed, although as his parents had a “decent home gym set up”, he was not badly inconvenienced by the enforced period at home.

Then in October his parents, John and Anita, left New Zealand to relocate to Vietnam to take up teaching positions.

More recently, Shay’s elder brother has also left the family home where the New Zealand 100m and long jump champion now resides solo. Yet it is not something the Otago athlete is overly fazed about.

“My parents fortunately brought me up to be very independent, so it is not like I’ve been thrown in the deep end, he explains. “They’ve always done a very good job at keeping us in line and been super supportive of my athletics.”

In November, Shay gave a hint to his form and fitness by jumping a PB of 7.66m in Christchurch and offered further evidence of his exciting versatility by winning the South Island Combined Events Championships in Dunedin – in what was his third decathlon that year – with a handy total score of 6540pts.

While the multi-events experiment went well, the big range in the points differential between jumps and sprints compared to the throws means he is happy to focus on long jump and sprints for now.

However, just when it seemed he was set to sparkle for the summer campaign, his preparations suffered a jolt when he picked up a hamstring injury in December which sidelined him for six weeks.

It was a frustrating period for Shay but, ably supported by Michael and physio Margie Campbell, on his competitive return at the Porritt Classic in mid-February he was pleasantly surprised to win the long jump with a best of 7.63m – within 0.03 of his lifetime best at that time – and finish third in the 200m in 21.68. 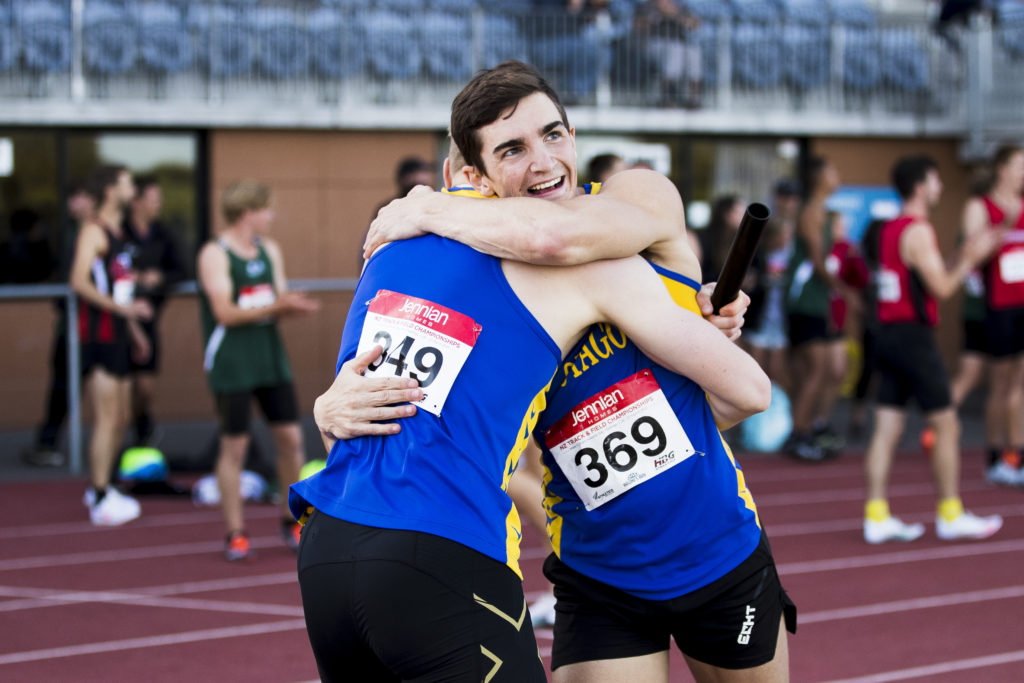 Hopeful of a positive showing at nationals, he was then given a further boost following its three-week postponement because of a Covid outbreak.

“Those three weeks were pretty important for me in terms of tidying things up,” admits Shay, who says he was not fit enough following the injury to target either the 200m or 400m. “My first priority was to win the long jump. I’d been jumping 7.60m plus, although for the 100m the aim was to pick up a medal of any colour.”

But his ambitions in the 100m sprint were to alter following the withdrawal from the meet of big-hitters Eddie Osei-Nketia (competing in Australia) and Tiaan Whelpton and Joseph Millar through injury.

Going into the 100m he felt confident and composed.

“I don’t think I’ve felt that calm before a race,” explains Shay, who studies biomed at the University of Otago. “All I was thinking was to push hard, listen to the gun and stay relaxed.”

Calmness clearly worked as he powered out of the blocks and on to victory in 10.34 – aided by a strong tailwind of +3.8m/s.

The following day, his perfect nationals was complete as he helped Otago defeat Auckland by half-a-second in the men’s 4x400m final.

“It was a special weekend. I’ve worked day in and day out for the last few years and, while it may seem like every season is a breakthrough, in reality it is a gradual improvement. My goal now is to keep progressing.”

Believing his main quality is his work ethic, Shay has some big goals for the future. Winning a spot in the long jump team for the 2022 Commonwealth Games is on his radar while he also hopes to approach the eight-metre mark and he understandably has half-an-eye on Bob Thomas’ 53-year-old national long jump record of 8.05m.

Given the ability the gifted young athlete has already shown, this is a more than feasible target for a man who has developed an overwhelming devotion to his craft.

“I love every inch of it,” he says of track and field.

This passion, coupled with his ability, could prove a winning combination in the years to come.