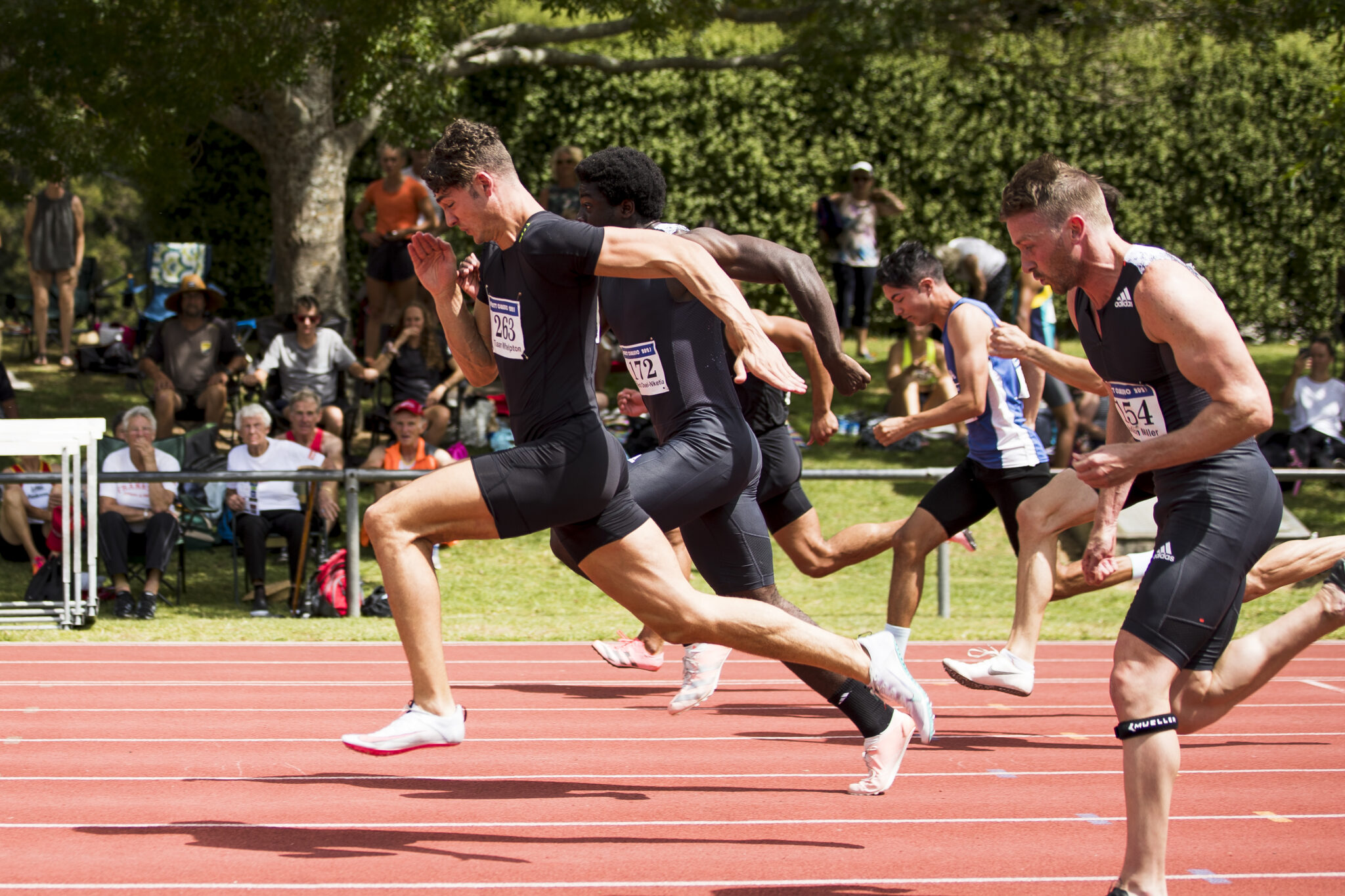 A controversial opinion but I quite like Ngā Puna Wai. It may be windy, basically all the time, but at least the 100m/200m can be swapped around to ensure a tailwind. The track is also decently fast and conveniently located four minutes from my house.

My coach told me that sprinters are like cheetahs, in the sense they move really fast for brief periods of time and then spend the rest of the day lying down. However, that’s okay because they’re physiologically inclined to exert huge amounts of energy and force very quickly, so its natural for them to get tired quickly too.  This is great, as it justifies why I do half warm-up laps.

I personally love the weights sessions in the gym. Nothing is quite as satisfying as pulling off a heavy lift or smashing a PB in the gym. It makes you feel mentally and physically huge.

I’m a big fan of Israel Adesanya who’s a fellow New Zealander and MMA superstar. In my own sport however, I’d have to give the cliché answer and say Usain Bolt.

The 2019 Rugby World Cup Final was a spectacle to see. Seeing the Springboks absolutely destroy the English, who were deemed the favourites, brought me immense joy.

ANZ rankings is absolutely amazing. I spend way too much time on it checking times, stalking athletes and even using it to check peoples birthdays when I inevitably forget them. Shout out to those behind the site, it’s incredibly useful and intuitive. When the website goes down, I genuinely have a panic.

Back in primary school, being the fastest kid in class was a big flex. Major respect points were given to the kid who could run the fastest (usually me) and this allowed me to move up the social hierarchy because everyone wants the fast kid on their team when we played games outside.

Rosie Elliott seems to be the only other person in my squad who deals with pre-comp stress by talking nonstop and laughing a lot, so we get along well because I’m usually the same. Apologies to Anna Percy who much prefers peace and quite and often has to put up with our antics.

Old School hip-hop tends to get me in the zone, but sometimes I’m after something more up beat to get me hyped for a race and then I’ll head towards drum and bass.

If my stomach allows me to eat pre comp, I usually try to eat a banana but if I’m honest I much prefer some lollies (don’t tell my coach) or some caffeine.

I’m massively into F1, I follow the sport very closely and love to watch the races. Other than that, I’m a big rugby fan as that was my main sport before athletics. These days however I enjoy playing table tennis, and I reckon no one in athletics in New Zealand could beat me (except occasionally Marcus Wolton when he gets lucky!).

My go to at home is usually plain old vanilla, but I’m a big fan of more adventurous flavours too and you can often find me at Rollickin (A gelato café in Christchurch) trying out their different flavours of the week.

Bing Bong – if you know, you know

Fav toy as a child

I really liked Hot Wheels, and that’s probably what sparked my love for cars from a young age. I still have a few of them too.

I generally enjoy playing whatever game my friends are playing, but in my own time I really enjoyed the Tomb Raider series and The Witcher 3.

Even though I support the Springboks, its hard to argue that the All Blacks aren’t the greatest team of all time.

The people here are really cool, everyone is super nice, welcoming, and supportive. I’ve met a lot of great people here so far. Other than that, I’d say the country’s natural beauty is unrivalled, and its tectonic setting means its one of the best places in the world to study in my field (Geosciences)

I quite like photography/videography so often enjoy taking photos and videos of myself and other people and editing them, however I don’t share much of these as its more just for fun. I’m responsible for most of the training footage coming out of the training squad and even had a camera drone up until recently when it was claimed by a light pole over at Ngā Puna Wai. Rest in pieces….