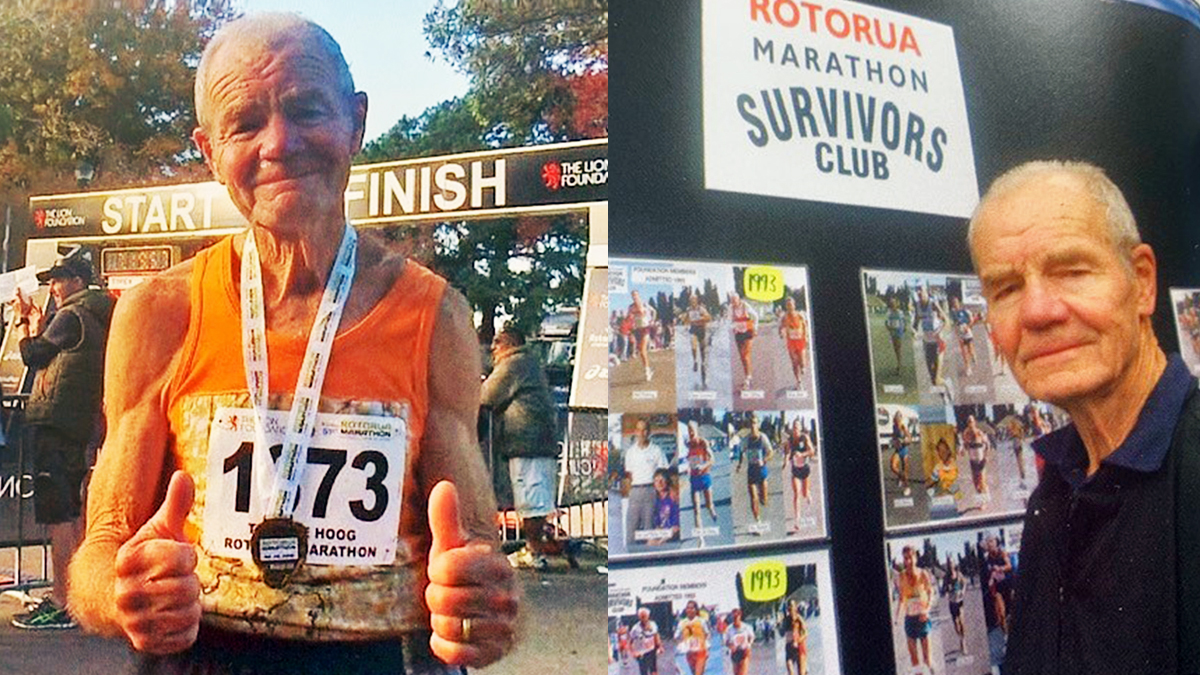 The 86-year-old West Aucklander has been a regular of the event since the late-1970s and he hopes to complete the impressive milestone before signing off from the marathon which has given him so much.

Born in Indonesia to Dutch parents, as a child Theo spent three-and-a-half years living in a concentration camp run by the Japanese Army during the Second World War. His brother and brother-in-law died during his time the camp and he shudders at the memory of the experience.

“It was a really bad time,” he explains. I don’t think the guards really regarded us as humans and if the war had lasted another six or nine months, I don’t think I would have survived. The conditions were bad, but the hunger was far worst. All we had to eat every day, if we were lucky, was two bowls of watery soup. That little bowl and that small spoon were the two most important things in your life.”

At the end of the Second World War, Theo made his way back to the Netherlands where he completed his schooling but after his brother decided to leave for New Zealand at the age of 19 he decided to follow in his footsteps to start his new life.
A keen sportsman, Theo joined the Auckland Rowing Club and competed for 20 years. While he loved life at the club in the winter to keep fit he started running and a new passion was born.

“I got hooked and I just love the feeling running gave me.”

During the 1970s he started to run marathons before deciding to enter his first Rotorua Marathon in 1977.

“I saw the race advertised, we loved visiting Rotorua as a tourist centre and I also liked the fact the race started and ended at the same point,” adds the grandfather of five.

He completed his debut Rotorua Marathon in around four hours, however as he recalls it was not a mind-blowing experience.
“It was quite a shock and far worse than I thought,” admits Henderson-based Theo. ‘It is not a flat course, it is quite hilly.
Despite this he was determined to come back and better his time and for the past four decades he has consistently returned time and time again.

He set his course record of 3:19 in 1992 and although his time has gradually slowed over time, he says the race still holds a special appeal.

“It is such a scenic spot, and the city always gets behind the event,’ he adds. “The crowd cheers you the whole way around.”
Ticking off the milestones over the years, the retired TV repairman admits a recent bout of shingles has compromised his training – which typically takes place around a 5km loop of Waikumete Cemetery in West Auckland every Sunday morning.

Nonetheless, despite the far from prefect preparation he will once again make the familiar trip from Auckland down to Rotorua to compete in his 40th edition of the historic marathon – where his son-in-law David Nicholson will also take to the start line.
Hoping to complete the 42.2km distance in around eight-and-a-half hours, Theo insists this year will form the 40th and final chapter of his Rotorua Marathon journey.

“This will be my last year my body is just in great shape anymore,” he adds. “On entering I got number 89, and I was thinking whoever got number 86 I should swap with them. It has been a long journey and one I am proud of.”