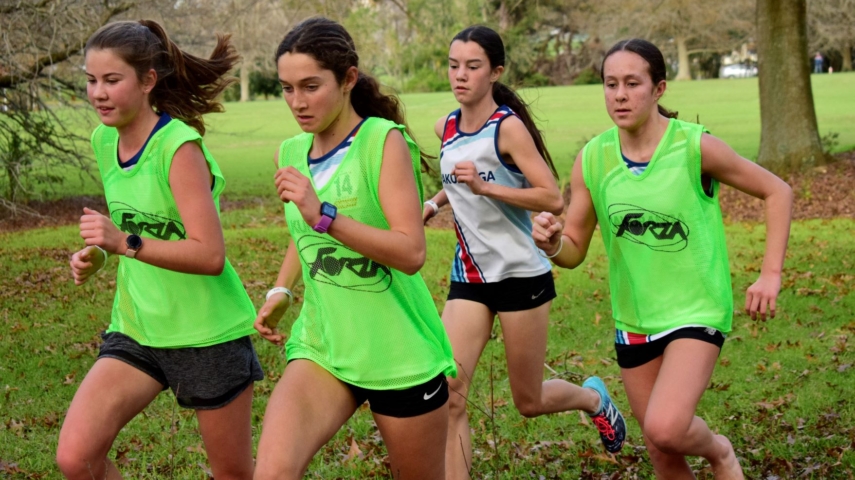 Pakuranga AC is one of New Zealand’s largest and most prestigious clubs. We chat to Junior Cross Country/Road Chairperson Rebecca Findlay to find out more about how they navigated lockdown and how the section is thriving under alert level 1.

During the course of the season – which runs from April to September – weekly training nights take place on Wednesdays with the option for more regular and prescribed training for the more serious youngsters.

Yet the Covid-19 pandemic and decision in late-March for New Zealand to go into full lockdown, naturally had a significant impact on Pakuranga AC’s plans for the 2020 winter season.

“Just prior to lockdown we had planned some open days (for the new season), which we obviously decided not to go ahead with,” admits Rebecca, whose two daughters – Claire, 12, and Fleur, 9, run for the club. “But during full lockdown we kept engaged with members through email and our Facebook page to encourage them to continue running safely within the guidelines.”

Many of the older children in the section opted to compete in the Athletics NZ Virtual race series. Meanwhile, the club also ran a photo and video competition – the theme of which was what you most loved about lockdown.

“Many people were feeling quite lost during that time,” explains Rebecca. “So it was nice to try and keep some of the normal connections ongoing and keep them engaged.”

After receiving many positive messages from families during alert level 4 and 3, the club reacted quickly to the loosening of the restrictions as soon as the country hit alert level 2.

With groups of ten allowed to gather, Pakuranga AC put in place club coaching groups of nine children and one coach.

As soon as groups of up to 100 people were allowed to meet, this gave the green light for some club competitions to re-start.

“Our first event was a pairs race of athletes on Queen’s Birthday Weekend (in which two athletes run in opposite directions around a cross country course, meet, and then turn around and run back to the start), which I believe attracted around 37 athletes and including parents we had around 60 in total,” explains Rebecca. “The following weekend we ran a mixed-age relay which had 99 kids and parents there on the day.

“During this period the club were great at setting up a clear framework for putting all the guidelines in place. We were lucky in that parents were very helpful. Parents of the older children would drop their child off for the races but would not stick around to watch, so as to limit numbers and enable us to keep within the guidelines.”

As soon as the country hit alert level one it was business as usual for Pakuranga AC. On June 13 the East Auckland club organised a time trial event at Lloyd Elsmore Park, which attracted more than 80 kids – a number which would have been significantly higher had the junior section not loaned out 27 U18 runners for a senior event that day.

Numbers have slowly returned. Despite the delayed start to the season the club still has around 120 members as part of its junior cross country/road section and for Rebecca, the key is to make the experience as relevant and engaging as possible for all the kids – who are aged from four to 18.

“We obviously want to make sure the distances work for everyone,” she explains. “We don’t want to push our little ones too far but we are also aware our older runners want to get in a decent distance. For our younger ones the distance is never more than 1 km and can be as simple as running to the tree and back.

“On our club course the different ages run in different coloured bibs, so they can easily identify their friends. We are also conscious to provide a range of events. For example, last weekend Auckland Centre had an event in Long Bay (on Auckland’s North Shore). We were aware not everyone would want to travel or they may not be that competitive so they would rather have a fun event at the club, which we organised.”

Club cross country events have a strong social element. Post-race hot chips and drinks are available for all and spot prizes are run via a random draw.

Rebecca has been impressed with how quickly membership in the junior cross country/road section has “bounced back” following lockdown and she whole-heartedly supports cross country as an attractive option for kids.

“For me, cross country is not about the kids performing to a high level, it is simply about everyone being involved in a way that they still feel comfortable – even if they are the last one home.

“I love the fact the kids are still outdoors and active, even though sometimes the weather is not quite so amenable. I enjoy the family atmosphere of cross country and how everyone is out there supporting one another regardless of age or ability.”