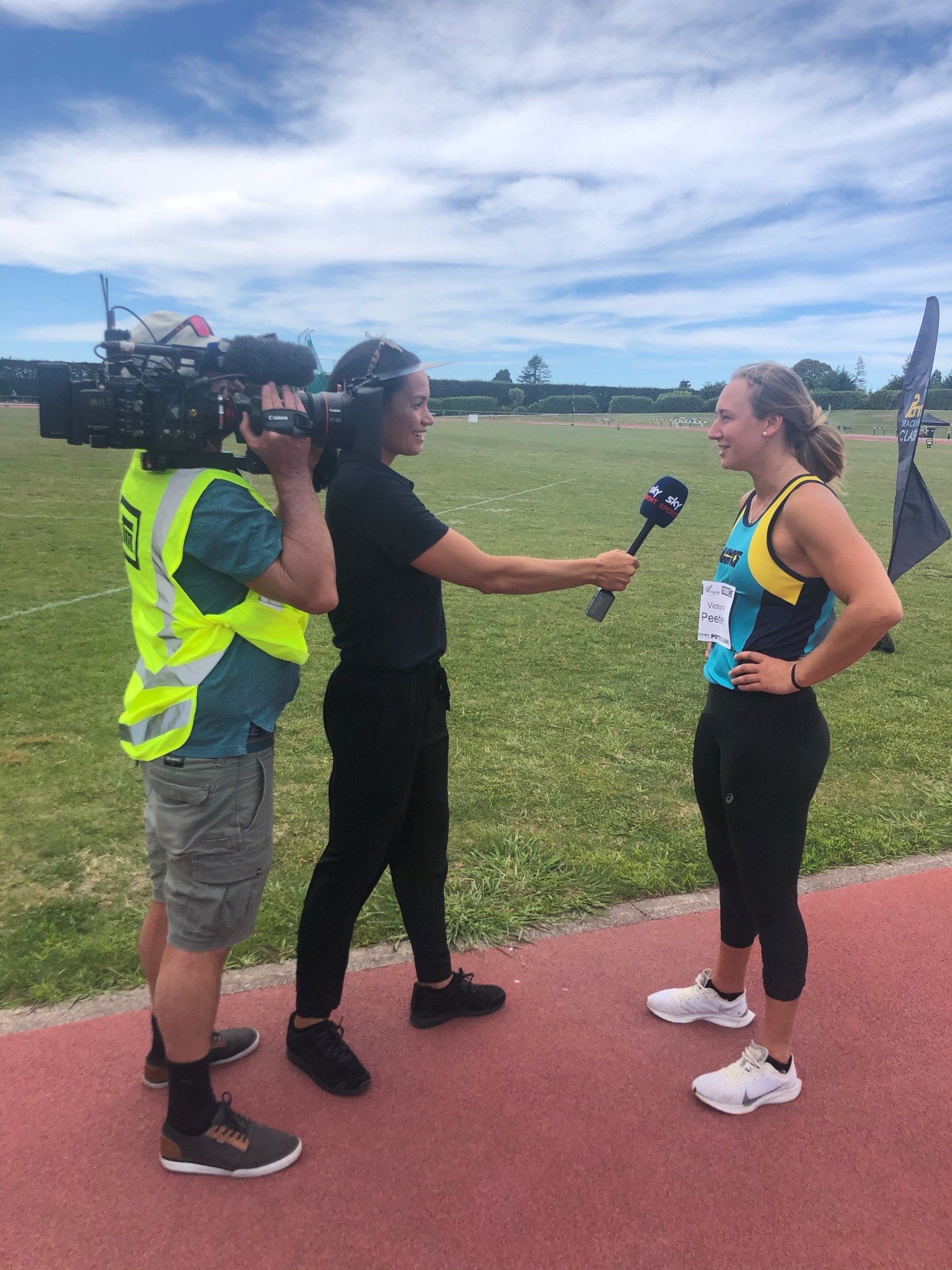 How and why did you first become involved in commentary?

SC: I have always been interested in the media and I have a communications degree. It all started at either the Auckland Championships or Porritt Classic when I was asked to do the post-race interviews. I think Murray McKinnon was away that day and I was asked to fill in, partly because I was a multi-eventer and I knew so many events. I was still an athlete at that time, and it has grown from there. I have loved the livestream commentary work of the past few years. It is such a critical product for our sport in helping build the fan base and we should always be thinking about ways we can do it better.

What are the advantages of being an ex-athlete and commentator?

Because of my multi-events background I understand a range of events and I’m also aware of when an athlete has done a great performance but also why they would be happy with it. Adding these insights hopefully adds value.  Secondly, because I’ve been on the other side of the microphone myself, I know what kind of questions will provoke good answers and ones which won’t annoy the athletes. We want athletes to be themselves and that’s when we get the best responses.

Are there any broadcasters you really admire?

I’ve learned a lot from Nigel Yalden (regular Athletics NZ livestream commentator). He has been very helpful to me and at times he has taken me under his wing. I have loved working with him. Rikki Swannell is just a phenomenal trailblazer in women’s sport. When I was an athlete, I did some work experience with her at Radio Sport. I was fortunate at the Olympics to work alongside Toni Street and Scotty Stevenson. Both are extraordinary broadcasters and humans, and I was lucky to be mentored by them. They nurtured me in a lovely way. Melodie Robinson has absolutely set the bar for female commentators, and she gave me a great opportunity at the Olympic Games last year.

Can you give an example of any mistakes you made early in your commentary career?

I remember Murray McKinnon gave me a chance to interview Olympic javelin thrower Stuart Farquhar at the Porritt Classic. After every answer I just kept saying “awesome”. Murray pointed this out to me in a really supportive way that perhaps I should not be doing that. It made me realise it is good to have some reaction and be yourself, but maybe repeating the same reaction is not something I should be doing. Hopefully, I don’t do that today.

Who are some of your favourite people to interview?

Anyone who is engaging and prepared to be themselves. I remember interviewing Jacko Gill at ITM in Christchurch and I thought post his competition he planned to compete the next day at the Sola Power meet when in reality he had thrown at the Sola Power meet that morning. When I wished him good luck for tomorrow, he just looked at me like what planet are you on? It was great that straight away he was responsive and told me the truth. We are lucky in New Zealand athletics to have so many talented and people willing to share their stories. The more open people are helps creates a more genuine and authentic interview.

What are the skills needed to be a good interviewer?

It requires good listening skills because you have to make sure you don’t ask a question which has already been answered. Be open in your questioning and make sure you have watched the event.

What is the best part of the role?

It is that I get to watch the sport I love and that I get the opportunity to talk about it. I also get to see my friends do what they love on the track and in the field which is cool.

Why would you encourage other women to enter the world of broadcasting?

Because we need more female broadcasters. Research shows just 14 per cent of sports coverage is for women. We need more diverse voices. The majority of commentators are male and while there are many incredibly talented male journalists who work in sport more female voices are needed to help readdress the balance.

What advice would you give to a young female broadcaster?

Don’t be afraid to do some voluntary work to build up experience. Don’t be afraid to ask people questions and learn from the very best. Feel free to connect with them online or go for a coffee. I’ve found most people in broadcasting are very generous with their time and advice.

What are you most looking forward to about the Sir Graeme Douglas International presented by Harcourts Cooper & Co?

To see Tori Peeters throw some bombs in the women’s javelin. She has been in great shape over the last two classic meets. I know she has now put that disappointment of missing out on the Tokyo Olympics behind her and she is looking ahead to qualifying for the World Championships and Commonwealth Games.  I’m also looking forward to seeing Hamish Kerr compete on a great high jump surface and hopefully challenge his national record.

Why should people watch the livestream?

People won’t be able to go the stadium, so it is the only option to follow the action of what I’m sure will be a great night of athletics.

*Note Sky Sport Now is geo-blocked and cannot be accessed by anyone outside of New Zealand.

The Sir Graeme Douglas International presented by Harcourts Cooper & Co is hosted at the Douglas Track & Field in West Auckland. Both the event and venue are named in honour of Sir Graeme Douglas. Douglas Pharmaceuticals has sponsored the annual event since 2018 and is also an Athletics NZ major community partner, backing grassroots athletics nationwide.